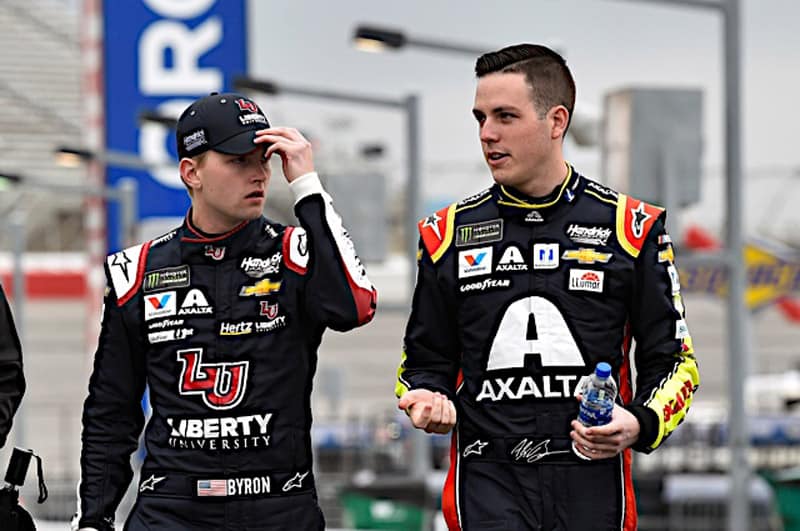 Last weekend at Las Vegas Motor Speedway, Alex Bowman and William Byron began their playoff runs with good finishes.  Bowman cruised to a sixth-place result, his best finish since winning at Chicagoland Speedway.  Byron spun out with less than 100 laps to go in the race but fought back to finish ninth.  Combined with Chase Elliott’s top five, it was a respectable night for the Hendrick Motorsports playoff drivers.

One week later, Bowman’s and Byron’s momentum is gone.  Both drivers struggled on Saturday night at Richmond Raceway, placing outside the top 20.  As a result, the Hendrick teammates find themselves in a difficult position.  With one race to go in the first round of the playoffs, Byron is on the bubble, just two points above the cut line.  The driver just behind him in 13th is Bowman.

Next week at Charlotte Motor Speedway’s ROVAL, Hendrick Motorsports faces the unenviable possibility of having one of its drivers knock the other out of the playoffs, or even both drivers failing to advance altogether.

While both Bowman and Byron struggled to find speed on Saturday, their race was complicated by an incident at the beginning of the second stage.  Just after the restart on lap 109, Bowman dove low into turn 1 trying to take the free pass position away from Austin Dillon.  The two drivers made contact, sending Dillon up the track and into Byron.  The contact from the No. 3 cut the No. 24’s left rear tire, and it looked as if Byron would have to pit under green.  But a few laps later, Dillon retaliated by spinning Bowman in turn 3, bringing out the caution.  It was a break for Byron, but he still lost a lot of track position in the pits under yellow, as did Bowman.  To top it off, neither Byron, Bowman or Dillon got the free pass.

The Hendrick teammates never recovered from the restart scramble.  Bowman finished 23rd with Byron in 24th, both four laps down by the end of the race.  Until Erik Jones’ post-race disqualification, they were the only playoff drivers to finish worse than 20th.  Suffice it to say the Richmond was a reminder of the issues with consistency that both Bowman and Byron have experienced over the last few months.

The first round of the Monster Energy NASCAR Cup Series playoffs will end with the second race at Charlotte Motor Speedway’s ROVAL configuration.  That is potentially good news for Bowman, who avoided the chaos of last year’s race and scored a top-five finish.  After entering the first ROVAL race just five points above the playoff cut line, Bowman was able to secure a good finish in a race where he needed one most.  Perhaps that will give the No. 88 team confidence as it prepares for this year’s race.

Byron, on the other hand, got swept up in the big restart crash at the ROVAL last year.  The No. 24 team cannot build off a positive result there from 2018, but that does not necessarily mean that Byron is doomed to be eliminated.  The Charlotte native has improved at a lot of tracks in his second season.  Knowing what to expect at the ROVAL, and of competition in the Cup Series in general, should help Byron a lot.  Don’t forget he has crew chief Chad Knaus on the pit box as well, who knows a thing or two about postseason success.

One more factor to consider is that there are a lot of drivers hovering around the bubble with Bowman and Byron.  Of those drivers, Kurt Busch is the most dangerous.  A poor start to the playoffs has left the No. 1 team 14 points below the cut line and needing a good result at the ROVAL to stay in the game.

However, Busch did well there last year, winning the pole and leading laps early in the race en route to a top-five finish.  Perhaps more importantly, Busch has been consistently faster than all the other bubble drivers this year. If there is one driver who could make things difficult for Bowman and Byron next week, it’s Busch.

From Bowman’s and Byron’s perspective, the most vulnerable drivers may actually be those ahead of them in points, particularly Aric Almirola and Ryan Newman.  Almirola is one point ahead of Byron and has not had a top-10 finish since July.  He has not had a top five since March. Combine those trends with a rough outing at the ROVAL last year, and Almirola’s chances of advancing don’t look so promising.

Newman, meanwhile, should be credited with an impressive start to the playoffs, but who knows if the No. 6 team’s recent speed will carry over to road courses.  Perhaps Newman, who finished 11th at the ROVAL last year, can keep the magic going for one more week.

Whatever competition it faces, Charlotte is going to be a critical race for Hendrick Motorsports. The organization has the opportunity to take three cars into the second round of the playoffs.  That would be a nice accomplishment for a team that has gone through a rebuilding phase in the last few years.  But Bowman and Byron have struggled with consistency throughout the season, and so far, the playoffs are no exception.

Hendrick better hope that the Las Vegas versions of the No. 24 and 88 teams show up at the ROVAL.  Another run like Richmond will take them both out of the game.

truth of the matter william byron will win tbid wk in n.c. hecwhat nascar needs smart hood kid good to promote the sport bring more people bacj to nascar way ahead of his time kid could race some competitor will be one of best ever think will win pole also