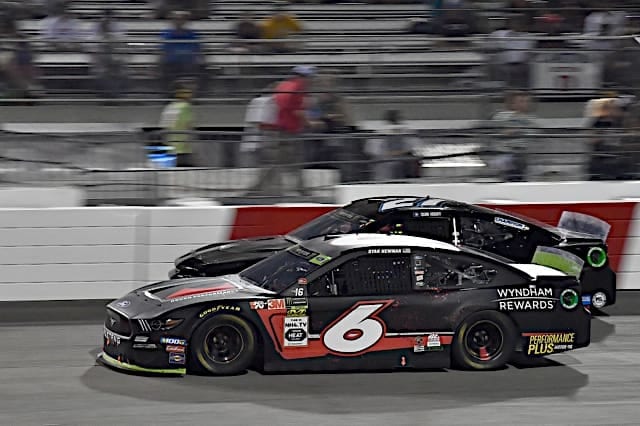 Unlike every other circuit on the Monster Energy Cup Series slate, and especially the other nine tracks that make up NASCAR’s postseason, we know next to nothing about the Charlotte Motor Speedway road course better known, of course, as the Roval. Following an eventful debut in the 2018 playoffs, a race won in thrilling fashion by Ryan Blaney, to date his last win at the Cup level, after some last lap, last corner hijinks between Jimmie Johnson and Martin Truex Jr. It’s genuinely hard to predict what might happen a second time around.

For the record, your top five last year was the aforementioned Blaney, Jamie McMurray, Clint Bowyer, Alex Bowman and Kurt Busch: all drivers who could do with a similar result this Sunday – bar the now retired Jamie Mac, of course. Adding to the weekend’s complexity, the venue for the final race of stage one of the 2019 postseason is not even the same track with the backstretch chicane having been redesigned in an attempt to stimulate passing opportunities. Given the points predicament of essentially half the playoff field, you would have to figure there will be many risks taken once the green flag drops. And once the second stage is complete and the dust settles somewhat on the points/positions on the track equation, expect the craziness to really dial up a notch.

After fairly pedestrian races earlier this season at Watkins Glen International and Sonoma Raceway, the other two road courses on the schedule, the last thing I’m expecting on Sunday is 109 uneventful, processional laps. Should really be a fun one.

Last week I wrote about the importance of a sixth-place finish to Alex Bowman at Las Vegas Motor Speedway, and this week I’m writing about the importance of a fifth-place result at Richmond Raceway for the Rocket Man, Ryan Newman. The driver of the No. 6 Roush Fenway Racing Ford Mustang finished 10th in the playoff opener at LVMS and sits in ninth place, 14 precious points north of the cutoff line following a second straight solid playoff finish.

“The best team performance all-around throughout the entire weekend,” Newman said after getting out of the car at Richmond. “We failed at qualifying. We got the car too tight, but, overall, just a great team effort to get the Roush Performance Ford a good run.”

Sunday’s finish was just Newman’s second top five of the season, equaling his result from the summer race at Daytona International Speedway. In 2018, the final year of a five-year stint with Richard Childress Racing, the 20-year, 648-race Cup veteran didn’t pick up a single top five after seven such efforts in 2017. Throughout his long career Newman hasn’t exactly been known for his road course prowess: zero wins, one top-five finish, three top-10’s, 20 laps led at Watkins Glen; zero wins, two top-fives, eight top-10’s, 11 laps led at Sonoma Raceway with 18 starts at each venue. But even with stats that paint an ugly tale, given the way he’s racing and the speed he showed at Richmond, I’d back Newman to have enough veteran savvy to point his way into the next stage of the playoffs, something few expected when the green flag dropped in Las Vegas.

In the end, eighth place was quite enough — thank you very much — for Team Penske’s Josef Newgarden, as he picked up his second NTT IndyCar Series title in three years at WeatherTech Raceway Laguna Seca — the first time IndyCar had tackled the 2.238-mile circuit near Monterey, CA in 15 years.

Newgarden’s second championship saw him join Sam Hornish Jr. as the only American drivers to win a pair of open wheel titles in the last 25 years.

All told, it was a dominant championship-winning season for Newgarden, who finished with the most wins (4), the second most podium finishes (7), the equal best average start (5.5), the most laps led by quite some distance (490 laps, +222 laps more than 2nd), the best average finish (5.6), leading the championship essentially the entire season long.

With a 41-point lead in the bank, even on a double point final race weekend, it was very much Newgarden’s title to lose. Alexander Rossi, Simon Pagenaud and Scott Dixon were playing the role of plucky protagonists, hoping for not just a good personal run but also an error from the Hendersonville, TN native.

“I tried as hard as I could all weekend,” Pagenaud said. “You saw me drive with my heart. I won Indianapolis this year. There’s nothing to be disappointed about. We finished second. That’s the second time we’re second in the championship.”

The question now, though, is just how many titles can Newgarden win? At 28-years old, Dixon had two of his five titles to date. Will Power won his only title at 33-years old, Pagenaud won his at 32, while Ryan Hunter-Reay was 31. At the same age, Dario Franchitti was still some six years away from winning the first of his four championships. With Penske power and sponsors like Hitachi renewing, Newgarden is well placed to increase his number of titles in the next few years.

After 392 days, Sebastian Vettel finally won a long awaited 53rd Formula One victory. The last time the four-time champion took the checkers was back in August of 2018 at Circuit de Spa Francorchamps, or Spa as it’s more colloquially known.

Now, it’s fair to say the 13-year, 234-race veteran has endured a particularly difficult stretch in 2019 in an otherwise glittering career; a point he referenced openly and honestly in his post-race interview.

“I have taken a lot of energy from the messages and handwritten letters I have received,” Vettel said. “When you read the notes that people are struggling in life, and some were very intimate about it, it gets to you, so it gave me a lot of belief and confidence to keep on trying.”

Teammate Charles Leclerc had a significantly different perspective calling the team’s strategy of pitting Vettel first “not fair.” Leclerc, who was looking for a hattrick of wins, started from pole and finished second.

“I still need some explanations just to understand fully why this decision was taken,” Leclerc said. “Of course it’s always frustrating in the car because you only see your situation and then you don’t see everything else.”

Bigger picture-wise, despite Leclerc’s annoyance, he will not fail to have noticed the continued resurgence of Ferrari after a terrible first half of the season. It may come too late to unseat points leader Lewis Hamilton in 2019, but given where they started in 2019, it’s a vast improvement

And finally, this week, a quick reminder that although Joe Gibbs Racing, and Martin Truex Jr. in particular, look really, really strong, we still have eight long races to go before a series champion will be crowned.

“We’ve got work to do,” 2012 champion Brad Keselowski said of the challenge posed by the JGR outfit. “[JGR is] really strong and we’re not where we need to be to be able to beat them heads-up…we put down a great qualifying lap, got the first pit stall, had great pit stops and got to the lead, but just didn’t have the raw speed to keep it.”

Keselowski is right to express concern at JGR’s dominance, but does anyone really need reminding that at this exact same point in 2018, no-one was expecting Joey Logano to ride off with the championship? There’s still a lot of left (and a few right) turns left this season and plenty of miles to run before a champion is crowned in 2019.