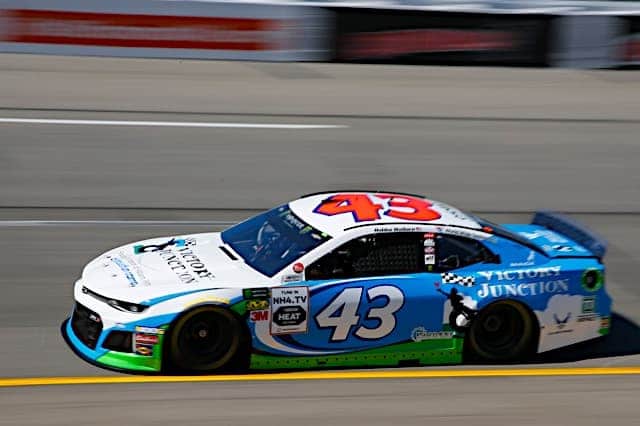 This time, Wallace took top underdog honors with his 12th-place showing at Richmond Raceway on Saturday night (Sept. 21). There was a bit more competition, however, as for the second week in a row, the big teams occupied the top 10 finishing positions. Wallace’s finish, while not as eyebrow raising as Indy, is still a positive step for a legendary team that just over a month ago boasted a season best of 15th. Now with three top 15s in the last five events, it seems possible that the No. 43 group may indeed be turning a corner. Wallace even remarked on the radio late in the event how he was surprised that he was able to run down and pass Chase Elliott for position in the closing laps.

Chris Buescher staggered home in 31st, ending his run of top-20 finishes at 16 in a row. The No. 37 hadn’t finished worse than 18th dating back to the Dover race in May. While it had to end eventually, it was still an impressive achievement for any team, let alone one like JTG Daugherty Racing. To put it in perspective, no other driver in the series has more 15 straight this season.

The Xfinity Series served as the appetizer on Friday night (Sept. 20) at Richmond. But similar to the way Christopher Bell devoured the competition, the big teams swallowed up all of the top finishing positions. Ryan Seig and Dillon Bassett in 12th and 13th were the lone underdog participants to register a top-15 result in the preliminary event.

Talladega Superspeedway has long been the place to go if it’s an underdog victory you want to see. One such driver won the very first race there and every decade has at least a couple examples of a nobody outrunning the somebodies.

In 2013, Front Row Motorsports was still in its early stages as a reasonably competitive NASCAR team. While in existence since 2005, and full-time since 2009, the organization had just begun to show any capability to compete.

David Gilliland came on board in 2010. Gilliland landed the first two top-10 finishes for the fledgling organization in 2011, with a third-place finish in the Daytona 500 and a ninth at Talladega. Then the team landed former Roush Fenway Racing veteran David Ragan in 2012. Ragan snagged finishes of fourth and seventh at the 2.66-mile Alabama tri-oval, so there were signs of serious potential from the duo.

In the 2013 Aaron’s 499, Matt Kenseth had about as good of a car as one can hope for at Talladega. He dominated, despite 30 lead changes that made the race appear more compelling than it really was. Even a more than two-hour rain delay that halted the event after 124 laps couldn’t derail the 2003 Cup champion.

As the laps wound down, a huge crash decimated the field. On the ensuing green-white-checkered restart, Carl Edwards wrestled the lead away and appeared to be on his way to victory. Then down the backstretch, Ragan sliced through the traffic, his teammate Gilliland shoving him forward. The timing on the move was perfect, and with Gilliland committed to pushing Ragan rather than making a move to pass him, the other cars had no chance to make a run. Ragan flashed across the stripe to take the first win for Front Row and owner Bob Jenkins.

Gilliland has since departed Front Row Racing to focus on his driver development team (DGR-Crosley) and the career of his son Todd Gilliland. Ragan will hang up his helmet in terms of racing full-time at the end of the season. Front Row collected a second trophy with a rainy Pocono win in 2016 and continues to chase victory each week with Ragan, Michael McDowell and rookie Matt Tifft.

What an awesome turn around from the start of the weekend. Team is continuing to grow and produce great races for us. After Friday I was looking forward to Sunday. Richmond has always been a struggle for us. Bold strategy call put us ahead of the game!

Not a bad night at Richmond Raceway. Ended up P12 after running much of the race in the top 10. A big thank you to everyone for supporting us. Race 2 of the playoffs is next weekend in Charlotte. pic.twitter.com/TUck7G8TPW

Don’t knock it if it works. ? pic.twitter.com/zvsVrRTPxK