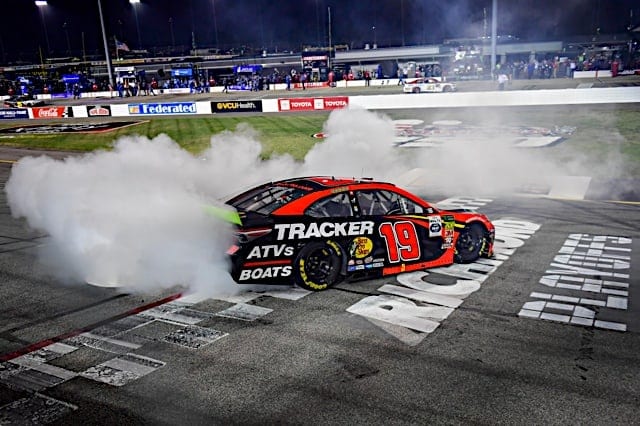 All three major NASCAR national touring series’ playoffs are underway with at least one playoff race completed. The NASCAR Gander Outdoors Truck Series already has finished its Round of 8 and its opening Round of 6 race at Talladega Superspeedway isn’t until October 12. The Monster Energy Monster Energy Cup Series and Xfinity Series raced at Richmond Raceway last weekend. The 2019 Federated Auto Parts 400 was the second race of the Round of 16, and the Go Bowling 250 was the opening salvo of the Xfinity Series Round of 12. With all the playoffs underway, who left the 0.75-mile short track in Richmond, VA, hot and who left it not?

Martin Truex Jr. swept both Cup races at Richmond in 2019 and he continues to rack up the playoff points. With his stage one win and victory, he has 41 playoff points, second-most of any driver this season. With his 41 points already in the bank, Truex has a large cushion over the Round of 12 cutline. With his Richmond win, Truex is the winningest driver in the Cup Series over the past three seasons. He and crew chief Cole Pearn have shown they are a tremendous duo regardless of organization. The No. 19 team certainly is the hottest team in Cup at the moment.

Erik Jones crossed the finish line in fourth place and appeared to be back in the playoff hunt without needing to win at the Charlotte Roval to advance to the next round. Then his No. 20 Toyota failed post-race inspection, nullifying his finishing position, stage points, and a 1-2-3-4 finish for Joe Gibbs Racing. Jones is 45 points below the Round of 16 cutline, almost assuredly needing to win the final race this round to keep his championship hopes alive.

Ryan Newman breathed a happy sigh of relief at Indianapolis Motor Speedway when he made the playoffs. Since then, the No. 6 team has started off the playoffs hot, positioning itself to advance to the Round of 12. After a 10th-place finish at Las Vegas Motor Speedway, Newman raced inside the top 10 for much of the Federated Auto Parts 400. He finished the second stage in fifth place and ultimately crossed the finish line in fifth place. Newman is only 14 points above 13th in points, but he has three drivers below him as a buffer. Newman and Roush Fenway Racing are getting hot at the right time of the year.

Alex Bowman made the playoffs via his victory at Chicagoland Speedway. Since then, he has struggled, with just a pair of top-10 finishes. At Richmond, he was involved in a lap 113 incident, and never improved upon his 20th-place starting position. The No. 88 car ultimately wound up four laps down in 23rd place, not the finish he needed as eight of the top 10 finishers were fellow playoff drivers. Bowman lost two spots in the championship standings to become the first driver below the Round of 16 cutline. If Bowman and Hendrick Motorsports fail to turnaround the performance of the No. 88 Chevrolet at the Roval this weekend, Bowman will bid his championship hopes farewell.

Denny Hamlin started this season off by winning the Daytona 500. After a 15th-place finish to kickoff the playoffs in Sin City, Hamlin likely was glad to return to one of his best tracks, Richmond. Though he didn’t lead any laps on Saturday night, Hamlin continued his mastery at the track. The No. 11 car started sixth, finished the first two stages in fourth and third place, respectively, and finished the race in third place. Even though the top two raced ahead of Hamlin as the laps wound down, the No. 11 stayed a good distance ahead of fourth place. Hamlin’s excellent race moved him up three positions in the championship standings, and is 54 points above the Round of 16 cutline. Mathematically, he has not clinched his berth to the next round, but it would take a disaster for Hamlin not to continue his drive for his first Cup Series championship.

William Byron suffered damage early in the race, and never rebounded, eventually finishing four laps down in 24th, the lowest of all playoff drivers. His saving grace was his teammate Bowman finished only one position ahead of him, but Byron holds the coveted 12th position heading into the cutoff race. He is only two points ahead of Bowman, four points ahead of Clint Bowyer and 14 points ahead of Kurt Busch. Byron crashed out of the inaugural race at the Charlotte Roval last season; he cannot afford any mishaps if he wants a chance to advance to the Round of 12.

Under the lights at a short track on a Saturday night, the No. 4 Stewart-Haas Racing Ford driven by Kevin Harvick looked quite sporty. The black really shined and Harvick sure had a fast car.

With his 11 stage points and his seventh-place finish, Harvick clinched his Round of 12 berth. No matter the chaos that transpires at the Charlotte Roval, Harvick will continue his question of hoping to win his second Cup Series championship.

Ah yes, the aforementioned Charlotte Roval is the last race in the Cup Series Round of 16. The Cup Series drivers will race in the Bank of America Roval 400. Who are the favorites to win the race? Because it is only the second Cup Series race held at the track, it is hard to predict, but keep an eye on Jimmie Johnson and Kyle Larson As you may recall, Johnson and Truex spun on the final lap coming to the checkered flag last year battling for the win. Without the pressure of the playoffs looming over his head, Johnson can focus solely on winning, not points racing.

As for Larson, he led the most laps last season in the inaugural event, and won the first stage. Coming into the race this weekend, the No. 42 team is 25 points ahead of the Round of 16 cutline. That amount isn’t insurmountable, but he is comfortably ahead where he can turn his attention to winning and earning playoff points for the Round of 12. The Bank of America Roval 400 will take place on Sunday, September 29 at 2 p.m. ET with TV coverage provided by NBC.

As for the Xfinity Series, the race at the Charlotte Roval is the second of three races in its Round of 12. Chase Briscoe won this race last season, but it is always hard to discount the “Big Three” in Xfinity Series races. Over the last two races, Christopher Bell has led the most laps and won the most recent race. Can he carry that momentum into the Charlotte Roval, also being the last driver to win on a road course at Road America? The Drive for the Cure 250 will take place on Saturday, September 28 at 3:30 p.m. ET with TV coverage provided by NBC Sports Network.