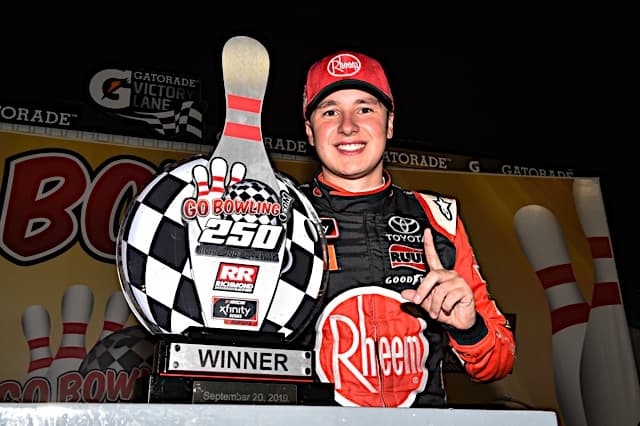 Christopher Bell will drive the No. 95 for Leavine Family Racing for the 2020 Monster Energy NASCAR Cup Series season, making the jump from the NASCAR Xfinity Series, the team announced Tuesday, Sept. 24.

Bell moves from Joe Gibbs Racing’s No. 20 car in NASCAR’s secondary series and will bring crew chief Jason Ratcliff with him. The pair has scored 14 victories over the past two seasons together, most recently a dominant performance at last weekend’s race at Richmond Raceway.

Leavine Family Racing welcomes @CBellRacing to the organization for the 2020 Monster Energy NASCAR Cup Series season as the driver of the No. 95 @Toyota Camry with sponsorship from @rheem and @procoretech.#Team95 pic.twitter.com/FbykWAntpE

He will inherit the seat currently occupied by Matt DiBenedetto in the Cup Series; DiBenedetto moves to Wood Brothers Racing for 2020.

Longtime sponsor Procore returns to the team, while Bell’s current primary sponsor, Rheem, will also move with him to the Cup Series.

A replacement for Bell in the Xfinity Series has not been announced.

Barring any starts before the end of 2019, the 2020 Daytona 500 will mark Bell’s debut in NASCAR’s premier series.

Seems to have worked out all around Glad for Bell and Ratcliff. Matt has a seat with the first family of the sport.

I don’t think C-Bell will do any better than Matt. But the team will benefit from more support by TOYOTA & JGR.