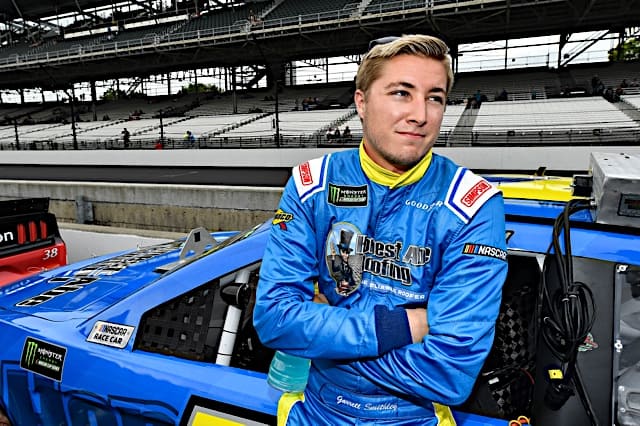 Over the past couple of months, chatter has picked up about Garrett Smithley‘s NASCAR future, though if you ask him, he wants to run as many laps as possible.

Smithley, 27, has spent the past four seasons at JD Motorsports, piloting the No. 0 Chevrolet to a best finish of 18th in the championship standings. In recent months, he’s split time between JDM in the Xfinity Series and running for Spire Motorsports, Premium Motorsports and Rick Ware Racing in the Monster Energy NASCAR Cup Series.

With 2020 right around the corner, Smithley isn’t sure what his future holds yet.

“I’ve run four years in Xfinity, and albeit I haven’t been in top-level equipment money-wise, I feel like I’ve done a pretty good job,” Smithley recently told Frontstretch. “I think I’ve proved myself. I feel like I’m ready. I said a long time ago that I wanted to make it full-time in the Cup Series by the time I was 30 [years old].

“There is a lot of stuff being talked about and going on. Obviously, I’m talking to Rick [Ware]. He gave me the opportunity to run the Southern 500 and the Brickyard 400 and who knows moving forward. At this point, I’m going to take it one race at a time.”

This season, Smithley has competed in eight Cup events, placing a season-best 28th at Indianapolis Motor Speedway. Because he’s gaining experience and turning laps, those who are closest to him aren’t hiding their feelings on what they believe he should do.

“Everybody that I’ve talked to around me hasn’t discouraged me from doing it because of where I’m at as a driver,” Smithley added. “I just want the maximum amount of laps that I can possibly get. In a perfect world, I would love to do what Ross [Chastain] did; run in all three series and run every race that I can.”

It’s more likely Smithley runs most of the Xfinity and Cup schedules in 2020, as he mentioned he’s been chatting with Johnny Davis about returning to JDM in the No. 0 car.

“I want to be in these garages for a long, long time,” Smithley said. “I don’t know what that looks like next year, but I know there’s a couple of different opportunities. I don’t think there’s a right or wrong answer. There still hasn’t been anything done.

“I’d still love to come back and run for Johnny next year, and we’re talking about that right now. In a perfect world, I’d get to be full-time in Cup and full-time in Xfinity and run as many laps as I possibly can.”

Davis confirmed to Frontstretch that the plan is for Smithley to return.

“We are having these talks and it is looking good,” Davis said via text, stating the team is looking to run four full-time cars for the third consecutive season.

Ware, on the other hand, admits Smithley is likely going to be an integral part of the team’s future next season, as he’s hoping to run three full-time teams.

“There is a very, very good chance that Garrett will be part of what we’re doing next year,” Ware said. “We would love to get him full-time, but he is for sure a big part of where we’re looking to go next year.

“We have a direct relationship with Garrett. Garrett’s definitely on our radar of things we’re working hard on things that we’re trying to solidify. We’re in a little bit different situation next year in that we’re wanting to take that next step in performance to where we’re at right now.”

The plan is to sprinkle Smithley into a few more races throughout the 2019 season, pushing him into one of the full-time rides next year.

If he gets in that Ware car for 2020, his career is effectively over. At Richmond the #52 & #53 were getting lapped every 18-20 laps and it was an embarrassment. Actually I’m being kind: I was there, and those cars along with the #77 should fave been black flagged. Kyle Busch was right. Don’t do it Garrett – if you’re good enough, perhaps a Front Row Racing seat will open up…

Tom B
Reply to  Matty

You’re correct. There is no way they are making minimum speed and if they are common sense should black flag them after being lapped 6 times.