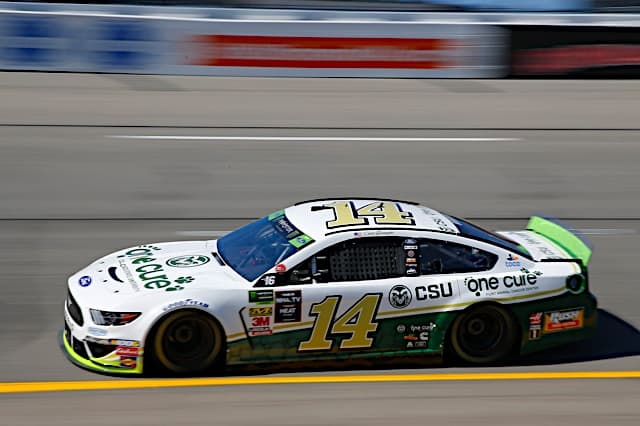 After Saturday night’s Monster Energy NASCAR Cup Series race at Richmond, many drivers complained, once again, that passing was very difficult with the current racing package. Clint Bowyer had some interesting ideas, saying maybe a new package should be put into place for short tracks or that PJ1 should be used at Richmond.

Has this package taken away from the excitement of short tracks? What is the solution?

As we head into the final race of the Round of 16, we reflect back to when Talladega served as a cutoff race, specifically from 2014-2016. Now with the Charlotte ROVAL proving to be just as much of a wild card after last year’s debut, one must wonder what wild antics might alter the playoff picture.

Should the ROVAL really be the final race of a round? Would it be more “fair” to have a standard mile-and-a-half race finish the round instead? Or should every cutoff race be some sort of wild card?

Q: Clint Bowyer came out with some interesting comments about the package and Richmond from Saturday night’s race saying how it doesn’t match up well. Do you agree this package has hurt short tracks? – Alexander S., Townson, MD

A: I know a lot of people will say this package has hurt racing everywhere, but I found Bowyer’s comments to be accurate, albeit with some unneeded hyperbole.

This package obviously has a ton of downforce and, even with the 750 horsepower, it is still difficult to pass. Drivers complained back in April that it was more difficult to pass than ever at Richmond and it proved to be true. Green flag passes were at a minimum in last week’s race, and April’s race was no better.

Richmond is a fantastic racetrack, with awesome racing. Honestly, we should not discredit the track for the way the races have gone in the Cup Series this season. This package does not agree with the track — that is the unfortunate truth.

While Bowyer mentioned that PJ1 may be a solution for the time being, I am not sure it would. We have seen it work at tracks like Bristol, but I’m doubtful that Richmond is the type of track that would benefit from the use of PJ1.

Is there a solution other than a new package? Unfortunately, no. But short of any drastic changes, experimenting with PJ1 seems to be the racetrack’s best option to bring back the kind of racing it has showcased in the past.

Short track racing as a whole seems to have suffered with the current package. While Bristol has seen two fantastic races, we have heard the displeasure of fans and drivers about the racing at the other two, Martinsville and Richmond. Drivers complained of aero push, of all things, in Martinsville — something you never would have heard in years gone by.

Should NASCAR look to change something in 2020? Possibly, but we know the sport is very much in a cycle of change and experimentation. They will look for a solution, even if it is not what most fans want to see. Less downforce would be the obvious choice here, but again, NASCAR will do what they have to.

With one short track race remaining this season, it will be interesting to see what kind of a show gets put on in Martinsville next month. If it is just as bad as it was in March, it may be time to change the package once again.

Q: Is the ROVAL being a cutoff race a great idea by NASCAR or just an absolute horrific one with the chance at catastrophe every second? Edward H., Alexandria, VA

A: Talladega was the cutoff race up until 2016, so I would say that the ROVAL is fine where it is in the Playoffs.

If you ask me, Talladega is more of a wildcard these days than any road course. Drivers will “learn” the ROVAL and, once they do, we may see cleaner races in the future. Talladega, on the other hand, will never stop being a wild card.

As of now, though, the ROVAL is still a huge wildcard in these playoffs, as we saw last season.

Even with experience on the ROVAL in last years race, drivers are still saying they don’t know what to expect this weekend. The added chicane on the backstretch creates a new passing zone and therefore, forces drivers to re-learn that part of the track. The rest of the track is the same.

Is it a good idea to have it as a cutoff race? Yes, it definitely is. Why? Because we like action, we like unpredictability, and we like hard racing every lap. That is what the ROVAL provides us with.

No offense to any other track, but if you take a mile and a half track and put it as the cutoff as we see with Kansas next month, the racing might be good, but the race likely won’t be as close nor will it be as unpredictable. The ROVAL is a track where you have to hit your marks every lap or else you’re going in the fence and your day, and possibly your season, is ruined.

One day, it probably will not be a cutoff race any longer. As of now, though, it is a fantastic idea to have it where it is on the schedule. Last season, there were many mixed feelings on the placement of this race. One year later, the word of the week is “excitement”. We know we are in for a treat this weekend because the racing will be absolutely amazing, and we are guaranteed for a great end to the first round of the playoffs for Cup.

Let us not forget the Xfinity Series and how many guys will be making their first start there. Lack of experience often leads to more mistakes — meaning some potentially tense moments for the rest of us to watch.

All I can tell you is you won’t want to miss it!

Solution for the short tracks is simple: Get the cars up off the ground, remove splitter, sideskirts, lower the rear spoiler and put them on a harder compound tire and completely unrestrict the engine. Oh yeah, might want to beef up front/rear bumpers and all 4 fenderwell openings. Then put all the drivers in a big jar, shake it up until they’re good and mad, then turn ’em loose to race!!

Sounds good except for the hard tires. Tire wear adds intrigue to a race. Abuse your tires, fall back. Take care of your tires and move forward late in a run. Ideally the pit window should be defined by tires not gas mileage.

Good point about tire deg.! I wonder if they can/do make a progressive wear tire? Super soft outer that gets harder as it wears. My thought is we typically see a soft tire get so worn it will blow out and cause a wreck – maybe a harder underlying compound after the soft compound wears off could prevent blow outs while still giving the “take care of your tires for the late charge” strategy option?

It has to have been done, I know I can’t be the only one to think about this in the history of auto racing – I’m not that smart!

Nope, if your tires wear out it’s on you to come in and pit before they blow. If they want to stay out there until it blows that’s on them. It should be of no concern to NASCAR or Goodyear to save teams from their own bad decisions.

My thinking is I’d rather the tires stay inflated and give up 10-15 seconds or so per lap than blow up and bring about 20 laps of caution and another hour of commercials… Ok, maybe a slight exaggeration there, but not by much!

OK you have a point there Jeremy. As long as the harder portion of the tire was at least 10 seconds slower I suppose that would be OK. Anything to lessen caution laps is a good thing. Maybe the could just run inner liners at all tracks.

Off topic a bit, but have seen zero reporting on what Rick Hendrick confirmed while on the Dale Jr podcast, namely that the next gen Cup cars will have composite bodies; also revealed that teams will no longer build their own chassis, instead buying them from one approved supplier.

Starting to sound like the Car Of Tomorrow again.

I also see no problem with the ROVAL (or Dega) as a cutoff race, especially in the current iteration of NASCAR. When the chase was implemented, and more specifically when they adopted the winner take all crapshoot final race, NASCAR proved they place more of an emphasis on excitement rather than fairness when determining the season champion. So have at it.