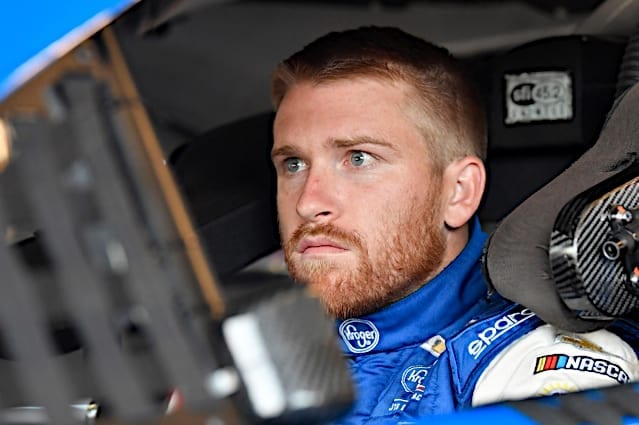 Roush Fenway Racing has announced that Chris Buescher will join the team in No. 17 car for the 2020 Monster Energy NASCAR Cup Series season. Buescher will replace Ricky Stenhouse Jr., who is parting with the team at the end of the current campaign.

NEWS: Buescher to Take Wheel of Roush Fenway’s No. 17 in 2020; Team to Part Ways with Stenhouse Jr.https://t.co/qdxVfRIExs pic.twitter.com/WlyrtXqEtD

“We can’t say enough about Ricky and his contributions to Roush Fenway Racing,” team co-owner Jack Roush said in the team’s press release. “We’re proud to have been a part of Ricky’s development from ARCA to Xfinity and ultimately the Cup Series. He has served as a great representative to our partners, while helping to accumulate numerous accolades, wins and multiple championships on the racetrack. We wish him well as he enters the next chapter of his career.”

This is a reunion of sorts, as Buescher first drove for RFR in the Xfinity Series in 2011. He also won the 2015 Xfinity Series championship in the team’s No. 60 car.

“We are certainly excited to have Chris back in the fold at Roush Fenway Racing,” Roush said. “He has a long history with our organization and we’ve always been a big fan of Chris and his racing style. We have watched his progress with great interest over the last couple of seasons and we are looking forward to having him in the No. 17 as we continue to grow our program next season.”

Buescher has one win, four top fives and 12 top 10s in his Cup Series career driving for Front Row Motorsports in 2015-2016 and JTG-Daugherty Racing since 2017.

“We had somewhat of an idea the last day and a half that this possibly could happen,” Daugherty said on SiriusXM NASCAR Radio. “We didn’t understand why it would happen, working very hard, going back and forth trying to get all of our numbers together, trying to get the contract done. We get to today and find out he’s going to go in a different direction. Totally caught us off guard because we were already building stuff for next season as everybody else does, getting ready and preparing.

“We were in the full throes of trying to put something significant together and thought we had it done, pretty close to it, and things changed. Just like that.”

On what the team is looking for in the 2020 season:

“I think it would be difficult to have two guys in the series or someone in the series with Ryan [Preece] who doesn’t have any experience. That would be just absolutely, that would be miserable at times. We’re going to look. We would like to find someone with some experience we can continue to grow. We’ve taken good steps with that 37 car this year, really positive steps. We’d like to continue that. We don’t want to go backwards. It’s a tough situation to be in as an owner and a team, but we’re pretty resilient and we’ll figure it out. We’re going to give somebody a heck of an opportunity.”

Late in the evening Wednesday, Buescher issued a statement via his Twitter page:

Stenhouse’s 2020 plans have yet to be announced.

About time Roush got rid of the dart with no feathers. If I owned a small team, I sure wouldn’t want Ricky tearing up my cars every week.

5 years too late. He was never a good replacement for Kenseth or Carl Edwards

Roush kept both Stenhouse and Trevor Bayne well past their expiration dates. Hopefully this 17 team will be respectable again with Buescher.

Surprised it has taken this long for Sticky to be let go. He never did have a break-through season (winning a couple of crapshoot RP races doesn’t prove much). I just figured Roush couldn’t find anyone willing to drive for less so he kept him. Also, it was hard to tell where Roush’s shortcoming as a team ended and Ricky’s shortcoming as a driver began. I think Newman coming in a making the playoffs in his first year there gave Roush the measuring stick he needed to make the change.
I wonder if Aaron Rogers has a sister.

Jack to Brad: “Remember that driver I ‘loaned’ you”?

Stenhouse still thinks he’s signed through 2021 lol read the fine print Ricky, didn’t Danica teach you more than which spoon to use.

Now grandpa needs to let his grandson go to complete the idiot wipe out.

Wow, after one bad race you suddenly become the target over everyone’s shoulder. Stenhouse outperformed his equipment way before Newman came along. He was getting top-15s and top 10s while Trevor Bayne was stuck in the mid-pack(20th-30th). I still don’t understand why in the NASCAR community you are judged by one incident in one race just like Newman was judged after blocking DiBenedetto. As for the people who are about to comment that Stenhouse spun Truex, Truex spun Bailey Currey at Charlotte and had no media attention for it because it wasn’t one of the more popular drivers. For the Busecher fans, he was only at an on-par ride because of his lucky dog win at Pocono. JTG Daugherty Racing was performing at a stellar rate for a single car team with AJ Allmendinger getting top 15s consistently. I do think that Buescher deserves a Roush Ride, but that should’ve happened in 2016 after his Xfinity championship in ’15.