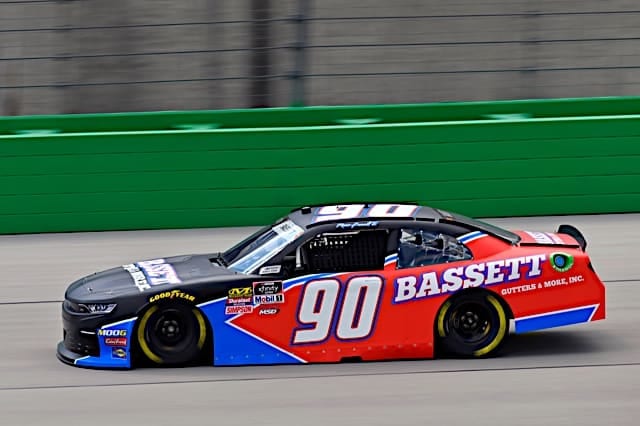 It’s not often a pair of siblings make it to the top of any particular sport, but in racing it’s a bit different.

NASCAR is built on families. The Earnhardt, Petty, Allison, Waltrip, Labonte, Busch and Burton families — to name a few — all have had siblings compete against each other at the highest level of motorsports. Now, you can add Bassett to that list.

Sure, both Ronnie Bassett Jr. and Dillon Bassett are fresh to the NASCAR Xfinity Series this season for DGM Racing, but the brothers have had one hell of a rivalry racing through the ranks, sometimes ending in fisticuffs.

“We raced each other every weekend,” Ronnie recently told Frontstretch about racing against his brother growing up. “When he turned eight, we were running in the same division. We ran late models together, K&N [Pro Series East] cars, bandoleros, legend cars – we’ve had some knock-down dragouts.

“He’s wrecked me before, and I’ve wrecked him. It wasn’t a good thing at the end of the day.”

But the passion the two drivers have shown toward motorsports started from a young age. Both watched their father, Ronnie Bassett Sr., compete as high as late models, and they knew that racing was what they wanted to do as a profession when they got older.

Those words motivated both Bassett brothers to learn the ins and outs of every racecar they’ve ever competed in. And though very close off the track, the two drivers were quite possibly each other’s fiercest competitor on track.

“There was a little bit of a rivalry there. It got heated a few times. I wrecked him a few times, and he wrecked me. That’s just part of it, I guess.”

Ronnie agrees that his brother was his biggest competition, though there was never really any bad blood, even if it cost one of them a win or even a title.

“We were at the Summer Shootout [at Charlotte Motor Speedway] one night, and I think he was in the B-Main because something happened in our heat races – I can’t remember exactly,” Ronnie said. “I just remember the last-chance race, he ended up wrecking me, I missed the race and I lost the championship. He made the race and he probably wrecked out on lap 10, but he made the race. I saw my dad jack him up that night.

“We were at Caraway [Speedway in Sophia, N.C.] running a late model, he had the best car all day – I was a second-place car, he had a good car – and we had a restart with about 15 to go. And the only chance I had was to clear him in turn 1 on the restart. When I thought I was clear, he drove a little deeper and wrecked us.

Dillon remembers that night vividly, and his father was none too pleased because ultimately it tore up equipment, and that’s never good when you’re running off the family business (Bassett Gutters and More) to race.

“He doesn’t like us to settle it on the racetrack because at the end of the day, tearing up racecars means we’re going to do less racing because that’s money that we’re throwing away for being stupid,” Dillon said. “He doesn’t agree with wrecking racecars just because you get mad at somebody. We’ve had our fair share of go-arounds.”

However, it wasn’t always accidents or bandaged fenders that pissed the two drivers off with each other. Sometimes, it was personal — bringing their home life into the mix, despite being roughly eight and nine years old.

Even though Dillon can’t remember why he was most upset with Ronnie, he lived up to his pre-race word one night at Orlando Speedworld.

“We got in an argument before the race even started about something stupid, and I told him I’m going to wreck you tonight,” Dillon recalled. “He goes, ‘Yeah, right.’ I said, ‘I’m telling you, I’m going to wreck you.’ So, you know what I did? I waited on him, he went up there to try and lap me and I wrecked him. He didn’t finish the race and lost the championship. My dad was not happy.”

The two drivers have always raced each other hard and will continue to do so despite having a mutual respect for each other.

“I think we’re both tougher on each other,” Ronnie said. “We want to beat each other just as bad as I want to beat Josh [Williams] or Josh wants to beat me. It’s just one of them things where it’s a brotherly rivalry.”

Together, they’ve competed in 14 of 27 races and were scheduled to run against each other at Charlotte Motor Speedway in the spring, but Dillon, driving the No. 90 car, failed to qualify for the race.

Overall, the transition to Xfinity has been a whirlwind for the two drivers, as they’ve purchased three chassis, work on them at their own race shop (in Welcome, N.C.), bring them to the track and run under the DGM banner.

“It’s been up and down, but it’s been a learning experience is the main thing,” Ronnie said. “I’m hoping to get as much experience as we can this year so next year we can fine tune and be able to run more races and finish inside the top 15.”

“The cars drive like a Cadillac where the K&N cars drove like school buses,” Dillon said. “The biggest thing I’m trying to learn is the aero part, because by themselves, they’re a Cadillac. But as soon as you get around another racecar, it drives completely different.”

At Iowa Speedway in the late days of July, Ronnie spotted for Dillon, who was running inside the top 15 when he hit a sweeper truck coming onto pit road.

Despite that incident and all of their previous run-ins, the brothers are happy to have each other to lean on moving up the ranks of NASCAR.

“We set our cars up close to the same, but he likes a little different driving style than I do, whether it’s free, tight or whatever,” Ronnie stated. “It’s been a help to have two of us being able to get in and out and translate how the car is handling and what we could have progressed on to make better for the future.”

“If there’s something that one of us is struggling with, we can go to the other,” he stated. “When he goes out on the racetrack, I’m not just watching to see what the car is doing, I’m watching to see what he’s doing and what other cars are doing and how I can help him. He’s doing the same thing for me. It makes the transition a lot easier.”

Moving forward, the Bassetts are still relying on the family business to get to the racetrack, so if, “Pops says we’re going racing, we’ll race.”

These brothers have done it the right way, from the old UARA series to late models in the Carolinas to K&N East, to Xfinity. Those who follow short track racing know these lads. Wish they were a little friendlier at the track and more media savvy, but they’ll learn as they grow older. Good for these Bassett’s – Cup racing and engineering know-how are a whole different level at the Monster series. There, the 40th best driver was a champion somewhere…..