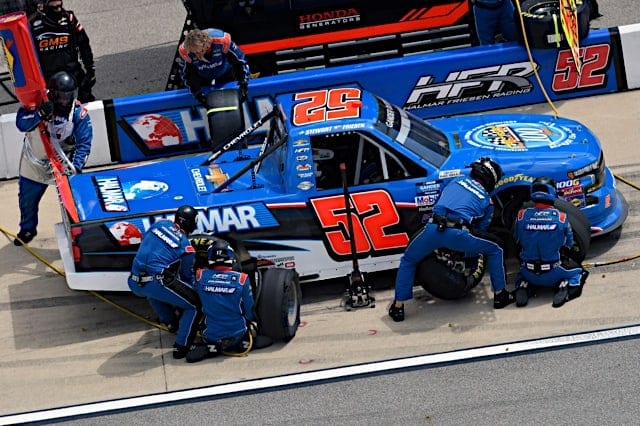 Per a source, it's becoming more & more likely that pit stops will be eliminated for both the Gander Outdoor & Xfinity Series'.

Supposedly, this could kick-off in 2020 with the chance that pit stops could be eliminated in the Cup Series by 2021.

First off, what is the validity of this tweet? FOX Sports analyst Bob Pockrass responded to someone questioning the truth and of this tweet.

This is the time of year where NASCAR floats lots of ideas to teams. Some of them come to fruition, many do not. I have not gotten a sense with any certainty that eliminating pit stops in trucks and/or Xfinity is the path NASCAR will end up going. https://t.co/4eK4hBuDTm

Furthermore, Pockrass noted that while the NASCAR K&N Pro Series has breaks instead of pit stops, this idea has a long way to go before coming to fruition.

they already do it in K&N with breaks. but, again, I caution, it is something NASCAR has discussed but no indication that it is far along the road to actually happening.

All three of the main NASCAR series and the ARCA Menards Series have live pit stops. Frontstretch‘s Bryan Davis Keith has repeatedly pleaded in his ARCA Racing Series Breakdowns for NASCAR to retain live pit stops once it assumes full control over ARCA next season.

When the Truck Series began, it did not have live pit stops. Instead, it had five-minute halftime breaks, which at the time were very popular among fans and TV networks. In 1998, NASCAR introduced competition cautions, and the following year, live pit stops were added to the Truck Series.

Would abolishing live pit stops and returning to a halftime break be good for the Truck Series? In short, yes and no.

As Gray Gaulding noted, if these novice pit crew members want to eventually pit for a Cup Series team, they need to practice first. Practice makes perfect, and the Truck Series and Xfinity Series races are those practice opportunities.

When NASCAR implemented stage breaks into all three main series, it gave Truck Series teams a bit of a reprieve in case they lacked top-notch pit crews. If they entered pit road on the lead lap at the end of the stage, no matter how slow their pit stops, they almost always stayed on the lead lap.

Live pit stops greatly affect the outcome of races, and NASCAR would be doing a disservice to the Truck Series by abolishing live pit stops.

Eliminate live pit stops and save the teams some money.

I'd personally love to see that back in the truck series, help the teams to stop hemorrhaging cash and bring the series back to its early roots

Would the entry lists resemble more of fields at short tracks or at Eldora Speedway with the lowered costs? That is something to consider. Given NASCAR does not release the purses for any of its series, lowering costs by abolishing live pits stops for the Truck Series could be a healthy injection into the series.

The absence of live pit stops could be appealing for fans, TV networks and prospective racetracks. Fans would see another restart, which would add more excitement to races. TV networks could use halftime breaks or competition cautions to go to commercial breaks, thereby allowing for more green-flag coverage. During competition cautions or halftime breaks, the pit-road reporters could talk to crew chiefs, the announcers could talk to more drivers, etc., giving fans more in-depth coverage during races.

WTF? I remember when the trucks had a break instead of pit stops. It was stupid then and it would be even more stupid now. With the stage breaks green flag pit stops have already become rare, even in the cup series so why bother.

IF they make any changes, I think they should do what most open wheel series do – no jackman running around, one man fueling, one man on each wheel to change tires, and one other allowed to make adjustments.

Instead of halfway breaks to help the pit crews, how about just banning Cup pit crews from pitting Cup drivers in the lower series. If the Cup drivers are so great, they would still be able to do good with the crews from that series.

If this were something NASCAR was considering, they would have one of their controlled mouthpieces like Dave Moody or Pete Pistone float the idea. In the past, they used the traveling press like the late Tom Higgins to get feedback on their ideas.
Since neither of these are singing the praises of this really bad idea, the only place that it might happen is the truck series. And for that one it make sense.

I enjoyed the truck series when it raced short tracks only. Liked recent article about the tracks that closed, miss The ROCK, North Wilksboro, Bethlehem and Flemington, where incidentally I got to pit Doug George’s Ortho truck as I had won a Craftsman contest at Sears and got to help swap engine, decal new truck race morning and do the catch can during that 5 minute break. Got the pictures to prove it, it was a weekly contest that year. I agreed with the way trucks started with some money saving options. Bring back those good old days. Only bad thing was at some tracks it took years to get a ticket like to Bristol night race or New Hampshire. But you had a great fan base back then, now it’s a joke…

The Truck Series is in major need of cost reduction. Unfortunately the genius’ at NASCAR are too headstrong to see the errors in their ways.

– Discontinue relationship with Illmor. Go with K&N Yates engine instead. 1/2 cost of Illmor with same power, and greater durability. K&N engine is essentially a SLM type Chevrolet LS based engine. Simple, effective, and plentiful. Everything necessary to reduce the barrier of entry.

– No live pit stops. Controlled cautions only. If caution is waived all cars can enter. The order you enter is the order you leave pit road. Have 3 laps to complete service. Fall into line behind cars that stayed out. Go green lap 5 from original caution. Look at Eldora and how that worked out….and replicate it.

– Reduce suctioning fees. Get the Trucks off of ALL Superspeedways. No tracks greater than 1.25 miles.