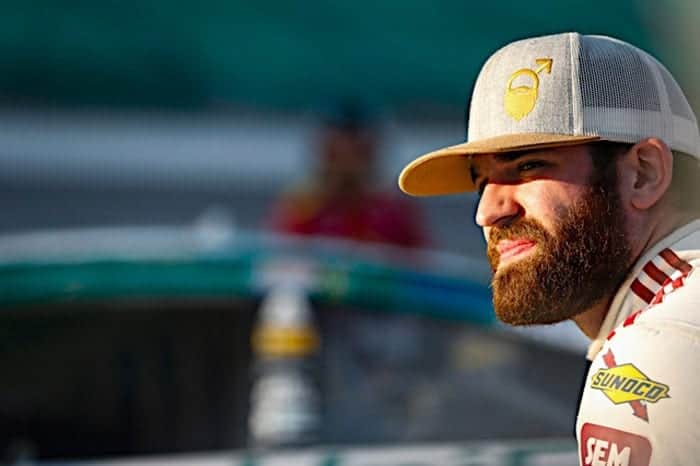 Is the Charlotte Motor Speedway ROVAL the wildest of cards in a playoff format that also includes races at Talladega Superspeedway and Martinsville Speedway?

No, but really. Until about two or three years from now, the ROVAL will be the greatest unknown. Anything can happen, and the only thing we know for absolute certain is that Martin Truex Jr., Kyle Busch and Kevin Harvick are all locked into the next round and have absolutely nothing to lose. I wouldn’t even be that comfortable if I were Joey Logano, and he has a 50-point cushion over the cut-off spot!

Imagine the mindset of guys like Ryan Blaney (+8 over the cut-off), Aric Almirola (+3) and William Byron (+2). Then remember they actually have something in their advantage, at least compared to Alex Bowman (-2), Clint Bowyer (-4) and Kurt Busch (-14). Yes, Kurt Busch, also known as Probable Bracket Buster, is in a 14-point hole entering the ROVAL.

Granted, Talladega has more varied possibilities; I can’t see Landon Cassill winning this race. But Talladega is no longer a cut-off race, so there’s significantly less pressure for these teams near the line when entering there.

What will come of Erik Jones?

After a race that marked 20 years since the Joe Gibbs Racing No. 20 won its first Monster Energy Cup Series race, the car became the first Cup car to be disqualified in many, many years.

Driver Erik Jones now enters the ROVAL with a near-impossible points gap to make up. There’s a slight chance that Jones could point his way into the next round. But being down by 45 points heading into this weekend, Jones would need a lot of help if he wants to point his way in.

Jones is not a bad road course driver. The Michigan native has five top-10 finishes in seven Cup road course starts. But one of those two non-top-10 efforts came last year at the ROVAL, where Jones finished a dismal 30th and didn’t even accumulate any stage points. And just two of those top-10 finishes were in the top five.

If Jones is going to make it, the only way he can truly ensure advancement is to straight up win the race. And given his good, not great, record at road courses, it’s not looking likely of him doing that.

Could Corey LaJoie get his big break?

Roush Fenway Racing’s sudden announcement that Chris Buescher would be rejoining the team was a sudden bucket of ice water for both Ricky Stenhouse Jr. and JTG Daugherty Racing.

Some fresh details on No. 17 here from a @SiriusXMNASCAR radio interview with @NewmarkRFR, including:

–Deal was finalized Tuesday night; Stenhouse was informed Wednesday;
–Roush had "residual rights" to Buescher;
–Was a decision made by Jack Roush and board.

Both being informed of this either Tuesday night or Wednesday morning, if true, is a very mean thing for RFR to do. Even if JTG was aware that Buescher had retained some sort of relationship with RFR (and hopefully it did, or else its legal department might have just lost its jobs), it’s still rude for the team to now have to rally to find a new franchise driver before the end of the year.

One obvious option JTG has is Stenhouse. Stenhouse, to his credit, is a Cup veteran who can be competitive on short tracks/former restrictor-plate tracks and can be a stable option for a team without many. But he has also been an underachiever, finishing behind at least one teammate in points in all but one season at the Cup level (without counting 2018, as that was the year Trevor Bayne and Matt Kenseth ended up splitting the No. 6 Ford).

Daniel Hemric hasn’t publicly committed to a team quite yet, and JTG was already supposedly interested in him last year. Then Hemric was promoted internally in Richard Childress Racing, and JTG instead settled with Ryan Preece. It’s been fairly obvious a year later, however, that Hemric isn’t quite ready yet for Cup, or should at the very least go to a team with a strong veteran prescience.

One of the problems with trying to find a new driver in the Xfinity Series to promote to the Cup level is that most of the top prospects are tied lock, stock and barrel with an established Cup team, especially the non-Chevrolet drivers. The bow-tie’s greatest weakness in NASCAR has become crystal clear: its refusal to actively assist with new driver development, unlike Ford or especially Toyota, has led to situations such as this, because it’s not like it can go and sign Chase Briscoe. Maybe it would have signed Justin Allgaier if it had known two months ago that this was all going to go down, but it didn’t, so now it can’t.

Its best possible option is Corey LaJoie. Over the last few years, LaJoie has grown as both a driver and a person. He’s been fantastic at getting the most out of whatever bad equipment he’s been relegated to while also being a great representative for the sport in media obligations. The great stuff he did with charity at Watkins Glen International and his ability to eventually get the whole sport involved was fun to see.

It’s about time for LaJoie to get a good shot in decent Cup equipment, and JTG seems like the perfect opportunity for the rising star.

One interesting aspect of Silly Season this year that not a lot of people have brought up has been the No. 20 Toyota Supra in NXS competition. With both driver Christopher Bell and crew chief Jason Ratcliff moving up together, this leaves the 2019 championship favorite from out of the Joe Gibbs Racing stable with no identity in 2020.

You could tell that the team was banking on Todd Gilliland to have an outstanding year in the Gander Outdoors Truck Series, enough so to where it would have been common sense to move him up. Instead, Gilliland is probably heading over to his dad’s team, the B team for TRD in the series, after a disappointing season with Kyle Busch Motorsports.

Because of Gilliand’s lackluster season, JGR is stuck. It could get one of the three drivers profiled above, the one that isn’t going to either JTG or to Front Row Motorsports, as a stopgap. But a stopgap year isn’t really in JGR’s MO.

Harrison Burton has arguably been much better in his limited NXS starts than he has in his full-time Truck Series ride. But he’s still just 18 and probably needs another season of Truck racing under his belt before making the jump. It could promote Gilliland anyway, but his lack of NXS starts this season so far or scheduled starts in the last two months of the season speaks volumes.

One telling sign of the team’s future: when Matt DiBenedetto drove for the team at Road America, he mentioned that an NXS ride for him with the team would not be possible, as JGR already had its schedule straight for 2020. So whatever Coach is going to do with this team, he’s known what it will be for at least a couple of months now.

Mean? Rude? Welcome to Big Business 101, where we learn that nice guys get compliments and “mean” guys get rich.

If available, I think Ross Chastain would be the best choice for the 37. He constantly drives better than his equipment and has experience in all 3 series. I can’t believe he is not being mentioned.