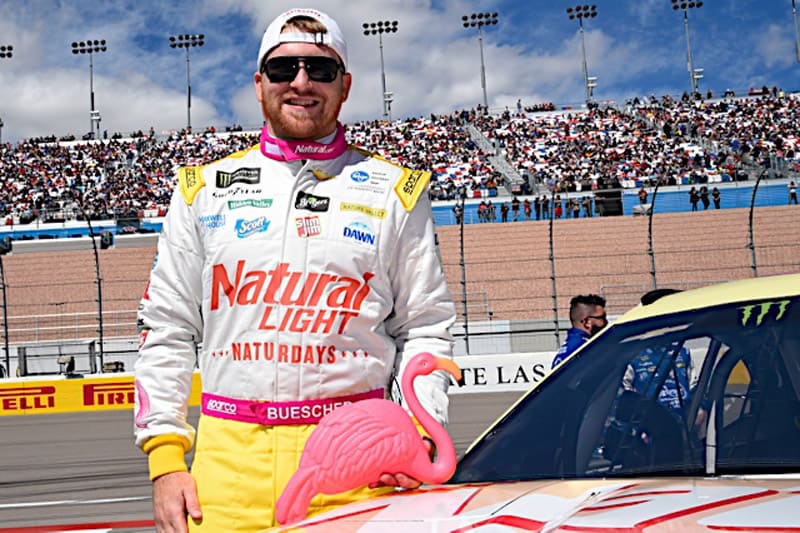 Jack Roush has spoken. Unfortunately, that means the folks at Natty Light might be a bit upset.

But bringing Chris Buescher back is the smartest move Roush Fenway Racing could make for its Monster Energy NASCAR Cup Series.

While it might be a surprise, considering that Buescher and Roush both claimed they officially split ways on Aug. 18, 2017, the ultimate plot twist just took place.

RFR President Steve Newmark said in an interview with SiriusXM NASCAR Radio late Wednesday evening, Sept. 25, that Buescher’s people reached out to the team after they realized there was a strange clause in their contract. If JTG Daugherty Racing, Buescher’s employer since 2017, didn’t re-sign its driver by a certain date, Roush could pick up an option and bring him back.

Obviously, this caught JTG’s people by surprise, almost as if they didn’t remember Buescher’s services were technically on loan when he originally signed with the team entering the 2017 season.

“I think even we weren’t aware that those instances were going to arise here, but because of how things unfolded at JTG it ended up we got a call recently from Chris and his representative saying, ‘Hey, as a heads up, the condition happened and we’re giving you notice that some of the rights under this residual option are available,'” Newmark said on the radio station.

Now Roush suddenly has a rather solid lineup. OK, it isn’t back to a three-car team, but it’s still a chance to get the squad back into victory lane.

Buescher, who won the 2015 Xfinity Series title with Roush, had a streak of 16 straight races of top-20 finishes, an astonishing accomplishment for the small JTG squad. The driver of the No. 37 machine is on the cusp of giving JTG a top-20 finish in the standings for the first time since AJ Allmendinger did so in 2016, ending the year in 19th, a year prior to the group’s expansion to multiple entries.

A large part of this move? Ricky Stenhouse Jr.’s struggles. Stenhouse, the 2013 Rookie of the Year and a two-time Xfinity Series champion, has an average finish of 20.9 this year, a whopping 7.4 spots back of teammate Ryan Newman.

Since crew chief Brian Pattie led Stenhouse to a multi-win season in 2017, the No. 17 has steadily declined in performance. Last year, Stenhouse only had three top fives and five top 10s, decreasing to a single top five in 2019 and a mere pair of top 10s.

That is not what Roush expects out of a driver who’s been racing in the sport’s premier series for several years.

“We determined it just kind of ran its course and it was probably time to make a change,” Newmark said.

And Newmark nailed it on the head. It doesn’t help that Roush went through dozens of changes, with Stenhouse being the only thing stable about the program for the last half-dozen years. To top it off, it did him no favors by keeping Pattie on board, even though he’s struggled outside of the superspeedways.

Newman, however, has been proving that the Ford team can once again run well. And if anyone can get solid finishes out of mediocre equipment like Newman does, it’s Buescher.

Buescher is three spots ahead of Stenhouse in the standings in a car that doesn’t have nearly the funding or resources like Roush does. In Roush equipment, which is now proven to be capable of competing in the top 10 once again, there’s no reason Buescher can’t make the playoffs in 2020.

While it’s a shame that Stenhouse is out of a job, it was time for Roush to try something new. Plenty of people knew Buescher, as well as Tyler Reddick, were discussing the potential to join Roush in 2020. However, with Stenhouse’s sponsorship lineup seemingly set for the next few years, it was assumed they would restart a third car.

But that’s not what happened. Reddick won’t be joining Roush. Instead, Stenhouse is being kicked to the curb and is preparing his resume for potential suitors.

Now Buescher enters a rather pleasant situation, knowing Ford will continue to back him and give him a shot to finally compete for wins in NASCAR’s top division.

I want to read Ricky’s Cup resume if anyone can find it. Do Stenhouse sponsors stay with Roush and if so, Ricky and his resume are in big trouble. Trying to figure out which team has lots of sponsors willing to toss money into an extra twenty cars a year with no results or TV time to show for it.

wrecks get you on tv breifly

Ricky and Jack. Oh, the guy has torn up race cars and yet Jack in all that time if he was really interested read $$$$$$ might have a really good driver. Ricky is not a good driver. What is Jack thinking with Ricky..he must be cheap. IMO. The whole thing with these two have been weird. My God, Jack was cussing him in the kiddie series, if memory serves. Does he even care anymore? Cannot blame him if he doesn’t. Ricky should have been gone long ago. MO

I was told you won’t get rich (salary) driving for Richard Petty and Jack Roush. I understand, they didn’t get a big salary when they drove their cars.

Maybe we need to hold off on the Roush parade. The 6 car barely squeezed into the Chase by a few points.