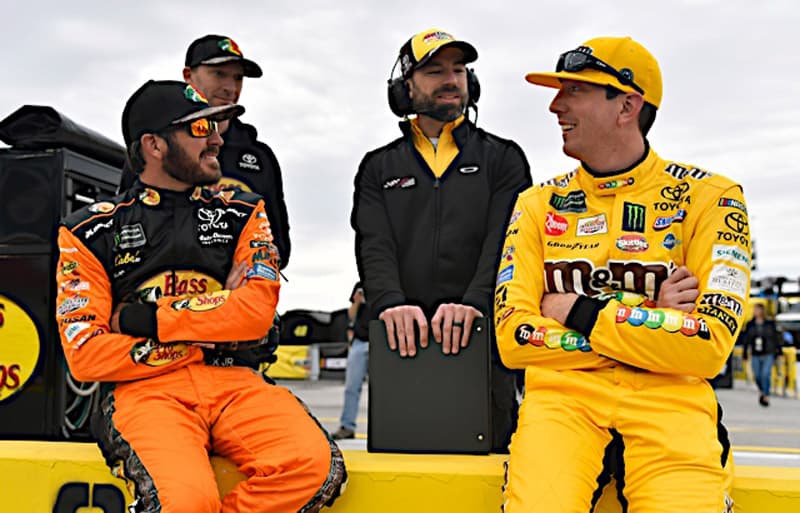 Last Saturday night (Sept. 21), Joe Gibbs Racing finished Richmond Raceway in positions one through four in the Monster Energy NASCAR Cup Series. Yes, Erik Jones was disqualified after, but still, what everyone saw was one team completely stink up the show.

No offense to Coach Joe Gibbs or any of his drivers, but no fan wants to see that. No one tuned in or bought a ticket to watch four cars from the same stable literally run laps around their competition — they watched because they wanted to see a good race, and they did not get that at Richmond.

And this isn’t an anti-Gibbs, anti-Toyota sentiment. Many had the same feelings last fall at Talladega Superspeedway when Stewart-Haas Racing ran first through fourth for most of the race. Many also had the same feeling toward Roush Fenway Racing when its cars took the top four spots in a 2005 race at Homestead-Miami Speedway.

But when Roush was taking over NASCAR in the 2000s, a rule was set in place to bump the team down from five cars to four cars.

Now, it is time to further reduce the amount of cars one organization can field.

I know NASCAR already struggles with getting enough entries without cutting out a car from each of the mega-teams, but this would only be a temporary problem. As the mega-teams are reduced to three cars, then eventually two, more owners will be encouraged to enter the sport. Isn’t that what NASCAR needs more than anything — a new batch of owners?

The only way to really be competitive in NASCAR right now is to have a multi-car team or be aligned with one. Well, the alliances are expensive and undependable, and immediately entering the series with three or four cars is an overwhelming thought. If all of the top teams only fielded two cars, then potential owners could feel they had a better chance. They could then come in with a single entry before expanding to two and thriving.

Hendrick Motorsports started with one car and five employees and won just its eighth race. That feat would be near-impossible in today’s NASCAR, and an owner like Rick Hendrick would be scared of ever starting a team when looking at his competition and seeing that they have 600 employees, a fleet of cars and tons of information sharing.

Bill France Sr. would roll in his grave if he saw all these three- and four-car teams. According to Bud Moore in an interview he did on the Scene Vault Podcast, France never wanted teams to be bigger than two cars. The emergence of teams like that quickly occurred right around his death and drove out longtime teams such as Bud Moore Engineering’s single-car effort.

There was one mega-team that formed in the senior France’s era of rule — one formed by millionaire Carl Kiekhaefer, who entered the Cup Series in 1955. With the budget to spend way more than his competitors, Kiekhaefer’s two-car, but later three-car, team easily won the championship with Tim Flock and won 22 of the 45 races that season.

The following season, Kiekhaefer expanded even more, fielding three to four cars at most races and six cars at Daytona Beach. In his second campaign, Kiekhaefer won 30 of the 56 races, finishing 1-2-3 on several occasions. The result of the dominance was field sizes dropped from around 30 cars at the start of the season to 20 near season’s end, and many more team owners allegedly threatened to quit as well. According to NASCAR historian Greg Fielden, the fans booed and threw beer bottles at the dominant Kiekhaefer Chryslers, and France and crew tried several times to find something wrong with the cars but failed.

The only hitch in Kiekhaefer’s dynasty was the team’s inner turmoil. Flock quit the team after winning North Wilkesboro Speedway, just the 10th race of the year. Herb Thomas left just past the midway point in the year despite winning three straight races for Kiekhaefer. Thomas then started fielding his own car, and while he didn’t win any more races, he was beating Kiekhaefer’s other two full-time drivers, Buck Baker and Speedy Thompson, in points.

Kiekhaefer was so desperate to beat his former driver that he purchased a track in Shelby, N.C., and paid the sanctioning fees for NASCAR to add a race there near the season’s end. (I wish we could go back to it being that easy to add a new track to the schedule.) Baker won that race, but the real storyline was that Thompson made contact with Thomas, sending him into the wall and causing injuries that essentially ended the two-time champion’s career. There’s been much speculation as to whether Kiekhaefer ordered Thompson to wreck Thomas or if it was intentional at all. But regardless, with Thomas out for the final three races, Baker easily won the mega-team its second championship in as many years.

According to Moore, France essentially told Kiekhaefer at the end of the season, “You’ve got your trophy now, don’t come back.” And Kiekhaefer’s Chryslers were never seen at the track again.

I tell all this as a cautionary tale because history has a tendency to repeat itself if not retold. With these multi-car teams, we’ve already gotten to a NASCAR that the founder himself would not like. And we’ve already seen as recently as 2013 how team orders can affect a championship battle. And as I mentioned, fans didn’t like seeing dominant mega-teams anymore in the 1950s than they do today.

So far in 2019, only five organizations have won, with JGR winning 15 of the 28 races. First off, we should all be alarmed at how closely those JGR numbers resemble Kiekhaefer’s. Secondly, wouldn’t having more competitive teams make the racing more exciting?

If a three-car limit was introduced in a few years (NASCAR would have to give the teams a few years to adjust), it would cut Hendrick, SHR and Gibbs down an entry — so three cars would be lost. When trimmed to two cars, three more from those three teams, plus an entry from Team Penske, Front Row Motorsports and Rick Ware Racing would all be lost — nine total. But these moves would encourage many more owners and manufacturers out there to enter the fold, and those nine cars would quickly be replaced with many more to follow. Sometimes, it’s best to take a step back before taking two forward.

Here’s the part where the cynics come in with, “Well, then the big teams will just have alliances with other teams that will basically form one giant team.” But according to FOX Sports’ Bob Pockrass, the 2021 car rules will make technical alliances unnecessary due to the spec chassis and bodies those cars will have. So there has never been a better time in NASCAR to limit team sizes.

Just imagine 18 to 20 different race teams showing up each week with a car or two and a larger amount of the field having the capability to win. Obviously that’s the best case scenario, but even if reducing the car limit brought in a few new owners, wouldn’t that be a positive change? After all, Hendrick, Gibbs, Roger Penske and Jack Roush aren’t going to be around forever, and who knows what happens with their teams when those days come.

So, NASCAR executives, if you really want to reconnect NASCAR to its roots, do what its gardener, France, wanted, and limit teams to two cars. The series may just blossom again.