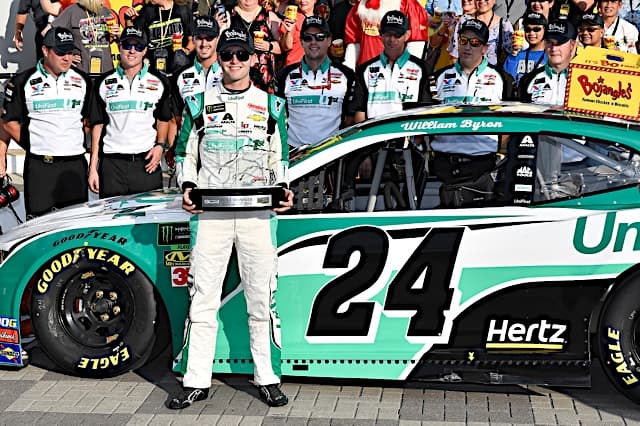 In just the second qualifying period ever at the Charlotte road course, William Byron won the pole for the Bank of America ROVAL 400 in the Monster Energy NASCAR Cup Series. Byron turned a fast lap of 103.198 mph on Friday (Sept 27) and will start on the front row for the third time on a road course this season.

Byron edged out his Hendrick Motorsports teammate Alex Bowman, who went 103.078 mph. Joey Logano’s 103.037 mph lap put him in third, while Jimmie Johnson was fourth with a 102.893 mph lap. Clint Bowyer, who qualified fifth, turned a lap of 102.838 mph after missing the backstretch chicane.

Fellow Stewart-Haas Racing cohort Kevin Harvick will start sixth, while Kyle Larson qualified seventh. Larson also missed the turn in the back straightaway chicane, but was able to make a second lap. Martin Truex Jr qualified the highest of the Joe Gibbs Racing drivers in eighth. Logano’s Team Penske teammate Ryan Blaney will start ninth with Paul Menard just behind him in 10th.

There was one incident in the first round of qualifying but didn’t require any stoppage time. Chase Elliott spun on the frontstretch chicane but didn’t incur any damage. He wound up completing a lap at speed and will start the race 19th.

The Bank of America ROVAL is set to get underway on Sunday, Sept 29 at 2:30 p.m. ET. Television coverage will be provided by NBC.