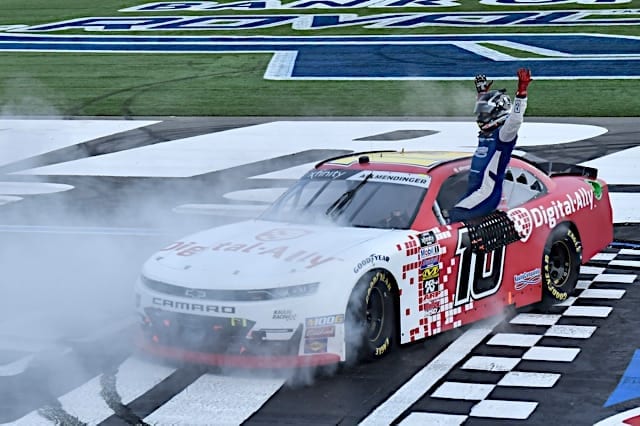 In his last scheduled start of 2019, AJ Allmendinger delivered what Kaulig Racing team owner Matt Kaulig hired him to do: win. Allmendinger aced some late restarts to win the 2019 Drive for the Cure 250 at the Charlotte ROVAL on Saturday afternoon (Sept. 28).

It is Allmendinger’s third career NASCAR Xfinity Series win, but his first driving for Kaulig.

“I can’t thank Matt Kaulig enough,” Allmendinger told NBCSN. “First of all, he put his belief in me. [He] wanted me to come here to try build this team. The last times at road courses, I’ve been gutted not getting my wins. I can’t thank all my race team enough.”

Allmendinger flawlessly executed the final restart to win by 2.386-seconds over Tyler Reddick. Although Allmendinger made it look easy, his hard work showed.

Reddick finished second, but he earned praise from the race winner. On the last couple of restarts, Allmendinger was comfortable with Reddick’s style of driving, so Allmendinger was able to maintain the lead and eventual win.

“Really got to thank Tyler Reddick. He’s phenomenal,” Allmendinger said. “He told me he needed my help on the road courses. He’s out-qualified me in every race then, beat me in a couple. I knew behind me I could be defensive on the right side and get myself an angle. Tyler wouldn’t shove it down in there; appreciate that.

“Just trying to change the restarts up, but you can only do so much. I knew once we got into clean air, we were good. In traffic, it was a struggle. Clean air was pretty bad**s.”

While Allmendinger celebrated in victory lane, the second race in the Round of 12 was quite adventurous for several of the playoff drivers.

Shortly after the third stage began on lap 45, a caution came out and four playoff drivers, including John Hunter Nemechek, were involved.

A wild start the the final stage at the Roval! pic.twitter.com/PuT0xy8tTp

As per NASCAR rules, Bell was obligated to serve a penalty. Bell instead chased Briscoe back down and ultimately spun him.

While Briscoe’s team fumed, NASCAR ruled Bell would restart at the tail end of the longest line.

Bell finished 12th, but it didn’t hurt his playoff run, as he already locked himself into the Round of 8 with his win in the series previous race. As for Briscoe, he finished ninth, but additionally collected 19 crucial stage points. As a result, Briscoe is 35 points above the cut line, a comfortable position after the ROVAL.

With one race left to go in the Round of 12, Nemechek, Brandon Jones, Ryan Sieg, and Justin Haley are all below the cut line.

Jones also was involved in the lap 45 incident and he finished 16th. Sieg dealt with fuel pressure issues early in the race, and he finished two laps down in 30th. As for Haley, he experienced mechanical issues and went to the garage for repairs. He came back on track to finish 31st, the lowest of all playoff drivers.

Loved to see AJ get a win!