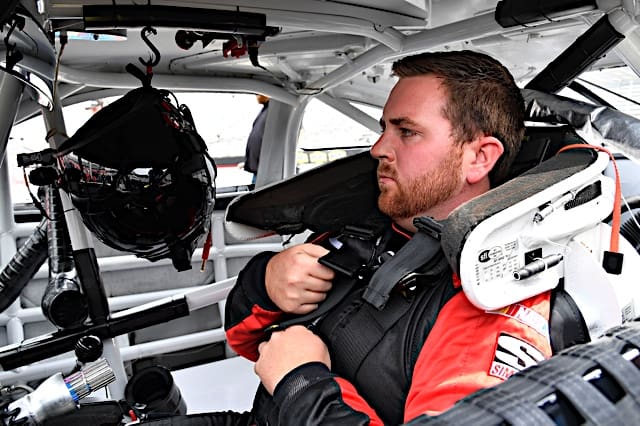 Blake Jones confirmed to Frontstretch on Saturday (Sept. 28) that he’ll return to the Monster Energy NASCAR Cup Series at Talladega Superspeedway in under two weeks. Jones will pilot the No. 77 Tennessee Shine Co. Chevrolet Camaro for Spire Motorsports.

“First of all, I’d like to thank God for all he does, not only for me but for all of us,” Jones told Frontstretch. “It’s an honor to drive for a team of this caliber — they for sure know how to win — and the opportunity to drive this race is totally amazing. Hopefully, we can live up to their expectations and have a good finish.”

Jones ran three MENCS races last season with BK Racing, including his debut at New Hampshire Motor Speedway. His most recent MENCS event was at Bristol Motor Speedway in August 2018 where he earned his career-best finish of 27th. Jones has one career victory at Talladega Superspeedway, coming in 2015 with Cunningham Motorsports in the ARCA Menards Series.

“Moonshine and NASCAR go hand in hand,” Jones explained. “Back when NASCAR first started, the moonshine guys were also the drivers. We have a saying that’s kinda stuck with us: distilling made it possible and that’s so true for me.”

The last time the No. 77 Spire Motorsports entry took to the high banks of a superspeedway, Justin Haley earned his first victory in the rain-shortened Coke Zero Sugar 400 at Daytona International Speedway. Under the Spire Motorsports banner, the current organization has made 28 starts in the MENCS. Jones will now join Jamie McMurray, Garrett Smithley, Reed Sorenson, Quin Houff, Haley and D.J. Kennington as drivers of the No. 77 entry. (McMurray ran the No. 40 at Daytona).