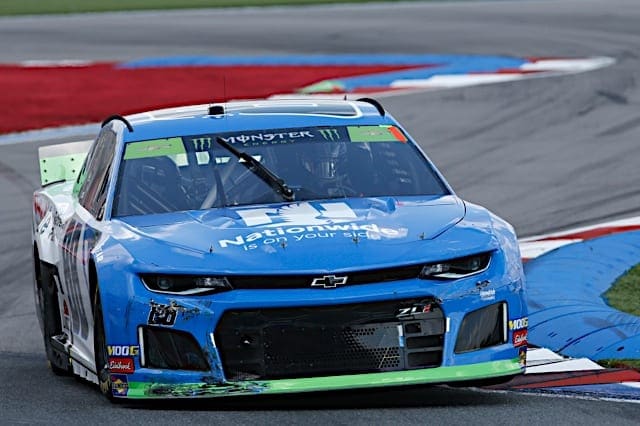 Alex Bowman came in to the race at the Charlotte Motor Speedway ROVAL with his eyes set on staying out of trouble and making it to the Round of 12.

Well, one out of two isn’t bad.

Even that nearly wasn’t enough, but the driver he was trailing in the points, Ryan Newman, missed the chicane on the backstretch with three laps to go. The mistake earned Newman a pass through penalty and Bowman a playoff berth into the next round.

It wasn’t the only drama that Bowman found himself tangled up in. The No. 88 Chevrolet got into the chicane too fast on the opening lap and spun. Then, he got into a mid-race scuffle with Bubba Wallace after the No. 43 driver apparently gave Bowman an obscene gesture. Bowman then hooked the right rear corner of Wallace’s car and spun him out coming out of the backstretch chicane.

After the race on pit road, Wallace approached Bowman, who was being treated for dehydration by medical personnel. Wallace threw the contents of his drink bottle in Bowman’s face and stormed off.

VIDEO: @KicknTheTires followed a very upset @BubbaWallace as he doused an overheated @AlexBowman88 w/ his drink after the @CLTMotorSpdwy #NASCAR #ROVAL race. pic.twitter.com/JCRl67sMrK

Afterward, Bowman was taken to the infield care center for dehydration. Upon his release from the care center, he talked about his up and down day.

“Yeah right there at the end of the race I was about done from a physical standpoint so I just tried to keep digging,” he said. “Obviously I tried to give it away on lap one. It started wheel hopping and kinda got away from me.

Asked if he was concerned about the feud becoming an issue in his playoff quest, dodged the answer.

“We just gotta focus on going forward and running well,” he explained. “Obviously, Dover, we finished second in the spring so our race car is gonna be really strong there and we just gotta go capitalize on that.”

Not only did Bowman finish second at Dover, but rather all three tracks that make up the Round of 12 (Dover, Talladega and Kansas).

Bubba is a classless guy, always has been. No xfinity wins, no cup wins, wonder how he even got here. Mmmmm

Bubba Wallace should be fined by Nascar for interfering with medical staff who were giving aid to a drive with troubling symptoms. If I were Richard Petty I would find a new driver with some class and having sportsmanship traits. The guy is an embarrassment to the sport.

I don’t care about what Buba did post-race, but here is my question: Given Buba’s average race results, should he worry more about driving and less about flipping people off?