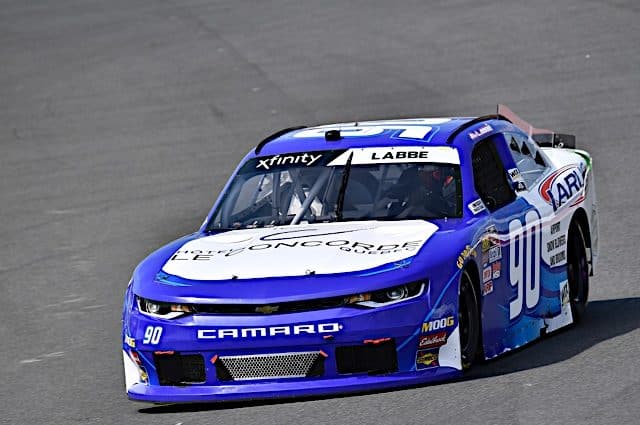 F1 Midweek: The Big Stories after the Russian Grand Prix

NASCAR Xfinity Series playoff contenders and road course ringer AJ Allmendinger may have dominated the headlines of Saturday afternoon’s (Sept. 28) race at Charlotte Motor Speedway’s ROVAL. But behind them, Canadian Alex Labbe laid a foundation for his future with a sixth-place finish.

It was the St. Albert, Quebec native’s career-best Xfinity result and just the second top 10 of his career. (Labbe’s previous best was a ninth last year at the Mid-Ohio Sports Car Course.) It was also the best finish ever for his race team, DGM Racing, beating a seventh from Andy Lally at Mid-Ohio in 2016.

The good finish was far from a fluke for the 2017 NASCAR Pinty’s Series champion. Labbe ran inside the top 10 all race. He qualified sixth, finished the first stage fourth and took seventh in stage two.

“Oh, what a day,” Labbe said. “We got stage points every stage … it’s great. I’m really proud of my DGM crew. We unloaded really good, made it better, made it better every stop.”

Despite the career-best performance, the racer in Labbe had his sights on finishing further up the running order.

“Really close to the top five there at the end, but really solid effort,” Labbe said. “We were definitely better on the long run. We would have rather it stayed caution-free there at the end. I think we had something for the [No.] 9 and [No.] 7 for sure. They were a little better than us for a couple laps, but on the longer run, I think we were right there and maybe a little better than them.”

Labbe raced full time last year for DGM and finished 17th in points with just the lone top 10 in his rookie season. This year, Labbe returned to the Pinty’s Series full time and is only racing a limited Xfinity schedule. The Charlotte ROVAL was just his eighth start of the season.

“It’s way different, but it’s fun,” Labbe said about running a part-time schedule. “Every time I come here with Mario [Gosselin] and these DGM guys, they always bring me the best car they can. They are always here to race and race hard. We proved it today.”

The performance on Saturday certainly helped Labbe in his bid to run more Xfinity races down the road.

“It’s big, it’s really big,” Labbe said. “I didn’t run a lot of races this year, and it started really rough. We were really good at Bristol [Motor Speedway] at the beginning of the year and we broke a gear. We crashed at Talladega [Superspeedway] earlier in the year, too, when we had a good run. But just to come here and execute a good day, like I was saying, to run in the top 10 all day, that proves a lot. For a small team like us, that’s awesome.”

Labbe said he didn’t know when his next race would be. Kansas Speedway in three weeks was a possibility as he continues his long-term association with Gosselin’s team.

Michael Massie is a writer for Frontstretch. Massie, a Richmond, Va. native, has been a NASCAR superfan since childhood, when he frequented races at Richmond International Raceway. Massie is a lover of short track racing and travels around to the ones in his region. Outside of motorsports, the Virginia Tech grad can be seen cheering on his beloved Hokies.
@m_massie22
Previous Blake Jones Set to Run Spire Motorsports Entry at Talladega
Next Xfinity Breakdown: Drive for the Cure 250