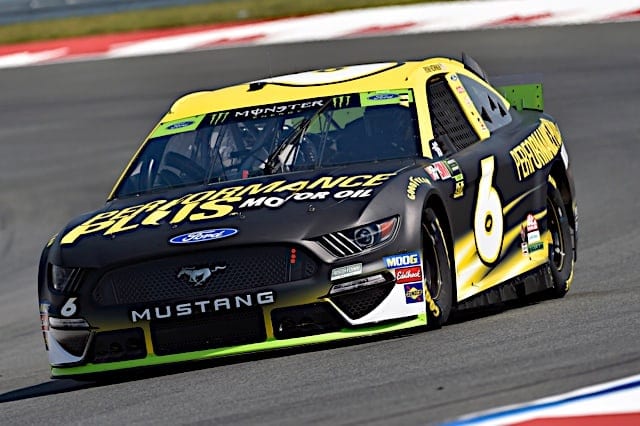 Ryan Newman, who put Roush Fenway Racing’s No. 6 Ford in the playoffs for the first time since 2006, came just shy of advancing to the Round of 12.

Newman finished 32nd in the Bank of America ROVAL 400 as the second-to-last car on the lead lap. But the scoring pylon doesn’t tell the whole tale of Newman’s race.

He came into Sunday with a slim 14-point advantage over Alex Bowman for the Round of 12 cutline but started the race in a hole when he qualified 24th. Newman then failed to get any stage points, pushing him back toward elimination. However, he was still set up late in the race to potentially get a top 10 and safely advance.

But on a round of green-flag pit stops around lap 76 of 109, Newman lost over a dozen spots with a slow stop. He worked desperately to get back in contention, spinning Matt Tifft in the process. Newman later got new life with a caution flag yet failed to take advantage of it when he stalled out on pit road.

“I let us down on pit road,” Newman said. “We had one bad pit stop — just lots of little things today. I feel like I made a lot of mistakes trying too hard.”

Still back in the pack, Newman took damage when Denny Hamlin spun right in front of him. Still, he and the No. 6 team powered on, working their way back up into the top 15.

Newman was running 14th in the closing laps and had a one-point buffer over Bowman for the last playoff spot. Bowman was in second place and ultimately finished there, so all Newman had to do was hold his ground — something he thrives at.

Aric Almirola, who was trying to gain ground to get into the Round of 12, hounded Newman in the closing laps. Newman was doing an excellent job of keeping the No. 10 behind him until he missed the backstretch chicane.

The penalty for that is a stop-and-go, but Newman didn’t serve it right away so he was further penalized with a pass-through. That officially killed his chances to advance.

The penalty dropped Newman from 14th to 32nd and dashed his playoff hopes.

“That was not the only mistake I made and I don’t know that was what actually took us out,” he explained. “But in the end, I’m just proud of the guys … We did not have the race car, and that’s what I had to do. I feel like we were in position at one point and just got to trying too hard to keep the [No.] 10 car behind us and missed the curbs. That was unfortunate.”

Even though Newman can no longer win a championship in 2019, he can still try to get up as high as fifth in points, which is now his goal.

“We came in at a big deficiency and finished one point out or whatever it was. But no matter what, we’re gonna still fight for fifth,” Newman said. “And I want to thank everyone at Roush Fenway for the fight and opportunity they’ve given me. We’re not done, we’re just out at this point.”

At his side after the race, Newman’s daughter stood, holding her father’s hand.

“It’s awesome to have her here. It feels special to me to have her come out and be a part of this,” Newman said. “It doesn’t make it all better, but it surely makes it better.”

RFR didn’t have any cars in the playoffs in 2018 and the No. 6 car only had two top 10s all of last year, so Newman’s playoff run was a step in the right direction for the team. The 40-year-old veteran refuted that the driver was 100 percent of the reason, though.

“No, I didn’t carry the team on my back. We worked together,” he said. “They carried me, I carried them at times. It’s a team effort. It was a team effort today that failed, but it’s still a team effort.

“And I’m just really proud of everybody’s hard work. We’re not done, we’re gonna keep digging. We got some stuff up our sleeves for later in this playoffs. We’ll do what we can to try to get to fifth.”

SUPPORT OUR JOURNALISM ON PATREON! EXCLUSIVE AUDIO FROM DENNY HAMLIN

Yeah right. He has a better chance of winning somewhere than finishing in 5th.

Stick a form in him. As he mentioned numerous times, he doesn’t care what anyone thinks.

Stick a fork in him, twice

The fact that Newman got the car into the playoff at all is a huge deal. He should be proud of bringing Roush back to semi respectability.