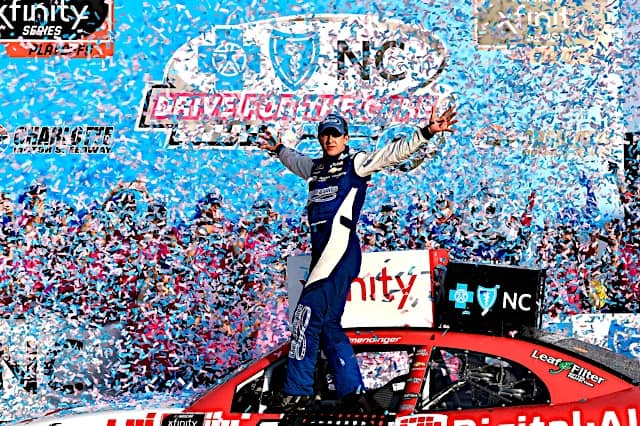 Can you say spoiler? The NASCAR Xfinity Series playoffs might have been front and center Saturday (Sept. 28) going into the Drive for the Cure 250 at Charlotte Motor Speedway’s ROVAL. But it was part-time driver AJ Allmendinger stealing the show and the win, a perfect way to cap off his limited schedule with Kaulig Racing.

Allmendinger stalked the leaders throughout the first two stages of the race, settling in behind Christopher Bell in the second segment. But while Bell had more power on sections of the big oval, Allmendinger had the prowess entering the twists and turns. On lap 47, he was able to use his bumper to get Bell loose, pushing his No. 10 car to the front of the pack.

From there, Allmendinger would not give up the lead again.

There are few true road course ringers in NASCAR these days. Full-time drivers have learned to adapt and there’s less need for teams to have a driver run just the road courses. Kaulig Racing has used Allmendinger well this year, though, easing a second car into the series on a part-time schedule with a proven driver. There have been a few hiccups, including a pair of disqualifications earlier this season. But the team is pleased with what they have learned from the veteran Allmendinger and he’s had an opportunity to race for victories. It’s been a win-win situation all along, a quality decision they affirmed with Saturday’s trophy.

It was also a good situation for the sport as well. The playoffs get so much coverage in the fall that there needs to be something else to talk about. The championship is important, but so are individual races and drivers like Allmendinger who compete for nothing more than the win.

Is there really any doubt Christopher Bell is ready for the jump he’ll be making to the Monster Energy NASCAR Cup Series next year? Bell ran an outstanding race, leading twice for a total of 19 laps and making a difficult road course look easy. He took being bumped for the lead by Allmendinger well — it would have been easy to make a wild retaliatory move.

Bell also handled being forced out of the frontstretch chicane the right way based on what drivers were told in the drivers’ meeting about the result of an incident. He let NASCAR make the call and then drove back to a 12th-place finish after his contact with Chase Briscoe. There was no meltdown, no loss of focus. Bell has a bright future in the Cup Series with Leavine Family Racing.

Justin Haley rolled onto pit road under caution on lap 4, but it was no routine stop for Kaulig Racing’s primary car.  A broken track bar mount sent the No. 11 to the garage for repairs; it cost them six laps they’d never make up.

Haley entered the race 20 points below the cutoff to make the second round, and his 31st-place finish this week forces him into a corner at Dover International Speedway. A win is now his only viable option to move on.

Also suffering a potentially playoff-ending failure was Ryan Sieg. Sieg went to the garage with a mechanical failure on lap 45, losing three laps for repairs in the process. He went on to finish 30th. Already an underdog, it looks as though this Cinderella’s playoff hopes will be over for 2019 barring a Dover miracle.

Racing at NASCAR’s top levels should be hard, there’s no question about that. But Charlotte’s trick road course is both hard and new, and it’s fair to say not everyone has the hang of the place yet.

It’s a bit unfair to call the race itself ugly, because it wasn’t. Racing the road course in the fall instead of the oval at Charlotte was one of the best decisions NASCAR has made recently. But there were plenty of ugly moments on Saturday.

Spins and chain reactions were commonplace, with nobody safe from contact or even themselves. A few years from now, drivers will have some experience at the course and teams will have copious notes to fall back on. But right now? There’s a learning curve, and it’s not pretty.

The bright side of this whole ordeal is NASCAR let things play out. Many times, a caution ended up not being necessary once drivers pulled away from their wreck.

There’s no doubt Alex Labbe is a talented racer. The 26-year-old Canadian is already a NASCAR Pinty’s Series champion. But this weekend, he scored a career-best sixth-place finish in the Xfinity Series running the No. 90 of DGM Racing. It’s also the best finish ever for Mario Gosselin’s team in its four years racing in the series. That’s quite an accomplishment for a part-time driver and a small team in their eighth race of the year together.

“He’s a dumbass.” –Cole Custer after contact from the No. 1 of Michael Annett
“He’s Captain Dumbass.” –No. 00 spotter

“It was a racing deal.  I feel like we were both trying to win the race, and there’s nothing wrong with that. I felt like I got turned down here, and that’s what I don’t understand. We’re both racing for the win and I felt I was doing everything I could. I had no reason to move him off the racetrack or anything. Like I said, I haven’t seen it, so it’s hard to say, but I wasn’t worried about his penalty. At the end of the day, I’m trying to do what I can do for the [No.] 98 car and I’m not too worried about those guys.” –Briscoe on contact with Bell in the frontstretch chicane

“Christopher Bell is phenomenal. I love watching him race a car. It doesn’t matter what type of car. Whether it’s an Xfinity car or when he gets in the Cup Series or when he goes out to the midget races or sprint cars. I mean, the kid is phenomenal. We know what kind of superstar he already is and he’s going to be. When you put a superstar like that in one of the best cars or maybe the best car in the Xfinity Series right now, you know, we see what happens.” –Allmendinger on Bell

“We have been through a lot this year. And to have two trophies now, we couldn’t be more excited. We definitely have more plans with AJ. He can help us in many areas. We just signed him to all our road courses and some speedway races until he doesn’t want to do it anymore. All we ask for is a chance. You just want to be in a position to win at the end.” –Winning team owner Matt Kaulig

“Yeah, the right-rear shock’s gone. Totally missing, gone, just not there. I was probably the most aggressive on the curbs today.” –Austin Cindric on a late-race issue that left him nursing the car to a third-place finish

It was a chaotic, messy race, but that’s not how the story should be told. The ROVAL was also a challenging test of the drivers and an important addition to NASCAR’s playoffs. Road course racing is a skill, and while Charlotte is a hybrid rather than a traditional course, it’s a great addition to the series. It’s also a wise decision on NASCAR’s part not to make it an elimination race as it is for the more experienced Cup Series drivers.

Teams are still on the learning curve surrounding this event, and it showed. The drivers who managed their patience were the ones who wound up at the top of the scoreboard.

There’s also a nice points fight shaping up with one race left to go in this round. Heading into that first elimination, only Bell and Custer are ensured a spot in the Round of 8, with Bell winning last weekend at Richmond Raceway and Custer clinching his spot on points. As it stands now, John Hunter Nemechek, Brandon Jones, Sieg and Haley sit below the cutline heading to the Monster Mile.

Up Next: The Xfinity Series heads to Dover, Del., next week for the Use Your Melon Drive Sober 200 at Dover International Speedway. Bell is the defending race winner and won the spring 2019 race at Dover as well. The race airs on NBCSN at 3 p.m. ET.

Waited until today so see if the win would stand overnight. Glad to see Dinger get a win. I still don’t like the Roval, but after what Humpy Wheeler did to the speedway just over a decade ago, I guess I shouldn’t complain.

NA$CAR has to do something about throwing a full course yellow for a spin and losing 5 laps when the car pulls away right after the flag comes out.