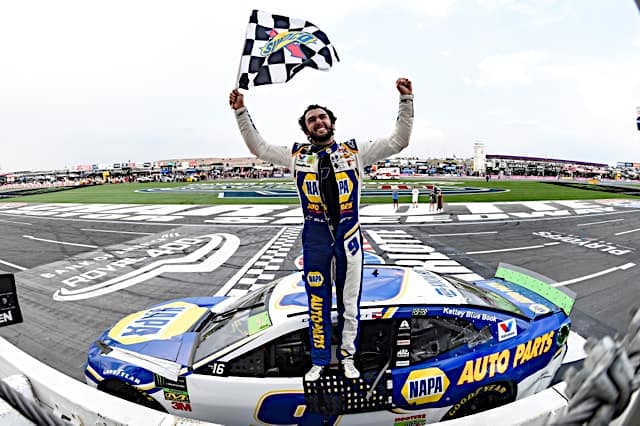 Chase Elliott is already NASCAR’s reigning Most Popular Driver. He’s won multiple races and was qualified for the Round of 12 in the Monster Energy NASCAR Cup Series no matter what went down in Sunday’s (Sept. 29) Bank of America ROVAL 400.

But what Elliott did at Charlotte Motor Speedway? And how he handled it? That created a signature moment which might resonate outside his growing NASCAR fan base and go viral.

Let’s set the stage. Elliott seemed to have the ROVAL mastered, winning stage two and sitting comfortably out front before a lap 63 caution for Daniel Hemric’s spin. On the restart, Elliott held the lead but then made a crucial mistake, taking too much speed into turn 1. His tires locked up, the No. 9 Chevrolet started skidding and the Hendrick Motorsports driver took himself straight into the tire barrier.

The leader goes into the wall! @chaseelliott can't make the first turn on the restart! #NASCARPlayoffs pic.twitter.com/YYKTPiRR8z

“Obviously, just a really stupid mistake,” Elliott said. “I mean, I’m not sure you could do something more stupid than that. If there ever is a notebook of things not to do, that should be number one in that book.”
With playoff advancement already assured, Elliott could have easily played it safe. But a closer look at the damage showed it was all cosmetic; the slow speeds entering turn 1 preserved the hood.
“Luckily, the splitter didn’t get knocked up, and that was the saving grace of the whole thing,” he said. “A lot of times, when you have damage like that, you can make it worse pushing and pulling on that stuff. Those are fragile areas. There’s really no support for the front fenders after it leaves the front bumper. It’s kind of its own piece of metal until it gets back to the A‑post. The guys did a nice job to put it together the right way.”
Once crew chief Alan Gustafson and company patched him all up, Elliott was a rocket ship. He darted through traffic, kept his nose clean and stayed the course through some late-race strategy that jumbled the field. With 15 laps remaining, Elliott had a top-five car again and it was clear he’d have a chance at passing Kevin Harvick. A handful of cautions later, he actually did it, blowing by on lap 103 and taking the most unlikely of victories.
But the worst was still yet to come for Elliott’s hood. The post-race celebration involved a return to that TUMS Heartburn corner, a turn 1 disaster turned delightful as Elliott revved his car right into the barrier.

It was breathtaking. It brought deafening cheers from the grandstands. And, for a sport desperately looking to reassert itself on the national landscape, it produced a millennial-like stream of GIFs and Twitter mania that made NASCAR look cool to those who might not have seen it.

“I felt like I had to go back and see it one more time,” Elliott said of his turn 1 celebration. “I’m typically not very quick‑witted, but I was really proud of that. I was pretty fired up.”

So was the crowd. And suddenly, so is a Hendrick Motorsports program that spent most of the year down a cylinder yet has three drivers launched into the second round of the playoffs: Elliott, William Byron and Alex Bowman.

Each of them had outstanding drives Sunday. But Elliott stands out. His third victory in the last five road course races is a series best; it’s also two more than Hall of Fame father Bill ever won. That track record’s another way in which Chase has established his own foundation upon which he’s building a tower of NASCAR success.

“Chase, he doesn’t give himself enough credit,” owner Rick Hendrick said. “I mean, he told me after the race he kind of made a big mistake. Man, you drove the wheels off the car and you won, you came back. That’s a tough ‑‑ I think that’s the toughest corner in it. [Turn 1.]”

But the wreck didn’t stop Elliott from reaching P1. And can you imagine if he takes this momentum and makes it all the way to the Championship 4 at Homestead-Miami Speedway? Elliott’s popularity would be ready to reach Dale Earnhardt Jr.-like levels.

It’s the type of jolt NASCAR so desperately needs to attract a bigger fan base. We’ll just have to see if the excitement sticks at the water coolers around the country this Monday morning. –Tom Bowles

Kaulig Racing hired veteran road course ace AJ Allmendinger for one thing, and one thing only: to win. That’s exactly what the ‘Dinger did in Saturday’s NASCAR Xfinity Series race (Sept. 28) at Charlotte Motor Speedway’s ROVAL.

From the drop of the green flag, the No. 10 team elected to short pit in both of the opening two stages. It was a bold move even though it meant Allmendinger scored no stage points. But who cares? ‘Dinger’s not running for a championship, making it easy to run a strategy that set him apart from the rest of the field. With the ROVAL marking the middle race of the Round of 12, playoff drivers were points racing, leaving this veteran in prime position to stay aggressive come the final stage.

Getting by Christopher Bell early in stage three allowed Allmendinger to manage his equipment and hold off the field on restarts. Meanwhile, it was Chase Briscoe who charged through the field not once, but twice en route to a ninth-place finish. Briscoe led a race-high 21 laps and appeared to be the biggest challenger to Allmendinger.

But Briscoe’s drive inside the top five fell apart after some contact with Bell. Forced to pit for fresh rubber, the No. 98 charged through the field in the waning laps to score his 22nd top-10 finish of the season.

Briscoe proved the victory last year at the track was no fluke; it just wasn’t enough to keep the 37-year-old Allmendinger from cashing in. It’s clear he and Kaulig have combined to build this second team into a true contender whenever it’s on the racetrack. The duo could be in for several more wins together if Allmendinger is retained once again for 2020.

The points race became another big story leaving CMS. Heading into the opening round cutoff race at Dover International Speedway next Saturday (Oct. 5), Bell and Cole Custer are locked into the next round. Austin Cindric and Tyler Reddick are near locks and will advance barring an unexpected catastrophe.

Justin Allgaier, ranked fifth, is 40 points to the good, with Briscoe +35 and Noah Gragson +26. Michael Annett sits on the bubble, 11 points ahead of ninth after a rough 15th-place effort on the ROVAL. Brandon Jones and John Hunter Nemechek go into the race tied for ninth, the only drivers in position to sneak back in. Ryan Sieg and Justin Haley are in a must-win scenario in order to advance. – Dustin Albino

What looked to be a promising weekend for the Scuderia turned into a disappointment. At the end of the first lap, their drivers had the first and second positions on lockdown. But by the race’s midpoint, Lewis Hamilton and Mercedes were firmly in control.

Sure, there’s not much you can do when a safety car falls the wrong way– that happens. At the same time, there’s really no excuse for what transpired between Sebastian Vettel and pole sitter Charles Leclerc in the opening stint.

Vettel apparently ignored team orders to give the lead back to Leclerc who, to make sure the Ferraris kept Hamilton behind them, gave the four-time World Champion a nice tow on the opening lap. But it’s hard to give back a spot when you’ve got a four-second lead on the car you’re supposed to make way for.

That meant Vettel, clearly the faster of the two, was kept out on track on worn tires in order to flip the teammates in the running order, all because of a promise made in a pre-race strategy meeting. It’s clear Ferrari got too cute with their strategy, and it very well could have cost them. Had they played the race as it unfolded, we might be talking about a fourth straight Ferrari victory.

Of course, it was all for naught, as Vettel retired with an MGU-K issue. That effectively dashed any hope for a victory for either driver. But for a team trying to engineer a specific finishing order, regardless of speed, it’s probably the result they deserved.

If Ferrari continues to operate like they did Sunday, they’ll have to do some serious grappling with which driver will be taking priority and what effects that will have on the team. One wrong decision could mean they end up with two unhappy drivers. – A.J. Hecht

This year, there was a different controversy, but not based around the race in Barcelona.  Back in July at Zandvoort, there was an issue with a data box that was not working in the Orange1 FFF Racing No. 563 Lamborghini shared by Marco Mapelli and Andrea Caldarelli in Blancpain GT World Challenge Europe.  The car was originally disqualified from qualifying, but the team appealed.  Prior to Sunday’s three-hour race, the SRO announced the team had won their appeal and got to keep their second-place finish from two months ago.  That meant Caldarelli and Mapelli got to keep the Blancpain GT World Challenge Europe title.

That gave the Orange 1 FFF Racing squad some momentum going into the season finale.  In the race itself, the No. 72 SMP Racing Ferrari that led the Blancpain GT Endurance Cup standings cut a tire early and dropped back.  Mapelli was able to get up to second and a safety car period put him right behind Stolz for the lead just before the race’s halfway point.

The restart from that caution was an interesting one with contact in the first chicane.

Despite the contact, all but forced off the track by Stolz, Mapelli was able to snatch the lead away.  From there, the team had to hold off the blue No. 4 Mercedes on a couple of late restarts in order to take victory with Caldarelli, Mapelli and last-minute sub Albert Costa.

There are only two major race weekends remaining for SRO-based series.  Blancpain GT World Challenge America and their support series (Pirelli GT4 America Sprint/SprintX/TC America) will be at Las Vegas Motor Speedway Oct. 19-20 for their season finale.  Then, the Intercontinental GT Challenge will make their first visit to Africa for the Kyalami 9 Hours on Nov. 23. – Phil Allaway