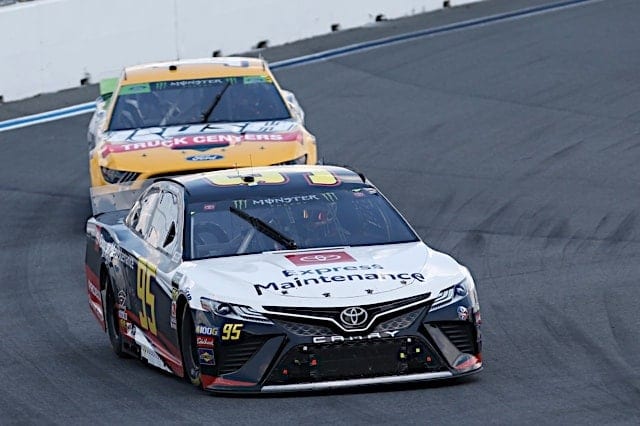 Indeed. While DiBenedetto may not have the road racing pedigree, he certainly has had the results on the twisty tracks this year. A fourth at Sonoma, sixth at Watkins Glen, and 11th this past weekend has demonstrated a seemingly sudden aptitude for turning both directions.

DiBenedetto was quick to credit his team for giving him a capable car but there’s no doubt he has the whole “left-right” thing figured out.

4th, 6th, and 11th on the three road courses this year. My team knows how to give me a good car for the rights and lefts!
?: NKP pic.twitter.com/EBKW6nwVdK

Behind DiBenedetto, a few other underdog drivers had noteworthy days. Michael McDowell ran in the top 10 for much of the second half of the race before slipping to 12th at the end — coming just two days after passing kidney stones. Additionally, Ty Dillon came home in the 16th, while Chris Buescher wound up 18th at the finish, despite being involved in two separate incidents, including a spin in the closing laps.

The Xfinity Series hit the ROVAL on Saturday with Canadian road racing standout Alex Labbe taking best in the underdog class with his sixth-place finish. It was Labbe’s and DGM Racing’s best career finish.

Also, with solid afternoons were Jeremy Clements in 11th and Lawson Aschenbach, who finished 14th in his JD Motorsports entry.

Knowing what we do about how the next few years of his career unfolded, it’s easy to forget that Brad Keselowski was once an underdog driver moonlighting on a team that was a picture of futility for decades. But before he won over 30 Cup races and a series championship, he helped longtime owner James Finch shock the racing world.

Finch has always done things his own way. He started a race team in 1989 with a young driver named Jeff Purvis. They ran one ARCA race that year and in 1990, Finch began many years of dabbling in both the Busch (Xfinity) and Cup Series’. He never really committed to either, only running a full schedule with a single driver twice (Randy Lajoie in 1999 and 2000). But entering the 2009 season, Finch had fielded a car in nearly 200 Cup races with a best finish of third in the 2002 Daytona 500 with former winner Geoffrey Bodine.

Meanwhile, Keselowski was an up and coming star with JR Motorsports in the Xfinity Series. Keselowski would run a partial schedule in 2009, splitting time between an extra Hendrick Motorsports entry and Finch’s No. 09 Chevrolet. His first race in the Finch car would be the April 26th race at Talladega.

The rules package at Daytona and Talladega in 2009 required the cars to perform what would become known as tandem drafting. Two cars, running with the trailing car tucked directly up against the bumper of the lead car would be faster than even the large packs that had become the norm at these speedways. Following a restart late in the event, Keselowski got hooked up with Carl Edwards, as the No. 99 car stole the lead away from Ryan Newman coming to the white flag. With Keselowski tucked up under Edwards’ Roush Fenway Ford, the duo pulled away off turn 4 and it was assumed the young driver would follow Edwards across the finish line.

But Keselowski had other ideas. He veered slightly right as if he was planning to move to the high side. When Edwards drifted high to block, Keselowski dove low. He had enough momentum to get his nose alongside the No. 99, and when Edwards tried to block that move, it sent him backwards. As the airborne car shredded against the catch fence, Keselowski rocketed to the first Cup win for both himself and owner James Finch.

There’s no mystery as to what became of Keselowski in the 10 years since that day. He still challenges for wins on a regular basis and has gone on to claim four more wins at the 2.66-mile trioval. Edwards abruptly hung up his driving gloves after the 2016 season. As for Finch, he ended his Cup team after 2013, having never returned to victory lane. But for one April Sunday in Alabama, Finch and his homegrown team ruled the NASCAR roost.

Left it all out there! P14 ?
Got spun with 20 laps or so to go and had to dig deep for this finish ?
Felt good to put a complete race together for JD Motorsports ??
Thank you to the team and my buddy Justin Marks for making this happen ??
Until the next one ?
.
.#nascar #xf… pic.twitter.com/BVEcywTX7Z

Thanks everyone for the kind words, so proud of everyone @dgm_racing_ we kept fighting, scored stage points and had a solid P6 finish yesterday! It definitely was a team effort, we knew we had to have a smooth day to have a top 10 and everyone stepped up to make it happen. ??? pic.twitter.com/cvmsX2jNoT

Funny story: At driver intros. I was giving the dignitaries the pound ?, when I came up to @MarioAndretti & could only say “You’re a legend, thanks for being here” and then moved to @TonyStewart who said something to the effect of “You’re welcome” haha. Had me laughing 2 the car

P11 today…good handling racecar for sure! Just battled a little track position but overall solid day and a crazy race! Love road course racing…I wanna go back and watch the all the craziness on tv ?