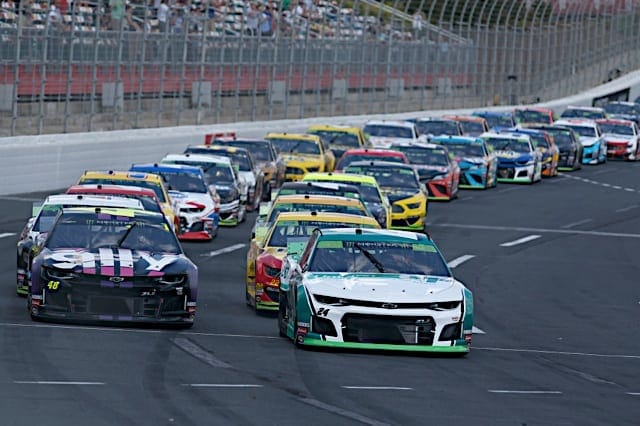 Two years ago, when Charlotte Motor Speedway announced that its fall race would be held on something called a “ROVAL,” the decision was met with a fair amount of skepticism.  Would big, bulky stock cars put on a good show at an infield road course?  And was it really a good idea to have such a race be a Monster Energy NASCAR Cup Series cutoff event?

The answer to both these questions is a resounding yes.  The 2018 ROVAL race featured plenty of memorable moments and a spectacular finish.  Sunday’s race (Sept. 29), the second event on the ROVAL layout, was another highly-entertaining contest.  How crazy was it?  Chase Elliott drove straight in the wall while leading, fought his way back to the front of the field, and won the race by passing Kevin Harvick in the closing laps.  That was just one story from a race that served as a tough test for NASCAR’s finest drivers.

Just behind Elliott at the finish was teammate Alex Bowman.  Bowman had qualified on the outside pole earlier in the weekend, but had to start from the rear of the field in a backup car after damaging his primary car in practice.  Beginning the race two points below the playoff cutline, Bowman spun out in the backstretch chicane on lap 1.  Later, he received damage in one of the first turn stack-ups.  The No. 88 team missed out on stage points entirely, putting Bowman in an even deeper hole.  But in the final, six-lap green-flag run, Bowman charged inside the top five. This late surge in speed gave him a fighting chance to collect enough points to advance.

Bowman still needed a little bit of luck, and he got it in the form of a mistake by Ryan Newman.  At the beginning of the playoffs, Newman looked like the unlikeliest of championship contenders.  Yet after the first two races of the postseason, the No. 6 team was 14 points above the cutoff and in position to advance.  It was surprising to see Newman with a points gap that large, but in a playoff system that favors drivers who avoid mistakes, Newman was able to play the game to his advantage.

VELAT: BOWMAN THANKFUL FOR LATE SURGE INTO ROUND OF 12

Sunday was a different story.  Things started off OK, with Newman earning six stage points and protecting his points cushion most of the afternoon.  But late in the race, the previously unflappable Newman made some critical errors.  The first was stalling his car on pit road during his last pit stop, putting him back in traffic. Then, blowing the backstretch chicane with three laps to go proved far more costly.  Per NASCAR’s rules, the penalty for missing any of the chicanes required the driver to stop in the restart zone on the frontstretch.  Newman was only one point ahead of Bowman at the time and desperately trying to hold off Aric Almirola, so the penalty effectively eliminated him from the playoffs.

Bowman and Newman were far from the only drivers keeping an eye on their points situations.  Ryan Blaney looked finished by a parts failure on the No. 12 car, but some quick repairs and good strategy by his crew enabled him to race back inside the top 10.  Despite being below the cutoff line late in the race, Blaney will advance.  Also moving on is Clint Bowyer, who came to the ROVAL four points below the cutline.  As one of the few playoff drivers who enjoyed a smooth race, 16 stage points and a fourth-place finish was a job well done for Bowyer.

On the other side of the fence with Newman were Almirola, Kurt Busch and Erik Jones.  Busch and the No. 1 team had a run of bad races at the wrong time while Jones’ playoff misery continued for another week.  Almirola was the only one of the three who looked capable of advancing, but poor tire strategy late in the race doomed the No. 10 team.  Once Almirola was finally able to pit for fresh tires late in the race, there were too few green flag laps left for him to gain the points he needed.

Indeed, the number of laps run under caution during Sunday’s race was the one blemish on an otherwise fun afternoon.  Nobody seems to know what kind of incident should warrant a yellow flag at the ROVAL, confusion that includes NASCAR officials up in race control.  It was puzzling how spinouts by drivers like Ryan Preece, Ricky Stenhouse Jr. and Daniel Suarez drew caution flags even though all three drivers spun away from the racing groove.  Yet when Matt Tifft looped around and threw up a huge cloud of smoke right in the middle of the racetrack, or when Suarez pounded the wall in the closing laps, the race stayed green.

Perhaps NASCAR didn’t want Suarez’s final crash to end the race. However, much less serious incidents caused race control to bring out the yellow all day long.  At a venue like the ROVAL, where caution laps can be long and tedious, it is not beneficial for NASCAR to be trigger happy with the yellow flag.  Hopefully, race control will be more consistent with what causes a caution in future ROVAL races.

Fortunately, NASCAR’s questionable officiating also did not ruin the race.  Even without considering the playoff battle, the ROVAL has become one of the most unique challenges in NASCAR.  Just like Darlington Raceway or Bristol Motor Speedway, Charlotte’s ROVAL configuration creates demanding conditions for drivers.  This track is one where even the best stock car racers in the world can make mistakes, and that’s a good thing.  There have too many races this year (including last week at Richmond Raceway) where drivers just seemed to be out for a cruise.  Blame it on reduced horsepower, blame it on the aero package, blame it on whomever or whatever you want. But it was a little weird to see such a tame event at one of NASCAR’s signature short tracks last weekend.

That’s why this race was the perfect remedy. Through its first two years, the ROVAL has been anything but tame.  Sunday’s race had chaotic scrambles for position, high stakes strategy plays, impressive comebacks, desperate drivers, flaring tempers, hurt feelings and a fun fight to the finish that tested man and machine.

In short, fans can be assured this race pushed the competitors to their absolute limit and the layout is challenging the drivers in a unique way.  Considering that nobody knew if the ROVAL would even be viable two years ago, Charlotte’s bold experiment is exceeding expectations.