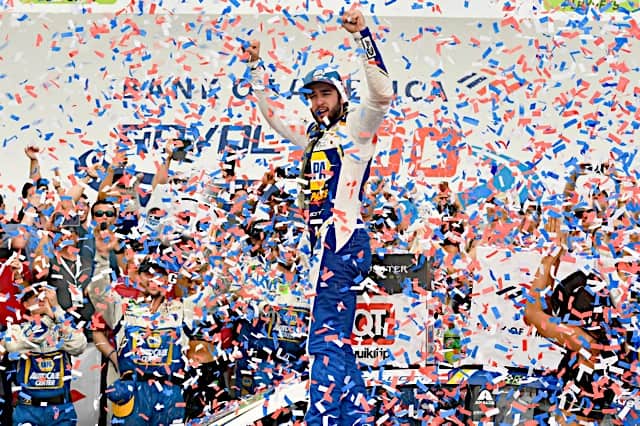 The Charlotte ROVAL did its best to resemble The Lady in Black during the race weekend. Ten caution flags flew during the Bank of America ROVAL 400. But when the checkered flag flew, Chase Elliott was victorious and four drivers saw their championship hopes end as the Round of 16 concluded. Bubba Wallace and Alex Bowman left mad at each other, but who left hot and who did not?

Martin Truex Jr. finished the three races in the Round of 16 with two victories and a seventh-place finish, respectively. He may have been in contention for a top five finish, or at least earned more stage points, if not for a blown engine during final practice on Saturday. As a result of the misfortune, Truex began the race at the rear of the field. To make matters worse, on the first lap of the race, he missed the backstretch chicane to avoid a spin and served a stop-and-go penalty. Truex recovered to finish seventh in the second stage, and maintained that position for the rest of the race, battling for the lead late.

After the reseeding of the point standings, the No. 19 team ranks second, but Truex is the hottest driver in the Cup Series right now.

Sure, Kyle Busch has four wins and now sits first in the championship standings, but he has not won since at Pocono Raceway in June, and he didn’t finish the Bank of America ROVAL 400. Busch has been unable to seal the deal lately, including his second-place finish at Richmond Raceway last week. To make matters worse, Busch opted not to continue racing at the Charlotte ROVAL after his involvement in an incident. Although he and his No. 18 team team didn’t need to continue racing, finishing with a DNF conceivably could be argued as a sign of defeat. For a championship contender, an admission of defeat is never a good sign.

Because of the damage from the incident n turn 1 n the flat tire, we had a broken sway bar. Our race was over b4 the red flag came out. We decided to not risk tearing up our car anymore. Others had more on the line. Better to call it a day n move on to Dover for the round of 12??

Because of a few instances, Alex Bowman couldn’t afford to give up. He wheel-hopped into the backstretch chicane on lap 1. Despite pitting, NASCAR ruled he needed to serve a pass-through penalty for missing said chicane. While the ruling was questionable, it put Bowman into a tough spot.

Furthermore, he spun Bubba Wallace after the two raced hard and Bowman disliked receiving the finger. Bowman didn’t earn any stage points in the two stages, and at various times was approximately 20 points below the cutline. Yet the No. 88 Chevrolet drove back through the field to finish in second place, grabbing the last Round of 12 berth.

As a dehydrated Bowman sat on pit road, Wallace angrily splashed him with fluid. As unclassy as the gesture was, Bowman’s championship hopes survived. Now, with the points reset, he is ninth in the championship standings.

Erik Jones was put in Hail Mary mode after his disqualification and subsequent last place finish at Richmond Raceway. He, again, was beset by bad luck at the Charlotte ROVAL. The No. 20 was caught up in the lap 24 wreck in heartburn turn, and it punctured a hole in his radiator. Due to the damage, Jones had to go behind the wall, ending his hopes of advancing to the Round of 12.

Team owner Joe Gibbs lamented the early playoff exit as a result of bad luck, but nevertheless, Jones has been eliminated from the playoffs due to two consecutive last place finishes. Jones is on an ice cold streak.

Between Bowman and Elliott, Hendrick Motorsports drivers passed the most cars at the ROVAL. Elliott led the most laps (35) in spite of missing heartburn turn on lap 66 while leading. He won the second stage and the race, collecting six valuable playoff points.The No. 9 team has asserted itself as one of the teams to beat on road courses.

Consider this: in three road course races this season, Elliott led laps at each race, won two of them, and his worst qualifying effort was at the Charlotte ROVAL (19th). He could have contended for the win at Sonoma Raceway, finishing first and third in the first two respective stages, but a blown engine ended his race prematurely. Elliott admitted he made a stupid mistake at the ROVAL, but he wholeheartedly made up for it, driving through the field and winning by 3.024-seconds. Elliott left with plenty of momentum as the Round of 12 begins.

Kurt Busch started 23rd and finished 20th. He never raced inside the top 10, and failed to advance to the Round of 12. The No. 1 team won at Kentucky Speedway in mid-July, but Busch’s hopes of winning the championship are over.

While Busch has raced admirably in his first season at Chip Ganassi Racing, he failed to earn any top 10s in the Round of 16, and his cold spell eliminates him from the playoffs. Credit Busch for his positive outlook on his season as a whole, and his confidence he and his team can finish strong.

David Starr has struggled in his second season as the driver of the No. 52 Jimmy Means Racing Chevrolet. He has eight DNFs this season, the same amount he had last season. He only has four top-20 finishes through the opening 28 races. At the Charlotte ROVAL, he experienced a mechanical gremlin early in the NASCAR Xfinity Series race. His team repaired the issue, but Starr ultimately finished 34th, 39 laps down. Despite the disappointment, Starr drove an underrated paint scheme for a good cause.

Some more pictures from this weekend for y’all to take a look at on your Sunday! Check out Drown Out Cancer and https://t.co/er13pwTkHj to learn more about the incredible organization we had the honor to represent at @CLTMotorSpdwy pic.twitter.com/KOxH7rEVHu

Dover International Speedway has been especially kind to Elliott over the last four races. His average finish there is 5.0, best of all Cup Series drivers, and he has led the second-most laps and earned the second-most points. Who’s first in those categories? Kevin Harvick, who won the 2018 AAA 400 in May 2018.

As for the Xfinity Series, outside of the Big Three, Justin Allgaier has performed best here. He is winless this season, but a win at the Monster Mile would inject some optimism into his championship hopes.

The Drive Sober 200 will take place on Saturday, October 5 at 3 p.m. ET with TV coverage provided by NBC Sports Network. The race will eliminate four drivers from the Xfinity Series playoffs.

As for the Cup Series, the Drydene 400 is scheduled to begin at 2:30 p.m. ET on Sunday, October 6 with TV coverage provided by NBC Sports Network.