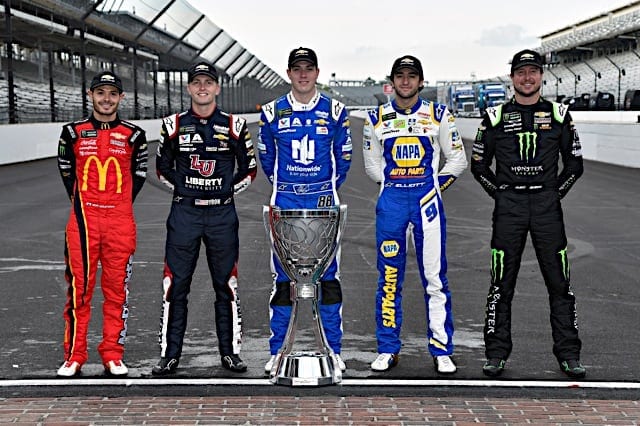 Chase Elliott’s comeback wasn’t the only big moment for the Bowtie Brigade Sunday (Sept. 29) at Charlotte Motor Speedway’s ROVAL in the Monster Energy NASCAR Cup Series. Two of its bubble drivers, William Byron and Alex Bowman, made it through after rollercoaster first-round performances. In Bowman’s case, he survived ugly contact with Bubba Wallace and a post-race water bottle attack.

Elliott’s win also came on the heels of AJ Allmendinger’s in the Xfinity Series, the first time Chevy pulled off a weekend sweep since Daytona International Speedway in July. (Did you have Ross Chastain and Justin Haley in the office pool for that Xfinity-Cup weekend? If so, you’re probably viewing this from that multi-million-dollar yacht you bought with the winnings.)

At one point, it looked like Hendrick Motorsports would struggle to get more than one driver in this year’s postseason field. Now it has three advancing, paired with Kyle Larson, to give Chevy four drivers in the Round of 12. That’s one more than Toyota (three cars from Joe Gibbs Racing) and just one behind Ford (three cars from Team Penske and two from Stewart-Haas Racing).

Can the good times keep rolling? The next round plays right into its hands, it seems. Elliott has a phenomenal Dover International Speedway track record and won the spring race at Talladega Superspeedway. Bowman was runner-up in all three events on the schedule earlier this season: Dover, Talladega and Kansas Speedway. Larson has been outstanding at Dover, too, and he ran top 10 at Kansas in May. And Byron, in his first postseason appearance, can get aggressive as he’s playing with house money.

Chevy’s late-season success has bled over into other series, too. Tyler Reddick remains a NXS title favorite with five victories, and Brett Moffitt leads the points for the Gander Outdoors Truck Series. So don’t write off the Bowtie Brigade just yet. Could you imagine it taking all three championships after a year where it’s averaged seven wins in Cup, Xfinity and Trucks?

TWO: As the Busch Brothers Crumble

Erik Jones can certainly make a case for biggest first round flameout (four points scored in three races after the DQ? That’s rough). But my money’s on the Busch brothers, both of whom stumbled through the playoff’s first round in what felt like a blast from their infamous past.

Kurt Busch suffered the worst of it, eliminated from the postseason in what was originally reportedly his last full-time year on the circuit. (All indications are that Busch will now return for 2020, although no contract has been signed with sponsor Monster Energy and Chip Ganassi Racing.) Kurt suffered the most from ill-timed contact at Las Vegas Motor Speedway with Martin Truex Jr., cutting his tire and crashing in a race where few drivers failed to finish.

“We ended up four wide, got a fender rub and the day is done,” Busch said after Vegas. “It just happens that fast.”

The team just seemed like it never recovered after that. Busch earned just one stage point the last two weeks and ran 18th and 20th, respectively. Early damage at the ROVAL left him noncompetitive despite having a successful history on road courses. What a fall from grace for a team some might argue was leading Chevy’s charge for the season’s first half as Hendrick struggled.

Kyle Busch, by comparison, remains the top seed entering the Round of 12. But the No. 18 Toyota team looks all out of sorts. Busch hit the wall at Vegas and was never competitive. He got his butt kicked by championship rival Martin Truex Jr. in a mano-a-mano battle at Richmond Raceway, arguably his best track. And then the ROVAL was an unmitigated disaster of contact, with tire issues and sway bar problems that relegated him to 37th.

It’s part of a longer-term slump where Busch, despite four victories this season, has been shut out since Pocono Raceway in June. More importantly, he seems aggrieved at everyone and everything, railing against lapped traffic in Vegas and showing disinterest on the radio at Charlotte.

Now, it would take a catastrophe for Busch to fall outside the Round of 8. His cushion starts at 41 points over ninth-place Bowman. But once the field shrinks even further? Right now, it would be just 18 over fifth place Kevin Harvick. It’s clear Busch’s four-year streak of Championship 4 appearances could be in serious jeopardy.

It felt like the concept of a road course ringer was dead in NASCAR. But along comes AJ Allmendinger to revive the concept after his fantastic limited Xfinity schedule in 2019 with Kaulig Racing. Allmendingr ran five times and ended the race top five in four of them (two of his races ended in DQs after the car failed post-race inspection). But the 37-year-old saved his best for last, jumping to the front and winning Saturday’s (Sept. 28) NXS race at the ROVAL.

Owner Matt Kaulig said in the midst of that post-race excitement Allmendinger had a lifetime contract to drive superspeedway races and road courses for the team. That may not be true, of course, but it would be silly for Kaulig not to bring Allmendinger back in 2020. He elevated a team that’s been middle-of-the-road in the Xfinity Series title hunt (regular driver Justin Haley is set to be eliminated) and put it in position to win.

Racing is a copycat business, and others might piggyback on this example. What about Bob Leavine, looking to start a second team for Toyota down the road? Hiring Allmendinger in Cup for a limited slate of races might be a great way to expand and get the organization ready. While the money isn’t the same for unchartered programs, there’s incentive to field them if owners feel they have a chance to win. Kaulig and Allmendinger restored the belief in one of NASCAR’s top three series you can do just that on a limited schedule.

FOUR: Kyle Larson for the Comeback?

This time one year ago, Larson was squeaking into the second round after a video game-like finish, rim-riding the outside wall with a damaged car to best Jimmie Johnson at the ROVAL by one point. But Larson had no such concerns in 2019, coasting to the next round and leading five laps en route to a ho-hum 13th place.

For a driver who seems to keep bad luck in the passenger seat, it’s a rare run of consistency. Larson has eight top-15 finishes in the last nine races, including three top fives, and has led laps in five of the last six Cup events. Now we head to Dover, a track where he’s led 378 laps and posted three top-five finishes in his last five times out.

Chip Ganassi Racing, fresh off Busch’s elimination, can also put 100% of its focus on Larson’s championship effort. Now, luck will still be needed (keyword: Talladega) for the No. 42 to push through. That’s never been its strong suit. But no one wants this guy at Homestead-Miami Speedway with a shot to win the title considering Larson’s track record there (322 laps led his last three starts). He’s the wild card to keep an eye on as the Round of 12 evolves into the Round of 8.

Ricky Stenhouse Jr. has been rumored as a candidate to replace the retiring David Ragan at Front Row Motorsports in 2020. And what a perfect transition that would be.

Take a closer look at the careers of both drivers. Ragan also lost his ride with Roush Fenway Racing, forced out at the end of the 2011 season after sponsor UPS bailed on the No. 6 program. Ragan had just one victory with RFR, at Daytona International Speedway, and zero playoff appearances. His best points finish was 13th back in 2007.

Stenhouse, meanwhile, has won just twice with RFR, both at superspeedway events (Daytona and Talladega). His best points finish was 13th after his lone playoff appearance in 2017. Stenhouse got seven years to prove himself with RFR; Ragan had five.

Here’s their career totals through the Charlotte ROVAL.

FRM has been searching hard for a perfect fit to its program, and Ragan served it well after joining from RFR, even winning a race with the team at Talladega in 2013. He left for a series of other opportunities here and there but always seemed most comfortable with FRM.

On paper, it feels like the 32-year-old Stenhouse would be the perfect fit to succeed him.