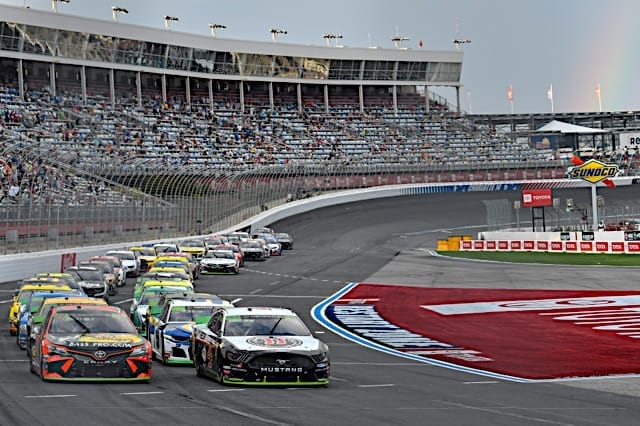 There was a lot of controversy surrounding the officiating during Sunday’s Monster Energy NASCAR Cup Series race at the ROVAL at Charlotte Motor Speedway. Cautions were thrown at untimely portions of the race, and some were frustrated with NASCAR as to why.

One rule that can help this argument is the utilization of local cautions.  Is it time, then, for NASCAR to use local cautions in road races? And should the experiment only exist in just the Cup Series or in all three major series?

Additionally, NASCAR announced on Tuesday that the 2020 package for the Cup Series will remain the same as it was in 2019. The series is awaiting a new car body in 2021, so some may view 2020 as a holding year just so we can get to one of the most anticipated years in the sport in a long time.

Even still, should NASCAR have changed anything for 2020, or is there no point in any body changes if the new car is coming up in 2021? There’s also the question of whether or not the package and overall racing improve in 2020, despite minimal changes to it.

Q: Is it time for NASCAR to throw local cautions instead of full course in road races? Daniel C., Salisbury, N.C.

A: That would probably be a good idea after the controversy race control caused on Sunday. The cautions were very inconsistent and some seemed like they were extremely unnecessary. Some came at crucial points in the race, and they hurt a few of the drivers in the process because of it.

Local yellows are used in every form of road racing, but when NASCAR comes to a road course, the sanctioning body keeps it to either a green flag or full-course yellow. It is now time to bring local cautions to the sport.

Road racing in NASCAR is always entertaining, but unfortunately, the way officials run a race affects how fans think of it. Jeff Gluck’s weekly race review poll on Twitter saw an 87% vote for “yes” in terms of whether or not the ROVAL was a good race. Some who voted no explained in the replies that it was because of officiating.

Local yellows would likely help fix that. They are in every road racing series, and it would help NASCAR if they implemented that rule, because officiating controversy would go away, at least in this aspect.

Next up, eliminate stages, but that is another conversation for another day.

Q: What do you think about NASCAR announcing 2020 will have the same package as this season? Good or bad move? Travis S., Andover, Mass.

A: Since a new car is coming out in 2021, no changes to next year’s car is a good move. Think about it for a minute: if you change a lot on the car and have teams spend a lot for only one season, many of them may not be happy about having to put in the effort to a car that is going to become extinct the next season.

NASCAR is making a good choice to keep everything the same. If the Gen-6 car remained for a few more years and the sanctioning body left everything alone, maybe one could question it. However, I do not; I understand leaving it alone. This season has really not been that bad, either.

Some may argue the racing this season has been sub-par at best — and to be fair, at times it has been. For the most part, though, things have been really good. The car may not be what some want, but we have seen some excellent races.

There are a lot of questions about how 2021 will go, but for the time being, leaving the car alone for 2020 is the smart move. Teams will have another year working with this package, and it could help the racing even more. As teams find more ways to work around the car, racing seems to improve to an extent.

NASCAR is in an important spot overall for the next year or two, and we will see 2020 be another good year for the sport — and certainly not a holding pattern before 2021’s changes. A changing schedule will help, and who knows what else is around the corner?

I was there Sunday. They had to manufacture the cautions to get the Golden Boy in position to win. Got old Bowman up to second. Rick Hendrick probably game a couple Corvettes to some NASCAR officials or family members. He plead guilty to bribery so who knows.
The last three cautions were unnecessary.
AS we progress through the playoffs, watch for someone getting caught speeding on pit road or eating something they shouldn’t so a penalty can be issued to advance the Golden Boy.
Final Four: Golden Boy, Kyle B; Denny H; Martin T. Toyota has some leverage so he may not win the whole thing.
Can’t manipulate the outcome with local cautions. Golden Boy would not have been able to catch up.

Are you implying that NA$CAR manipulates Brian’s events and money could be involved? Is there any evidence in the last 15 years that would lead you to that conclusion?

I think Harvick will be placed instead of Hamlin. Gotta be able to give the illusion of how equal and competitive everything is for the manufacturers. Can’t do that with one of the 3 left out at Homestead!

I have to wonder why you bother to watch? I’m under no illusions that NASCAR especially or any other sport really is completely legit. That said, I don’t keep watching and then get myself all twisted up looking for evidence of conspiracy in every flag waved or penalty given. When i was a little kid i loved pro wrestling. Then i found out it was fake. Then i stopped watching. I don’t believe the McMahons missed me.

They should have a like button thing on here. I’d give this comment about a thousand likes. Nascar never met a Hendrick car it didn’t like, or just about any GM car. Evidence? Seven faked up championships for Johnson and scads of incidents like the famous Dover pump up shocks. I had hoped Nascar was beyond that, but with the Golden Boy it would seem not.

This is a total no brainer. Of course they should use local yellows!

Not using local cautions at a road course is just plain stupid. I went to a Busch race in Montreal a few years ago on the F1 course. My seats faced the hairpin . There were about half a dozen spins in that corner and every time they called a full course yellow. The track is about 3 miles long. It was really stupid and ruined the flow of the race.