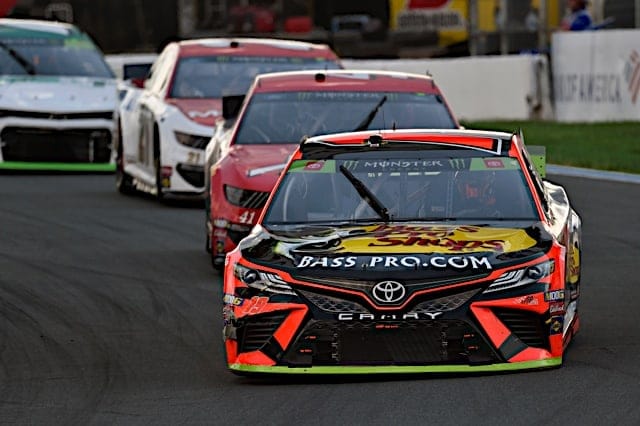 So, you stuff it in the wall and your day is over. Well, that is not quite how the script read for Georgia’s favorite son. Daunted by an embarassing mistake that put the No. 9 behind the eight ball, Chase Elliott rallied to win the Monster Energy NASCAR Cup Series’ Bank of America ROVAL 400 after meeting the tire barrier on lap 66.

After that impressive display of resilience, can Elliott conquer the Monster Mile this weekend for the second year in a row?

Like Elliott, Joey Logano also had an encounter with those tire barrier gremlins. However, his turned out worse, as Logano sustained a significant gouge to the left-front headlight decal.

With Logano’s struggles as of late, can he turn it around at the Dover International Speedway this weekend?

Speaking of turning around, water, fingers and a road course situated in the middle of a camper lot apparently do not bode well for Alex Bowman (and Bubba Wallace, for that matter). But hey, there is nothing to worry about. Right? He finished second, after all.

Quietly, Clint Bowyer has turned himself into one of the best road course competitors on the MENCS circuit, and it unsurprisingly showed at the Charlotte Motor Speedway ROVAL. The Kansas native took advantage of his road racing prowess to deliver a much-needed top five, good enough to advance him to the next round of the playoffs.

Questions continue to arise as the top competitors in NASCAR soldier on to Dover International Speedway. With drama, emotion and tempers still circulating, Dover might be a must-see event to open up the second round of the MENCS playoffs. With 12 drivers still in contention for the 2019 championship, our Frontstretch panel of experts were put to the ultimate challenge to determine the 12 best drivers in NASCAR today.

Truex tops our leaderboard once again. The hard-charging New Jersian finished in the respectable seventh position but will look to improve on the result this weekend at his home track.

Up and down day for us. We had a hell of a challenge starting in the back, but we just weren’t good enough at the end. On to Dover. We’re ready.@BassProShops #TeamToyota pic.twitter.com/JDViHRhnKZ

“When do I get to make my Final 4 picks? If this guy isn’t there, I’d be surprised.” -Trey Normile, Raw Gator

Harvick may have found a few turtles during the wild afternoon at Charlotte. Despite the encounter with the wildlife, his capitalization on Elliott’s controller dying and leading 34 laps, Harvick was unable to muster his Ford back to the lead in this final laps, ultimately landing in third.

Celebrate a great race by @KevinHarvick with a Bloomin’ Monday! Make a pitstop at Outback to receive a free Bloomin' Onion with purchase on Monday, September 30th! pic.twitter.com/MosZZesNY5

Like Harvick, Kyle Busch found many shelled creatures on his interesting journey around the ROVAL. Unfortunately, the turtles likely inflicted a casualty: Busch’s sway bar. However, the sway bar malfunction didn’t rain on the parade of most fans, who gladly exclaimed their emotion to Busch casual Sunday drive down pit road… the wrong direction.

Apparently, Elliott’s GPS thought the lap 66 restart was going to take the field on the normal oval layout. Instead, he found that there were some very cushy stacks of rubber blocking his way. So, what do you do? Just back up, recalculate the GPS and take an alternate route to your destination, which in Elliott’s case was victory lane. Also, we might just have a candidate for the best burnout of the year.

Remember when @ChaseElliott crashed on the restart?

Chase did, and he did a BURNOUT RIGHT THERE after coming back to WIN! #NASCARPlayoffs pic.twitter.com/OyCzd3aGkO

“I mean, seriously, how many of us haven’t had our Xbox One controller disconnect with us when racing on NASCAR Heat 4?” -Rob Tiongson, The Podium Finish

Well, Darrell Waltrip might be retired, but we almost had another case of…

“You picked a fine time to leave me loose wheel.”

Anyway, Keselowski may have broken the record for the world’s fastest shopping cart.

“The wheels on the car go round and round, mostly….” -Dan Greene, Frontstretch

Like Elliott, Logano’s GPS needed a bit of recalculating. Fortunately for Logano, though, the No. 22 carries the colors of a brand of motor oil, so it wouldn’t have been perfect product placement is his Ford got caught on those tires (a la Keselowski at Indy).

“If this were soccer, I’d give him an A+ for the dropkick on the tire barrier.” -Gillispie

Hamlin’s weekend got off to a rough start as he crashed into the tire barriers in first practice. However, Hamlin did not have to necessarily rebound, because the entire rest of the field likely encountered some sort of problem throughout the weekend, too. Hamlin will try to rebound at Dover, a track at which he is winless.

Denny Hamlin strolling out of the men’s room with toilet paper stuck to his shoe pic.twitter.com/Z6TRryzJeX

A big table at Applebees' with Bowman sitting at the head of it and everyone who hath scorned him sitting on either side in descending order of severity. #NASCAR

“At least he has Nationwide on his side.” -Gillispie

At least this go-round at the ROVAL didn’t involve Larson crashing into walls and tire barriers. However, Larson encountered plenty of rogue turtles. We might need to ask a biologist why there are so many turtles so far from home.

Let’s go! Eyeing the round of 12! pic.twitter.com/6pK8rfhCy3

For your random NASCAR trivia of the week:

Question: Who has the most poles so far in the 2019 season?

Allergies are brutal today and I had to take an antihistamine so if you ask me something and I just stare at you like this for the next 30 seconds before saying “What?” that would be why. #NASCAR pic.twitter.com/KiRO9T0lkI

“I like to call him the Atlanta Falcons of NASCAR. He gives us such hope for what is to come and then completely falls apart.” Jake Baskinger, Jake Baskinger on YouTube

On this week’s edition of Bowyer’s social media chronicles: Wolfgang, lead sled troubles and Cash in a carseat.

As good as our day was, I’m afraid the highlight of my day was meeting @MarioAndretti. Such a badass! Thanks for coming and leading the field for the pace laps. ?

“This time at Charlotte, Bowyer was throwing punches in a different way: on the track. You’re welcome, Ryan Newman.” -Gillispie

If you haven’t figured this out by now, we need to do something. This is an absolute travesty for all of biology. Please, SAVE THE TURTLES!

“When asked what he’ll do after a top-10 finish at the ROVAL, Blaney simply told reporters, “strut” before walking to the Bee Gees’ ‘Stayin’ Alive.'” -Tiongson