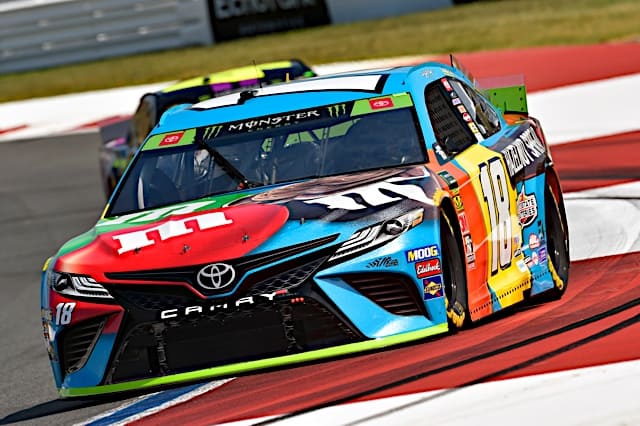 Kyle Busch parked his car last week after trouble early left him with nothing to gain. Do you have an issue with a driver calling it quits?

Adam Cheek: Honestly, in that situation, no. If it’s early in the race and they’re just not running well, yes, but Kyle had a crappy day, stuff on his car broke and it could’ve affected other drivers, as he mentioned in a tweet. I just think in that situation – a playoff race at an unpredictable track – it’s better to cut your losses, especially considering he had already locked himself in, and call it a day and not put yourself at risk or impede other drivers.

Amy Henderson: In general, yes. Busch has done it before–following a crash when he was still driving for Hendrick, his crew thrashed to get the car fixed, only to find that Busch had left the track. Who did they find to finish the race? Dale Earnhardt Jr., the man who would eventually replace Busch. But in this case, the car had a broken sway bar, Busch had gotten every point he could, and the team decided not to further risk the car or risk taking out someone else if something broke.  It was a team decision, which makes it a bit different than if Busch had just pulled into the garage, jumped out, and rode off into the sunset. So, a driver who gives up on his team, I have an issue with. A team decision not to tear up a car and possibly hurt either Busch or someone else? That was probably the right decision.

Should NASCAR put out a clearly defined set of rules for what is/ isn’t a caution or does it need to remain a situational judgment call?

Henderson: It needs to remain a judgement call…in most cases. A blown engine anywhere on track should be a caution because of the possibility of fluid and someone getting in it and causing another, avoidable incident. Beyond that, judgement call…but NASCAR needs to be consistent with those calls in all series. How many times have we seen the (absolutely correct) call not to throw a caution for a minor situation in Trucks or Xfinity but then it comes out for an even more minor deal in Cup?  That’s what needs to stop. They also badly need to use the local caution on road courses again. There’s no reason for a full-course caution in some situations eating up laps.

Cheek: Judgment call, although that method has its issues. For example, Preece’s spin didn’t necessitate a caution. He stopped the car and got going again right as the caution came out. I fully understand safety is the first priority, but just give him a second and see if he can get the car rolling. If there’s fluid on the track, of course they should throw the caution. No question. But for a spin that wouldn’t have been an obstacle to anyone else if they gave a driver the benefit of the doubt and a few seconds to recover? Again, give it a moment before making that decision. This is also a bigger issue on road courses – it takes forever to get around under yellow, it ticks off laps, and more often than not the drivers can get going again relatively quickly, plus the other driver’s spotters can let them know there’s a spin up ahead and they can check up accordingly.

ThorSport had their request for a playoff waiver based on the Ilmor engines failing denied. Do you think they got a raw deal?

Cheek: No, mostly because it would set a precedent for teams asking for a waiver for just about any reason they could think of. Enfinger had a phenomenal year and won the regular-season title without a race victory, and Sauter was very good as well, if less consistent that previous years. However, I don’t believe that a waiver should be an option. If it was a freak accident, like if a chunk of concrete came loose from the track and tore up both trucks, sure. That’s no one’s fault. But different equipment, engines and everything else are being tested all the time – it just happened to be at a playoff race and screw over two contenders. As disconnected as they may seem, I don’t think it’s that much different than a blown tire or a crash. It just happened at the wrong time for the drivers and team, and it’s also one of the most bizarre things I’ve ever seen happen during a race. But it would set a dangerous precedent.

Henderson: Yes, but NASCAR handled it correctly. The Truck Series engine rules are the problem, and NASCAR should review them. However, an engine failure is not reason for teams to get a waiver, regardless of the reason.  If it were, you’d have every eliminated Cup team seeking waivers citing that their leased engines were obviously deficient compared to the other teams, and it would only snowball from there.  I like the option to have a waiver for extreme circumstances, like a track issue, or like what happened with the Michael Waltrip Racing cheating scandal a few years ago–if, say Jimmie Johnson went out and intentionally dumped Denny Hamlin a couple times to get one of his teammates through, yeah, that would be a situation where NASCAR should consider a waiver. But this was the right call.

Ricky Stenhouse Jr. was abruptly let go from Roush Fenway Racing in favor of Chris Buescher for next year. Will RFR be more successful with Buescher than Stenhouse?

Cheek: Yes. I think Chris Buescher is immensely talented and underrated. He put together a streak of 16 top-20 finishes without wrecking or having issues. He takes care of his equipment, much like his teammate-to-be, Ryan Newman. Buescher won an Xfinity title – for Roush – in 2015, winning only two races but racking up 20 top-10 finishes, an average finish of 8.4 and no DNFs. Stenhouse is talented, absolutely, but he hasn’t made the playoffs in any year except 2017, when he won Talladega and Daytona. Buescher is coming home to RFR, and I think we see him pull off a (non-fog-shortened) win in the next two years.

Henderson: I think so.  Buescher is a very talented driver without showing the penchant for hitting things that Stenhouse has over the years. He won’t make enemies, and he won’t tear up a bunch of cars, and that alone could make him a great addition.

Honestly, I wish more drivers would park it more often once they have nothing else to gain and are just getting in the way.