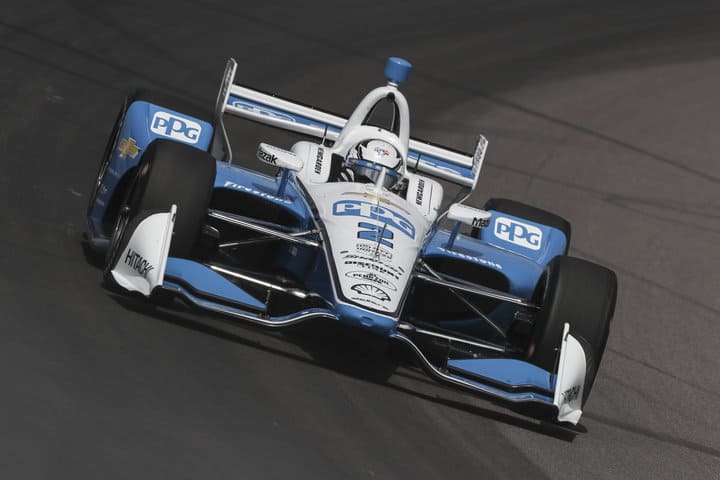 While I was making the long post-day-job drive from Indiana to North Carolina on Friday, I did so with a slight twinkle in my eye. I wasn’t going to make it to the track that day — my drive ended an hour from Charlotte at 1 a.m. — but I knew that those in attendance were in for a special treat.

Now I just hope it’s a sign of things to come.

The NTT IndyCar Series made the rare voyage to NASCAR territory in the form of a one-off exhibition run for champion Josef Newgarden on the Charlotte Motor Speedway Roval. For many in the NASCAR garage, it marked the first time that they’d seen an Indy car in person. That included Clint Bowyer, who told IndyCar.com that “the damn thing looks like a space shuttle.”

Newgarden’s run was just a short six-lap demo amid a chaotic weekend headlined by a playoff elimination race, but it continued discussion surrounding a potential NASCAR-IndyCar doubleheader that’s lingered throughout the 2019 season. The Tennessean himself even commented on the thought, a smile emblazoned on his face.

“Would I love a doubleheader weekend? If you are asking me personally – absolutely,” Newgarden said. “I would love that opportunity one day. I think it would be cool for the fans, without a doubt.

“Why would you not want to have that double-double on a weekend? They are both great championships, and I respect these guys so much. I love keeping in touch with what they are doing. So, to be able to be a little closer to them and vice versa for us, I think it would be a win-win for all of us.”

NASCAR and IndyCar have both existed in various forms for decades, but historically the two tours have kept apart. Indy cars led the way in open wheel, bolstered by the Indianapolis 500 and standout events like Long Beach. Stock cars filled the south with races like the Daytona 500 and World 600 before steadily branching outward during a strong period of growth as the new millennium arrived.

In their heydays, neither side humored much talk of a paired weekend. But in recent times, the downturns of each tour and softening of relationships between them have made the concept a true possibility. Indy car racing was humbled by the fallout from the CART-IRL split in the 1990s – a move that it’s still fighting to recover from more than two decades later. NASCAR’s once incredible growth stagnated through the 2010s, with attendance and ratings steadily dipping to sizes well short of its peak before seemingly stabilizing in recent months.

That’s a sad realization for both sides, but it’s an honest one. And it’s also one of the biggest reasons that a doubleheader could make sense.

Both tours have strong races, where attendance remains high and crowds still have the energetic feeling of the olden days. Daytona and Indianapolis will always carry prestige. Road America packs out nicely for IndyCar’s annual voyage, and NASCAR can count on a strong crowd for the Bristol Night Race.

But look beyond that and there are numerous other events that could benefit greatly from doing something different. There are two strong examples that can be found on both series schedules – Texas Motor Speedway and Richmond Raceway.

Texas has seen minimal attendance for its annual IndyCar showcase, and its NASCAR races often suffer from a poor appearance due to the 100,000+ seats it still has while other tracks have removed various grandstands. Track president Eddie Gossage expressed interest in hosting the first doubleheader when asked by The Athletic in June.

Richmond has yet to see how IndyCar’s return will fare in 2020, but the track’s spring NASCAR weekend in particular has seen its share of empty seats in the past.

If those don’t work, other prospective tracks could manage each tour all the same. Places like Chicagoland Speedway, Kentucky Speedway and Michigan International Speedway have prior history with IndyCar along with their NASCAR tenures. World Wide Technology Raceway at Gateway has no Cup date, but has seen strong attendance for IndyCar since returning to the series schedule.

The venue itself only matters to the extent that both tours can coexist on it and put on a decent show. So why not throw both series in the same weekend and see if it sticks? What’s at risk, empty grandstands?

Broadcasting the split weekend would be a challenge, but should be feasible in the latter half of the year. NBC carries broadcast duties for both series after NASCAR switches away from FOX in June.

Many within the racing industry are interested in both tours, including drivers on each side. Kurt Busch ran the Indianapolis 500 as part of ‘The Double’ in 2014, finishing sixth before flying to Charlotte for the Coca-Cola 600. Brad Keselowski tested an Indy car at Road America in 2016, while Conor Daly gave NASCAR’s Xfinity Series a go at the same track in 2018.

Not everyone is sold on the idea. Hulman & Co. CEO Mark Miles called the possibility a “longshot” in a discussion with the Indianapolis Star in June, though NASCAR’s Steve Phelps appears more open to the idea.

“I think it would be a good show,” Phelps said during a state of the sport address last November. “We have to figure out how that works and kind of the broader plans of what our schedule looks like for 2020 and beyond.

“Do we have conversations with Mark (Miles) and Jay (Frye)? We do. There are many people that do.”

Taking the plunge to bring America’s top two auto racing tours together for a weekend would being difficulties. One tour would have to swallow its pride and go first, and a track would have to sign on to the idea at risk of losing revenue that could be gained from hosting each series separately.

But at a time when the motorsport industry is fighting to stay relevant, a move to show unity and promote growth within its ranks is something that should be encouraged on all sides.

So bring the stars of NASCAR and IndyCar together. Let them cross-promote, share the same garage and see what the other tour has to offer. If six laps on a Roval were enough to catch people’s attention, just wait and see what 300 miles can do.

IF they do it, it needs to be an exhibition non-points event. NASCAR drivers in the Indycars, and Indycar drivers in the Cup cars. That would be interesting to see who from each series can best adapt to the other cars (Kurt Busch, obviously, would have a clear advantage since he’s raced an Indycar).

Otherwise, why taint a good Indycar race weekend with the NASCAR race? And the TV coverage… while not perfect, I find the Indycar broadcasts to be MUCH better than the Cup broadcasts. My fear is they come together for one race, then the Indycar broadcasts go to trash because some bigwig thinks it’s a great idea to mimic NASCAR by bringing phony cautions, “lucky dogs”. contrived restarts, and more commercials to Indycar.

If anything, NASCAR needs to mimic what Indycar is doing – they are headed in the right direction IMO. I started out as a NASCAR guy (and still hold out hope they can fix it), but Indycar has stepped up their game the last few years and are, quite frankly, putting on a better show.

NA$CAR better not since it would show how pathetic their events are when compared with Indycar. And especially the telecasts.