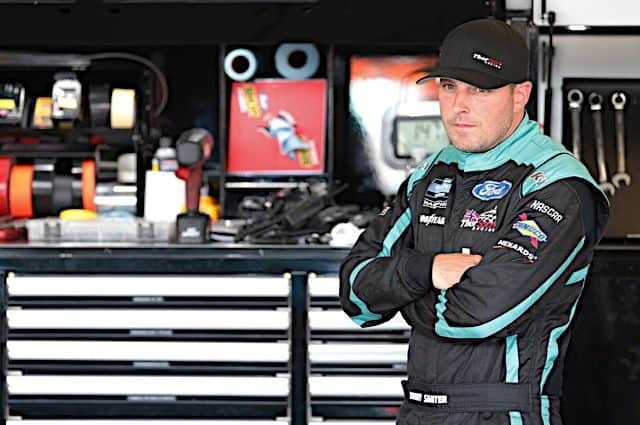 When the 2019 Gander Outdoors Truck Series playoffs opened at Bristol Motor Speedway, ThorSport Racing had three of its four drivers in the championship battle. But fast-forward three races and two of that trio got knocked out in one swoop at Las Vegas Motor Speedway just a couple of weeks ago.

Grant Enfinger was the first to drop, suffering an engine failure that was attributed to a rear seal leak that saw smoke billowing from the No. 98 Ford just six laps into the World of Westgate 200. Then, almost simultaneously, Johnny Sauter and Matt Crafton both went up in smoke on lap 40.

The fire under Crafton’s No. 88 Ford was heavy enough he was forced out of the truck on pit road, ending his night on the spot. Sauter, however, was able to continue after spending several laps getting repairs done, though he only lasted until a lap 68 restart before the damage to the No. 13 Ford proved terminal.

By the time the checkered flag flew, Crafton narrowly squeezed his way into the Round of 6, while Sauter and Enfinger were eliminated from championship contention. Now, it’s one thing to be knocked out because you got beat by the competition, but it’s another entirely when it’s a mechanical failure through no fault of your own that ends the title run.

The culprit for the trio of ThorSport teammates left watching everyone else race at Las Vegas Motor Speedway? The Ilmor spec engine designed to be a cost-cutting measure, along with an expectation of reliability.

“The combination of the high engine load combined with the extreme weather conditions in Las Vegas resulted in some engines suffering severe detonation,” Ilmor Engineering said in a statement. “Ilmor is taking new measures in engine calibration to ensure this situation is corrected for all future races.

“We deeply regret the impact that the engine issues created for our NASCAR Gander Outdoors Truck Series partners. We have requested every engine that raced at the Las Vegas event be returned to our technical facility in Plymouth, Mich. All the engines will be disassembled and inspected by our highly experienced team. Any damage as a result of the Las Vegas event will be corrected and the engine returned to the race teams as soon as required.”

Well, it’s great Ilmor essentially accepted responsibility for the failures at Vegas that plagued the team and several others. But that doesn’t change the fact that two of the organization’s championship-contending entries were eliminated.

“We commend Ilmor Engineering for their thorough review and the forthright way they’ve claimed ownership of the engine issues suffered by teams during the Sept. 13 race at Las Vegas Motor Speedway,” NASCAR said in its own statement. “The NT1 engine has played a vital role in the health of the NASCAR Gander Outdoors Truck Series, and that’s been evident in the tremendous competition we’ve seen all season. We’re confident that will continue in the years ahead.”

Following that statement, ThorSport made a push for NASCAR to utilize a little-known rule that states, “On occasion, circumstances will be presented that are either unforeseen or are otherwise extraordinary, in which strict application of the NASCAR Rules may not achieve this goal. In such rare circumstances, the NASCAR Officials, as a practical matter, may make a determination regarding the conduct of an Event, the eligibility of a Competitor or similar matters that are not contemplated by or are inconsistent with the NASCAR Rules, in order to achieve this goal.”

“We would like to see a little more done from our partners at NASCAR,” ThorSport General Manager David Pepper told SiriusXM NASCAR Radio. “There is a little-known rule in that has been exercised multiple times throughout the history of NASCAR — 1.6 C and D — the Except in Rare Instances rule, which we’re kind of pushing and trying to get NASCAR to react to here while we have a week and a half before we go to Talladega [Superspeedway] because we’ve been eliminated from the playoffs and it was none of our doing.”

Even Enfinger spoke up about the engine problems on Twitter.

6 of 8 playoff teams has engine issues at this elimination race. NOTHING any team had control over. All engines seem to have to same condition just different stages.

Ultimately, NASCAR opted to deny ThorSport’s request, meaning its only hope at winning a championship this season falls squarely on Crafton and the No. 88 team.

When ThorSport made its initial request, I never even considered anything other than a yes as the appropriate response. After all, the sanctioning body already set a precedent for adding drivers to the playoffs when it added Jeff Gordon as a 13th to the 2013 Chase field following “spingate.” An intentional spin by another competitor knocked Gordon out of the postseason through no fault of his own.

Sounds familiar, right? So why should a third party motor that the teams have almost zero control over be the reason a pair of the team’s drivers missed the playoffs? Through no fault of their own, a pair of drivers was knocked out of the championship battle.

I’ve seen several comparisons to blown tires and whether NASCAR should have considered allowing them to continue to compete for the championship in that scenario. Let’s be clear, though, tires are able to be manipulated by teams much more through camber and air pressure to name a few.

A long conversation with my friend and colleague Tom Bowles on the subject opened my eyes to the other side of the coin. That one race was not the death knell for Enfinger’s and Sauter’s seasons, even if it was the one that took them out of the playoffs.

You could point to several situations throughout the season where neither driver capitalized on playoff points or wins that could have kept their title hopes alive. Both of them had the same chance to win in the first two races of the Round of 8 as the rest of the field. In fact, you can even point to Sauter’s one-race suspension earlier in the season as a missed opportunity to put him in position to not be affected by the motor failure.

What’s perhaps most intriguing is that several teams suffered failures, again through no fault of their own. The issues teams faced that didn’t result in full failures were widespread enough that Ilmor ended up recalling all 32 of the motors used at the track that weekend. Would it really be that harmful for NASCAR to allow Enfinger and Sauter a shot at locking themselves into the Championship 4?

In an interview with NASCAR.com, Truck Series managing director Brad Moran said before NASCAR made its decision on ThorSport that “we don’t have that opportunity of a re-do.

“The playoffs are points earned throughout the season starting at Daytona [International Speedway], stage wins, race wins — that’s what gets you into the Round of 8,” Moran continued. “After that, it’s a three-race series, so it’s not just the one race. Unfortunately, we just don’t have that ability to pull a re-do on something like this without affecting the rest of the garage or players that are in there. So it wasn’t a one-race deal. It’s just a real unfortunate incident, but a mechanical issue that took out two of their trucks.”

Ultimately, NASCAR has seemingly dodged a credibility bullet by opting not to allow Enfinger and Sauter to have a shot at making the Championship 4. But what remains important here is that now that the sanctioning body has set a new precedent in how that rule should be utilized, it’s imperative that it sticks with it in the future. Otherwise, that will open up another can of worms in the credibility department.

Content Director Beth heads up management of our 30-person staff, acting as Tom’s main assistant with technology and personnel while working as Frontstretch’s Truck Series expert. The author of Truckin’ Thursdays and the coordinator of the site’s pre and post-race coverage, she also runs a periodic charity column that spotlights when NASCAR gives back. A childhood transplant to Texas, Beth is a 15-year writing veteran who has contributed content to BRANDT and Athlon Sports, among other outlets.
@NASCARBeth
Previous Frontstretch Podcast: Tyler Reddick Chats Consistency at Richard Childress Racing
Next Fire on Fridays: Is The Pay To Play Era In NASCAR Ending?

4 Burning Questions: Are the NASCAR Playoffs Too Long?