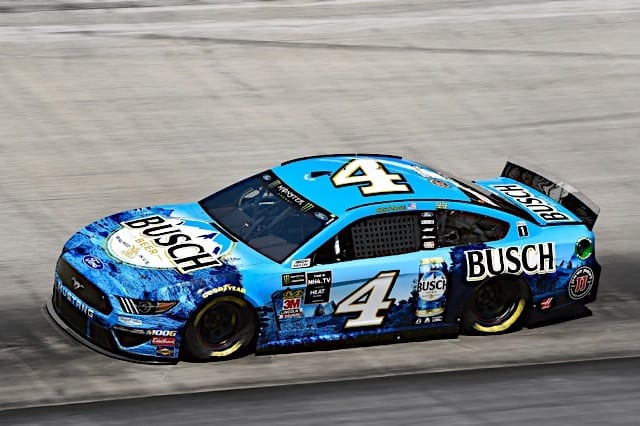 After a wild weekend of road course racing, the Monster Energy NASCAR Cup Series makes its second trip of the season to the Monster Mile. The first race in the round of 12, the Drydene 400, is scheduled for Sunday (Oct 6) at 2:30 p.m. ET on NBCSN.

As you may recall, Dover International Speedway is a one-mile concrete oval that has been known to  “bite.” It’s a very fast track for its size and has high banking. As is the case at courses of this length, cars will use the higher horsepower package without aero ducts.

Not only will Sunday’s race begin the second round of the playoffs, but it also marks the 100th event at the Monster Mile. The 99th race, the Gander RV 400, saw two drivers lead well over 100 laps each. At last year’s fall event, a single driver led nearly 300 laps. Therefore it’s these dominators that you’ll want featured in your lineup. Also, check Saturday’s qualifying results for any key-value plays.

Before I dive into this week’s picks, here are the results from the Charlotte ROVAL:

Most of the drivers were good plays, and Ryan Newman was in a good spot when he barely missed the chicane in the closing laps. However, if you didn’t have Chase Elliott and Kevin Harvick, you probably didn’t win money. In a $1 single entry double up, 227.25 was the lowest score in the green. Conversely, in the $1 Happy Hour tournament you needed to score 230 DraftKings points to win something.

Harvick has a very good chance to win this race, based on his recent season and track history as well as his practice times. First, the freaky fast Stewart-Haas Racing No. 4 Ford had the quickest 15-lap average among 22 drivers in final practice. He also had the fourth-fastest 10-lap average and posted the third-quickest single lap speed in that session.

Second, Harvick has really come alive in the last few months. Aside from a mechanical failure at Bristol Motor Speedway, he has three wins, six top fives and nine top 10s in the past 10 races. His most recent win came at Indianapolis Motor Speedway, where he flat-out dominated and led 118 laps from the pole.

Finally, his recent stats at Dover have been mostly good. Harvick has two wins, four top fives and six top 10s in the last nine races at the Monster Mile. Additionally, he’s led 488 laps in the past three races there. While he only led one lap in the 2019 spring race, he still finished fourth and posted 36 fastest laps. He should perform well again Sunday, as long as no problems occur.

Okay, what can I not say about this guy? After recovering from a turn 1 wreck at the ROVAL last week, Elliott drove through the field and won the race. He topped that off with a well-done celebration, I might add (though his car got away from him). Yes, the No. 9 Hendrick Motorsports driver is good on road courses, but he’s also extremely good at Dover.

In fact, he won this race a year ago, and earlier this season led 145 laps but finished fifth. That race was the second time in seven starts that he led over 100 laps at the Monster Mile. Also, in both of those races Elliott posted 47 fastest laps. Last, did you notice he has one finish outside the top five? Even that was a 12th-place in last year’s spring race. He’s a lock for my lineups, and he should be for yours too.

The No. 42 Chip Ganassi Racing driver has had a pretty good season after a rough bout of undesirable finishes early on. Since the Toyota/Save Mart 350 at Sonoma Raceway, Larson has five top fives and 10 top 10s. Though he still is winless this season, the Monster Mile is a track where he might just get that victory. Between both 2017 races, he led 387 laps, and earlier this year he began and finished third. He’s also recorded several fastest laps at every race there. Finally, Larson had the best 10-consecutive lap average in final practice Friday. Look for him to run and finish near the front of the pack Sunday.

Harvick’s SHR teammate doesn’t have the same extensive history but he does have four out of five top 10s at Dover. Earlier this season Suarez led 21 laps and had 26 fastest-laps, ending the race outside the top 10. Even though he only has one top 10 in the past five races this year, he still has proven capable of finishing higher than he starts. For example, at Bristol he ended the race 10 spots higher in eighth (though he was one lap down). He also finished ninth at Richmond Raceway after starting 14th. Suarez does come with a risk, but based on his track history and upside (should he start further back), he should be a good play anyway.

I know you may be thinking, “why would I play this guy?” Well, for a few reasons. For one, Wallace completed last year’s race 23rd, which was six positions higher than where he began. Two, he hasn’t qualified well often this season, but has a few good finishes especially of late. At Bristol, he started 22nd and ended the race 14th. At Indy, he put on a show and finished third after qualifying 15th. Finally, at Richmond, Wallace started at the back of the pack and earned a 12th-place finish. All of those races produced good DraftKings scores for his price, and something similar could happen this weekend.

Tifft hasn’t had the season he was looking for so far, but at his price, you probably could do worse. The Front Row Motorsports driver did finish 20th at Richmond and 25th at the ROVAL the past couple of races. Also, at IMS he was looking very strong and was on his way to a top-15 finish when Suarez wrecked him. Still, if he’s able to avoid trouble on the track and maybe take advantage of any incidents that might occur in front of him, Tifft would be a valuable fill-in to your lineup.