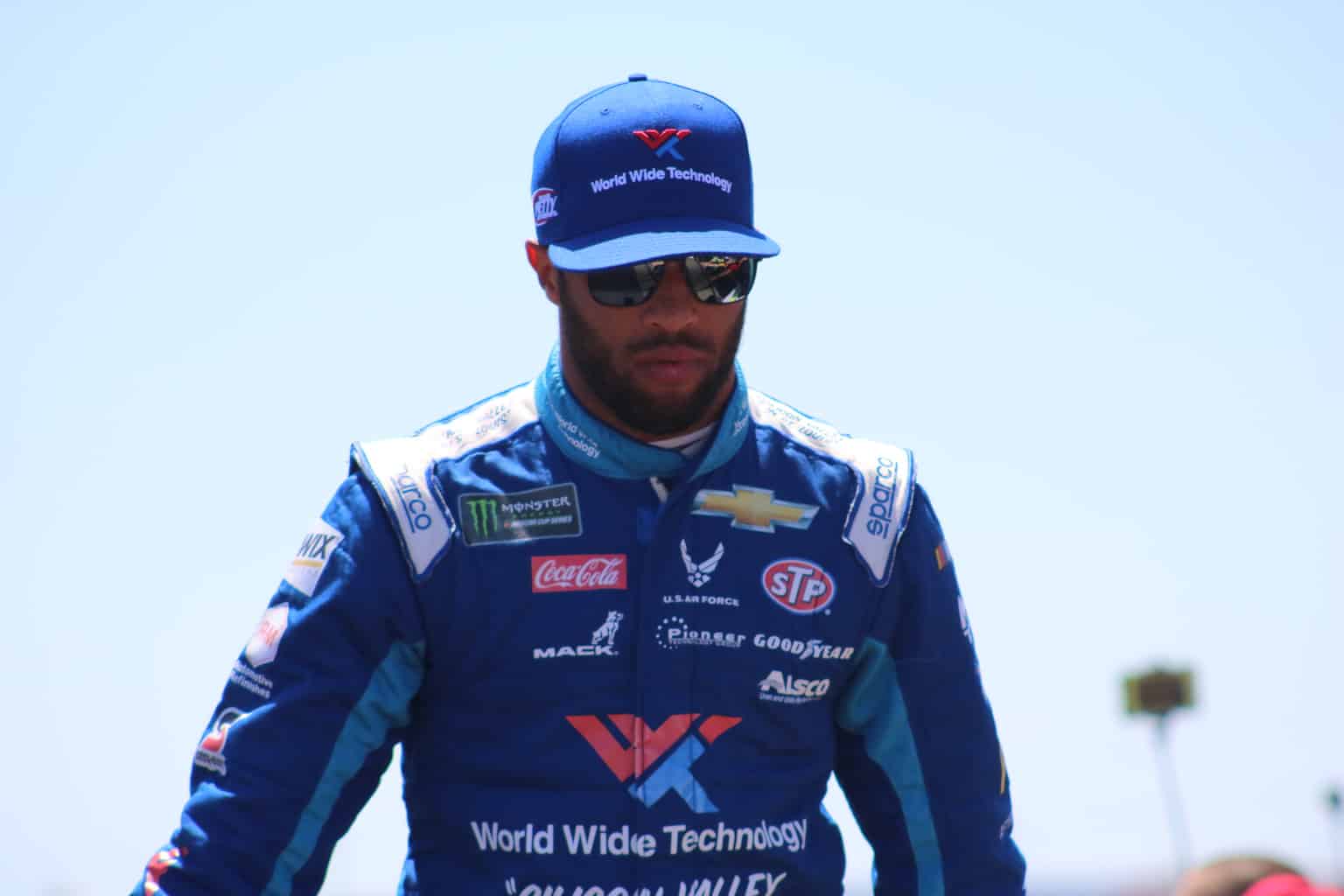 On Saturday (Sept. 5) at Dover International Speedway, the tables seem to have turned, as Wallace was the one under the weather.

“Feel like karma is coming back and getting me I guess,” Wallace joked. “(I came) down with something Thursday morning right before we flew out. Untimely, but that’s alright. Seems like I always get sick this weekend.”

The week has been dominated with reaction from Wallace’s infamous water splashing, which stemmed from frustration after Bowman intentionally spun Wallace.

When asked if he regretted anything, he made it clear he didn’t mean for anybody else to get involved.

“I regret getting the medical staff, Jeff Gordon, Jeff Andrews, getting them involved, getting them soaked,” he said. “But everything else, no. I’m good […] I reached out to Jeff  (Gordon) hours after the incident went down, talked to him. Asked him to reach out to Jeff Andrews, I didn’t have his contact information. And I actually called Dr. Angie on Tuesday, talked and apologized to her. Reached out to everybody I needed to reach out to. Gotta look at the big picture here. No. 88 is still in the playoffs.”

Bowman was in the line of fire, no matter what he were to say.

“He couldn’t have said anything,” he said. “I was still going to throw water on him.”

NASCAR’s Steve O’Donnell reached out to Wallace in the days that followed to make sure he knew where the sanctioning body stood.

“He shot me a text, just obviously wanting to look out for everybody involved in the situation and make sure I handled it the right way,” Wallace said. “That was it.”

Wallace dove into the incidents that transpired leading up to Charlotte, primarily at Richmond Raceway the weekend prior.

“Same thing as Richmond: he ran over me as soon as he got to me there, got underneath me and ran me up the race track (the next time),” he said. “So I’m like ‘No. 88 is getting wrecked here. If he ever gets by me, he’s getting wrecked. In the fence, done.’ And we ended up beating him. So I’m like ‘oh, alright, that’s the higher road, it’s over with. It’s done.'”

But then the ROVAL happened, and Wallace was ticked off from the start.

“And then Lap 1 of the new configuration at the ROVAL after we all sat there and watched the Xfinity race and watched a car come through there from 15 cars back and wad out six of ’em–its like, alright, we’re at the Cup level, let’s take it easy this first lap and just get through there,” he said. “And what do you know, he moves the No. 3 (Austin Dillon) and me.”

“Shoves me through the chicane, gives us a penalty–NASCAR and I talked about that, and we’re on clear terms about why we got that–but it’s Lap 1. C’mon. It’s a new configuration, how treacherous it is, and he runs over us. No excuse for that. I believe he was the only car there to run over someone Lap 1, so everybody except for one car had the mentality of ‘let’s take it easy, let’s figure out how this chicane is going to work on the initial start.'”

Wallace, who has a best finish of third at Indianapolis this season, said he won’t change how he races. He still has a job to do.

“There’s, what, 28 other cars that are out there that aren’t in the playoffs?” he said. “We’re all out there racing for a checkered flag, too. I had messed up to let it get that far of being run over or whatnot. I’d actually been off social media all this week, so I hadn’t seen any comments from anybody. Looking at it, I’ve been run over multiple times by that car, and I’d had enough. I’d seen where Clint Bowyer says ‘you keep poking the bear, eventually he’s going to come out and get you.'”

The incident at the ROVAL stemmed from Wallace flipping off Bowman for multiple laps, something he typically does. He said Martin Truex Jr. actually gets it every time the No. 19 passes the No. 43, and considers it a joke.

“It’s still going to be the same,” Wallace said. “I need to stop doing it, because I have a lot of eyes on me. At first it was just a joke, but it’s become a thing and people are getting really sensitive over it, over a finger, want to retaliate and right rear somebody on the race track, which is grounds for taking your gloves off mid-fight. After the race, I’d just had enough of it.”

Wallace had an incident at Watkins Glen with Kyle Busch. The following weekend at Michigan, the two chatted, shared their sides, and moved forward. But Wallace has no plans to chat with Bowman.

Wallace admitted that things could have been handled differently, and wishes others didn’t get looped into it.

“Emotions run high and it’s one of those things,” he said. “There’s a little bit of it I regret, definitely him (Bowman) being a part of it, not really.”

As for how things will be handled moving forward, Wallace said that’s yet to be determined.

I call bullsh*t. Now ,I’m sick( feel sorry for me), I didn’t mean to splash anybody else ( this was really bad PR) but I would do it again (hope NASCAR promotes the crap out of this).

Yep bubba, you kept poking the bear and he bit you. Idiot, you even reversed that saying. You were the one kissing the wall, remember now

Darrell does believe his own bullshit. Darrell, you are a self centered asshole. And I am no fan of Bowman..

I’m sick this week. Pity me. Knew it was coming. NA$CAR now chastising drivers by text? That has to be a first. I could imagine Dale, Sr. or Petty receiving one of those messages!!

What a road of clap.
Maybe he should have hit him in the back of the head with a shovel.

Bubba has far too many blow ups and far too many pity parties in his own mind. He really has a problem with good sportsmanship and I feel representing The King he should be more of a big boy. Yes I get that after a race that are hyped up because as a fan I am also if my driver has not finished well or had a incident with another driver. That being said these new young bloods keep it entertaining.

Obviously Bubba has some real psychological problems. NASCAR should send him to a shrink for a “Road to Recovery.”
He is more danger on the track then someone on Claritin-D, vitamin supplements, etc., etc.