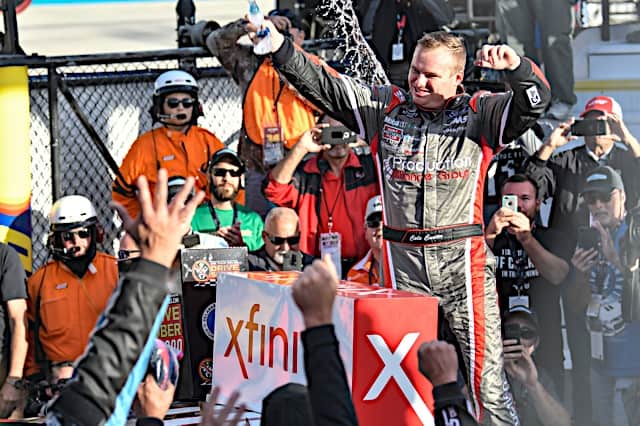 Custer finished second in Stage One, but a terrible pit stop put him back in 13th to start the second stage. Allgaier led all of Stage 2, while Custer was able to finish sixth.

Chase Briscoe slowly worked his way up through the field, after winning the pole and starting at the rear of the field (electrical.) Briscoe took the lead on the restart to begin the final stage, and held it until green flag pit stops.

Custer, along with playoff bubble drivers Michael Annett and Justin Haley, stayed out late in the pit cycle, then were rewarded for their efforts when Dillon Bassett spun entering pit road to bring out a caution.

After Allgaier was awarded the free pass, and Briscoe and Austin Cindric took the wave around. There were only six lead lap cars on the restart.

Custer rocketed past Allgaier on said restart, then survived one more with seven laps to go to earn the win, his seventh of the season, and ninth in 100 career NXS starts.

Cindric became the de facto pole sitter after Briscoe dropped to the rear at the start of the race and led the opening laps before being passed by Allgaier on a lap 26 restart. He finished third.

As far as the playoff battle to end up above the cut-off line, it didn’t heat up until the aforementioned Bassett caution. Haley restarted fourth on both of the late race restarts, needing to win to advance past Annett in the next round. Haley drove as high as third in the closing laps, but ended up finishing fourth.

Briscoe was fifth and Annett was sixth. Noah Gragson was the last driver on the lead lap in seventh.

John Hunter Nemechek needed Annett to have a problem in order to gain ten more points to get by him in the standings, but the No. 1 held firm on the lead lap. Nemechek ended up finishing eighth and did not advance.

Zane Smith was the lone non-playoff driver in the top ten in (ninth), and Ryan Sieg finished tenth. Sieg, with Nemechek and Haley, failed to advance to the round of eight.

There were 16 cars that did not finish. On the opening lap of the race, Tyler Reddick (finished 12th), slid into the on the backstretch. Allgaier followed him, and Joe Gibbs Racing teammates Harrison Burton and Brandon Jones ended up wrecking behind them. Burton finished last and Jones was second to last, with Jones joining Sieg, Haley, and Nemechek in not advancing.

On Lap 22, Nemechek accidentally spun out Mike Harmon on the frontstretch to bring out the second caution of the day.

He said it wasn't intentional, but was "unnecessary that early in the race."

No @Applebees invitations will be sent ??‍♂️? pic.twitter.com/uyE38DDtVT

Early in the race. Christopher Bell had a fuel pressure problem and went behind the wall to fix the issue. Bell came back out 13 laps down and passed cars on every restart, still having top five speed throughout the race. However, he finished 25th after exiting the race during the second-to-last caution.