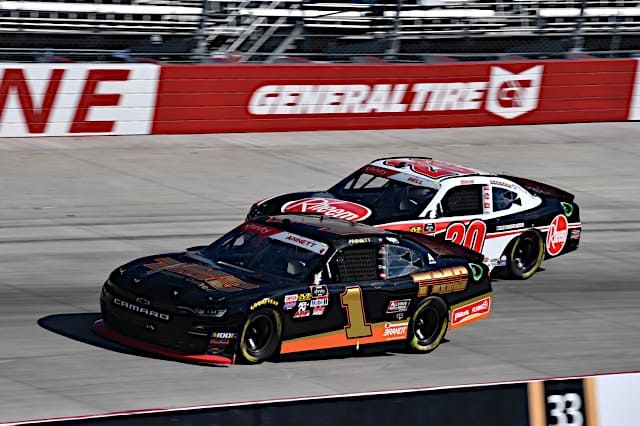 Michael Annett may just be the most improved driver in all of NASCAR in 2019.

The eight-year Xfinity Series veteran finished sixth at Dover International Speedway on Saturday afternoon (Oct. 5) to continue his playoff run and clinch his spot in the Round of 8.

“Definitely a ton of relief,” Annett said. “I obviously have a ton of confidence in these JR Motorsports cars when we come to Dover, but you’re also walking into The Monster Mile, and they’re so many stupid things that can happen.”

“I knew if we just ran our race and did everything I’ve always done when we come here, we’re gonna be fine. But then there’s just always the unknown.”

The day started with a hiccup for the No. 1 team, as Annett’s crew had to change an engine, forfeiting his starting position. Annett worked his way from the rear to 10th by the end of stage one, earning one stage point.

“Obviously, we had to start at the back, and that didn’t work out so well for me at the [Charlotte Motor Speedway] ROVAL, so I was kind of cautious on restarts,” Annett said. “So you’re kind of passive aggressive almost on a deal like that.”

Annett said he continued to race that way for the remainder of the race. He restarted third on the final restart and could have potentially contested leaders Cole Custer and Justin Allgaier for the win, but chose to race defensively instead.

“You want to go for the win. I was just talking to Justin [Allgaier], I want to shove him down into Turn 1, but I’m looking in the mirror and making sure I don’t get put three wide and the [No.] 98 going for the win,” Annett said. “So just a bunch of things you don’t enjoy doing in the race car and just thinking about winning races.”

Perhaps Annett’s most conservative phase of the race came during an 80-lap green flag run.

“All of us have watched enough races here and seen enough guys blow a right front [tire], so you’re waiting for something stupid like that to happen,” Annett said. “You’re pushing almost 70 laps on these tires, and we haven’t gone past 45. You start thinking about stuff, but it worked out great though.”

Annett was in great position to keep John Hunter Nemechek from beating him out for eighth in points, and a caution during a green flag pit stop cycle all but sealed it for the No. 1 team. Nemechek and most of the field had pitted when the caution flew, leaving Annett and five other cars on the lead lap.

“I saw the [No.] 23 pit and I knew Travis [Mack, crew chief] would be calling me next and the caution came out, so it worked out perfect,” Annett said. “We had a goal when we came here and we accomplished it.”

One year ago, Annett didn’t even make the playoffs and only posted three top 10s all season. Now, Annett is in the Round of 8 and feeling even more confident going into the next round.

“I feel really good,” Annett said about the second round of the playoffs. “I’ve kinda been saying all along if we got through the first round, I’m really confident about the round coming up.”

The next event will take place at Kansas Speedway on October 19.