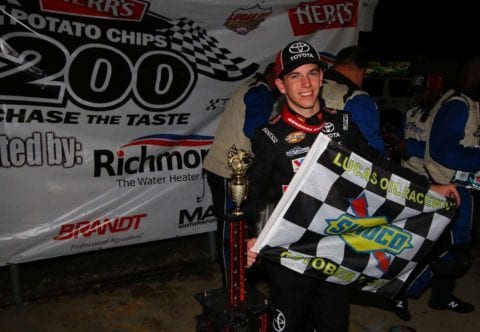 Call it luck. Call it being in the right place at the right time. Call it racing well this season, winning half of the races he has been entered in this ARCA Menards Series. Regardless of description, Chandler Smith won the Herr’s Potato Chips 200 at Lucas Oil Raceway for his fifth career ARCA win.

Inclement weather ended the penultimate race of the season after 167 of 200 laps.

Smith jumped out to the lead on lap 161 ahead of teammate Christian Eckes. When Mother Nature began to rain on the field, ARCA officials assessed whether to resume the race. After a few laps running under caution, the race was called, and Smith won, earning another kiss from Venturini Motorsports team owner Bill Venturini.

“My guys have worked their tails off,” Venturini said. “It’s an accumulation of everything — my guys, the equipment, the drivers. I give that credit to my son Billy who handles the competition side of our company.”

Corey Heim finished in fourth place and Hailie Deegan was fifth. Deegan’s good finish earned her a hug and a kiss on the cheek from Venturini, who also owns her car.

Deegan ran as high as second, but during a lengthy green flag run, she noticeably was unable to dime her car into the corners. She pitted during the next caution flag period to finish fifth, her career-best ARCA finish and her first career ARCA top-five finish.

“We were not a long-run car — it was a short-run car for sure. It feels good to get a top five — I’d say that was our first goal. We accomplished that, now we’ll move onto the next one. Next goal is to win, hopefully, at Kansas [Speedway].”

The two dominant drivers in the race were Smith and Ty Gibbs. They both gapped the field at the beginning of the race until the first caution flag flew on lap 52.

All the lead lap cars pitted during the caution flag period, and a slow stop due to an issue with the left front tire forced Eckes to lose several positions and restart further back.

When the restart occurred, Mayer charged to third place, pressuring Smith and Gibbs. He ran either the second or third fastest lap times on his laps, and a blanket could’ve been thrown over the front three.

When the second caution flag flew for a spin on lap 96, Joe Graf Jr. received the lucky dog position. Graf Jr. pitted for fresh tires, and he raced hard towards the front.

Graf Jr. passed Smith for second place and reeled in Gibbs for the lead. He then shoved Gibbs into the wall in turn 1 and took the lead on lap 144.

The contact between the two resulted in terminal damage to Gibbs’ No. 18 Toyota. He finished in 15th place, not indicative of his 143 laps led.

During the caution flag period, everyone except Graf Jr. and Carson Hocevar pitted for tires. Graf Jr. ultimately finished in 10th place as his tire strategy backfired. When the drivers pulled their cars on pit road after the rain fell, Gibbs angrily walked over to Graf Jr.’s No. 77 Ford, but officials prevented the two drivers from any possible altercation.

On the restart on lap 151, Eckes jumped out to the lead. Smith fought back and took the lead on lap 161, just as the rain began. Smith led the final laps run under the yellow flag, and he won his last scheduled start of this season.

With one race left to go this season, Eckes leads teammate Michael Self by 20 points. The season will end at Kansas in two weeks.

“It’s exciting,” Venturini said on his two cars racing for the title. “We’re going to win the driver and owners championships. They get along fine — it’s unbelievable. If I told you they got along as good as they do, you’d think I was lying. Honestly, they get along fantastic with each other. The edge goes to Michael for Kansas [Speedway] like I would’ve given the edge to Christian here. Michael has a shot at winning Kansas better than anybody, and it will depend on where Christian ends up. Either way, they’re going to end up first and second.”