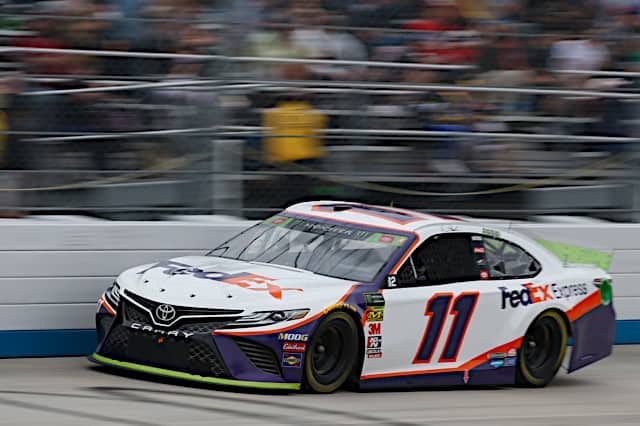 Denny Hamlin had a rocket ship out front in Sunday’s (Oct. 6) Drydene 400 at Dover International Speedway, but lapped traffic gave him hell.

After leading 218 of the opening 228 laps of the race from the pole and picking up a playoff point virtue of a stage one victory, Joey Logano didn’t give his spot up easily. That allowed both Martin Truex Jr. and Kyle Larson to get by late in the stage. Logano’s No. 22 Ford was more than 20 laps down after starting the race in the garage for something amiss in the rear of the car.

Instead of picking up 10 stage points and an additional playoff point, Hamlin scored eight points and was none-too-pleased with Logano.

“I thought the [No.] 22 was trying to stay on the lead lap, but it said he was 24 laps down, and so he was air blocking us there,” Hamlin said. “We lost the lead and lost that stage two. After that, we lost control of the race and the track got tighter, there was no cautions to pick up the rubber. We just got tight and once we lost control and lost the clean air, it was so difficult to pass.”

But what really set Hamlin off was when he heard Logano’s reasoning for racing hard was because he could pick up positions, despite being more than 20 laps off the pace.

“Make up positions? He’s 24 laps down, that’s the most idiotic statement I’ve ever heard,” Hamlin said. “We’re battling for the end of the stage, it’s not your day, you’ve had bad luck, we get it, but I don’t understand that at all.

“He’s not fighting for anything. He just needs to run around the racetrack, stay in one lane, maybe the high lane because nobody’s running up there, get the laps over with, get the race over with, go home, work on it at Talladega and try to win that race.”

After leading the most laps he has in a single race in over nine years, Hamlin was pleased with his day, knowing Dover hasn’t always been his best racetrack.

“We needed control of it because I knew the balance of my car wasn’t perfect,” Hamlin said. “Every time I caught lapped cars my lead would shrink back down, so I really needed clean racetrack. Once I lost the lead it just wasn’t as good and we fell back to fifth.”

The fifth-place effort was Hamlin’s fifth career top-five finish at Dover in 28 starts.