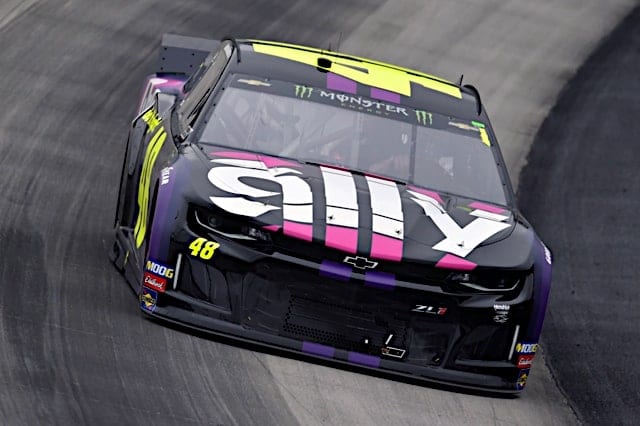 A top-10 result at Dover International Speedway for Jimmie Johnson would usually be considered a disappointment, given his track record at the Monster Mile.

With 11 wins (most all-time), a trip to victory lane is customary for seven-time. But given the No. 48’s recent struggles while in the midst of an 89-race winless streak, by far the longest of his career.

However, Johnson was aiming for a victory in Sunday’s (Oct. 6) Drydene 400 at Dover. He had the speed in his Hendrick Motorsports Chevrolet that was customary in the mid-late 2000s. When the checkered flag flew, he settled for eighth.

“I felt like we had a shot when we were in clean air, our lap times were great,” he said. “Just as everybody experienced, it’s just really tough to pass. We had a few things set us back and lost track position throughout the day. Really fast race car was able to pass some, which I don’t think many could pass at all. All in all a good day, but ran better than eighth most of it and wished we could’ve finished higher.”

I remember a day when you could pass with a faster car, that was not today… All in all a strong weekend with a few areas to dial in. ??

The result was Johnson’s best finish since Daytona in July and his 11th top 10 of the season. Moving forward, he’s ready to get to Kansas Speedway to try and get his first checkered flag in over two years, a track where three HMS drivers finished inside the top six.

“Kansas we’re excited for and feel like we can control our own destiny there,” Johnson said. “The high downforce tracks, the Hendrick cars have been much more competitive. I know we’ve all been excited to get back to Kansas and build off what we’ve ha going on here the last month or two.”

As mentioned, Johnson’s mindset whenever the circuit comes to Dover is winning. That’s proven.

Although a top 10 was a stepping stone to what the ultimate goal is, he isn’t satisfied.

“I’m here to win the race and that’s where my heart and mind is,” he said. “Throughout the day, I feel like we did have pace to run in the lead if we cold cycle through with pit stops and get there. Unfortunately, we had some wacky things on pit road. I had to avoid cars coming in and out of their stalls, just set me back. We’d come in fourth, go out ninth, I think the way it all worked out with our pit box location, I lost positions each pit stop. Just really tough to recover from that. Really disappointed in that, but in my heart I know we’re going in the right way and the team’s bringing a lot of speed to the track and I feel good about that.”

Could that win be around the corner? It’s not as farfetched as one might think, according to Johnson.

“You never know in this sport,” he smiled. “I do, I felt like it could’ve been today with the way practice went. I certainly had that feeling in my stomach and it just didn’t happen today.”

Johnson will look to earn his third Talladega Superspeedway victory next weekend.