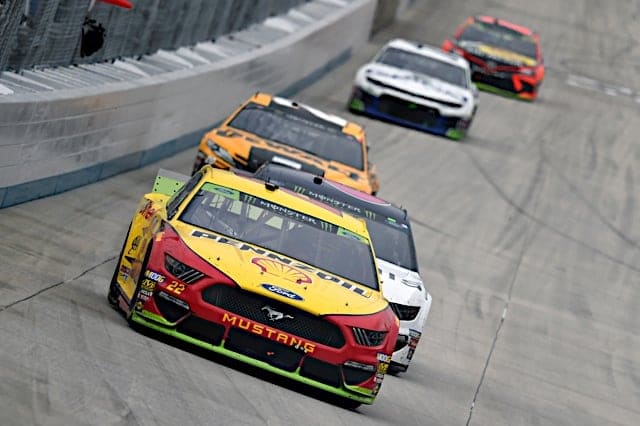 Joey Logano‘s race was over before it even started in Sunday’s (Oct. 6) Drydene 400 at Dover International Speedway, as the No. 22 Ford had a failure in the rear of the car on the pace laps.

Before Logano could even turn a lap at top speed, he was 22 laps off the pace.

Instead of laying over for the leaders, Logano raced hard throughout the race, albeit not for position. In the process, he upset a lot of the frontrunners.

“We were out there racing,” Logano said. “I’ve got to race. There were four or five cars that I could possibly catch, that’s five points. I need all of them. I’m in by zero points right now, so we better get them all. When you think of that, I’ve got to try to stay the lap that I’m on and try to get every car that I possibly can.

“I’m still racing. I ran as hard as I could this whole race. I don’t have anything to show for it, but we ran as hard as we could. We ran it as if we were on the lead lap and did everything we possibly could to be better. We’ll have to keep pushing forward to gain as many points as possible these next two races.”

Entering Dover, Logano was seeded fourth in the standings, 24 points above the cutline. Following the Monster Mile, he’s in a dead tie with William Byron, though the No. 24 team currently holds the tiebreaker via a 13th-place finish at Dover.

Logano stated he doesn’t remember if he’s ever not started a race due to a parts failure.

“I don’t know what it was yet,” Logano added. “Something in the back didn’t do what it was supposed to do when you hit the gas. It’s really weird because it was fine for qualifying. The car was impounded from there, so somewhere between there and the start of the race something broke.

“I try to erase that stuff from my mind pretty quickly. I’m sure it has at some point. I’ve broken plenty of stuff, that’s not to be surprised. Weird timing for it, for sure.”

Heading to the wild card race that is Talladega Superspeedway next weekend — a track Logano is a three-time winner at — he believes the No. 22 team just has to get after it.

“I’ve just got to go,” he said. “Our approach doesn’t change. We’ve got to score every point that’s there.”