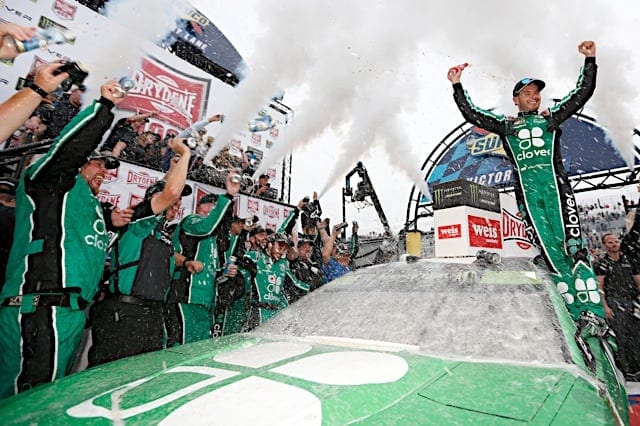 At the conclusion of the 100th Monster Energy NASCAR Cup Series race at Dover International Speedway, it was Kyle Larson winning the special golden Miles the Monster trophy.

It’s his first triumph in 75 races, besides the non-points win in this year’s All-Star Race in May. It locked the Chip Ganassi Racing driver into the Round of 8 for the first time in his career; he’s also the lone driver locked into the round heading into Talladega Superspeedway next week. This is also the first time a CGR driver has advanced to the third round of the playoffs.

Martin Truex Jr. won stage two after passing Denny Hamlin with just 11 laps to go in the stage. During the following stage break caution period, a crew member on the No. 19 team slipped during the four-tire pit stop and Truex lost five positions on pit road. Larson kept the lead on the restart and held it throughout the last 151 laps (outside of giving it up during a green flag pit cycle), in spite of lap traffic constantly racing the Californian hard during the run.

Truex finished second and Alex Bowman charged through the final stage to finish third. Kevin Harvick brought his special “Harvick beer” sponsored No. 4 Ford home in fourth, while Hamlin ended up fifth. Hamlin, the polesitter, won the first stage and earned himself a playoff point.

Kyle Busch salvaged a sixth-place finish after recovering from a penalty for speeding on pit road during the first stage break. Matt DiBenedetto, in seventh, was the first non-playoff driver in the finishing order. Jimmie Johnson was the final driver on the lead lap in eighth, while Kurt Busch was the first driver a lap down in ninth.

Elliott, at what was his best racetrack entering this weekend, blew his engine on lap 8 of the 400-lap race. He finished last in 38th.

Joey Logano was in the garage when the green flag waved on Sunday afternoon. He had a rear axle problem fixed, but didn’t head onto the track until lap 23. Logano raced Hamlin hard in the closing laps of the second stage, allowing Truex to make the only on-track lead change of the day. Logano ended up 34th, 25 laps down.

On lap 297, Ryan Blaney had a rear spindle problem and headed to the garage. The No. 12 crew couldn’t get the Ford back out onto the track and Blaney finished 35th.

Other playoff driver results included Clint Bowyer (10th), Brad Keselowski (12th) and William Byron (13th). The only cautions of the race were Elliott’s engine failure on lap 8 and the two stage break cautions.