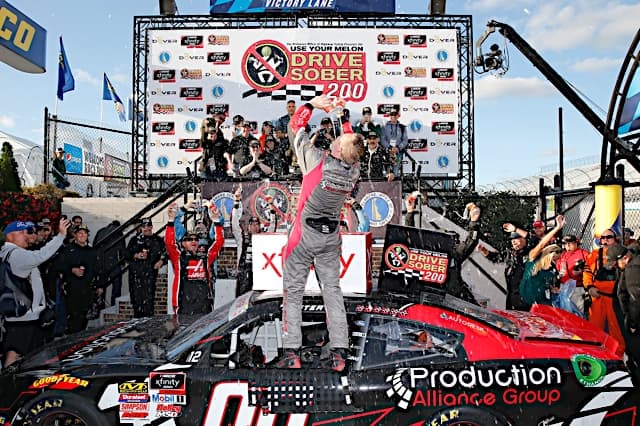 It was a tale of two halves for Sunday’s (Oct. 6) Drydene 400 at Dover International Speedway.

In a race that saw Miles the Monster munch on playoff cars’ mechanics, Kyle Larson raced without issues to capture his first victory of the season.

“This Clover Chevy was so good,” Larson told NBCSN after the race. “After the first stage, I kind of changed my driving style up and I felt like I made the car better at the same time, and it really benefited on our long runs. That’s as good as I’ve ever been on cutting the bottom here. A great combination here, good to be fast in practice, then to be good in the race and get the win.

“This is unbelievable, I’ve always wanted to win a Cup race here. I’ve been close a number of times so to get a golden monster is going to be pretty sweet.”

It was also Larson’s first-ever victory in the playoffs and berth into the Round of 8.

On a weekend that celebrated milestones — the 100th race at the Monster Mile and Denny Hamlin’s 500th Cup Series start — it was Larson who had one of the biggest moments of his career.

“Million dollars earlier this year was pretty nice,” Larson said. “But no, to win a playoff race – this is my first playoff victory – is special.”

In overcast conditions, Larson was in the running all afternoon, though Hamlin dominated much of the first two stages. Martin Truex Jr. got around Hamlin and won stage two, but a slow pit stop under caution saw Larson snag the lead off pit road. Though Truex recovered, he couldn’t quite catch up to the No. 42 Chip Ganassi Racing driver.

For Larson, it wasn’t how one begins a season, but what one learns and perseveres throughout the year that equals success. He and his team fixed the early season mistakes and got past the crashes to finally win his sixth career Cup race. – Joy Tomlinson

Though he had a bunch of speed in the two Xfinity Series practice sessions on Friday at Dover, Cole Custer’s speed didn’t transfer to the race until it mattered on a late-race restart.

In a race that was dominated by Justin Allgaier and Chase Briscoe, who scored the pole, only to start at the rear for an electrical issue on his cool-down lap, Custer was victorious for the seventh time this season. In addition to the win, the No. 00 team earned five additional playoff points via the victory.

Allgaier recorded his fifth runner-up finish since his last victory, while Austin Cindric, Justin Haley and Briscoe rounded out the top five.

As for the Xfinity playoffs, Custer, Allgaier, Briscoe, Cindric, Tyler Reddick, Christopher Bell, Noah Gragson and Michael Annett advance to the Round of 8 after John Hunter Nemechek’s team failed to execute on Saturday. Heading into the final stage in the Round of 12, the No. 23 GMS Racing team had Annett’s No. 1 JR Motorsports team on its heels, scoring stage points in the first two stages.

In the end, there are no real surprises on who was eliminated. The series will have its first off week in 15 weeks this weekend before heading to Kansas Speedway next week. – Dustin Albino

Christian Eckes may not have won the war Saturday night in Indianapolis, but he did win part of the battle headed to the season finale at Kansas Speedway in two weeks. Eckes took the point lead from Michael Self with just one race remaining in the ARCA Menards Series schedule. The positive for Self is that he’s dominated in Kansas in the last few seasons.

Meanwhile, Chandler Smith managed to be in the right place at the right time to earn his seventh career victory in the rain-shortened event. Though Smith took the victory, the spotlight was never really on him as during the race Ty Gibbs and Joe Graf Jr. got into it on the track that resulted in the pole-sitting No. 18 pounding the outside wall.

“I don’t even know who that guy is or what happened out there,” Gibbs said. “We had a really great car. I am pretty bummed. Most of all I am sorry for my guys, the deserved a win here tonight.”

The ARCA Menards Series has one race remaining in two weeks at Kansas Speedway. Self has a 20-point deficit to make up at the track where he earned his first career victory at in 2017. The ARCA Kansas 150 will go live on Fox Sports 2 at 8:30 p.m. ET and will be shown tape-delayed on Fox Sports 1 at 11:30 p.m. ET. – Christian Koelle

The past week has been a pretty busy one for new cars being announced.

Chevrolet surprised the motorsports world by unveiling the new Chevrolet Corvette C8.R at Kennedy Space Center in Florida.  The real unveil on the schedule for that day was the new Corvette convertible, but attendees were greeted with this silver race car as well.

The No. 4 Corvette will race full-time in 2020 with the silver colors.  The No. 3 will continue in the yellow colors that Corvette Racing has used since 2000.

In Michelin Pilot Challenge news, Mazda Motorsports unveiled the Mazda3 TCR, which has been rumored for the past couple of years.  The car, which is based on the Mazda3 hatchback, will make its racing debut in the BMW Endurance Challenge at Daytona in January.

We’re thrilled to welcome the latest addition to our #MazdaMotorsports family: The all-new Mazda3 TCR. The car will hit the racetrack as part of the 2020 @IMSA Michelin Pilot Challenge. We look forward to providing @MazdaUSA customers with another avenue to race #Mazda vehicles. pic.twitter.com/h8i8LjBbTc

For now, the car is only confirmed as racing in Michelin Pilot Challenge but should be eligible to compete in TCR series around the world.  The second market likely to get the race car will be Australia, where the Mazda3 is one of the best-selling passenger cars.

There are no teams that are confirmed as fielding Mazda3 TCRs as of yet, but there is one driver that is confirmed in a Mazda for 2020.  That is Bryan Ortiz, a former NASCAR Drive for Diversity racer who competed in the K&N Pro Series East.  He won the Battery Tender Mazda MX-5 Cup championship this year and earned a full-time drive in Michelin Pilot Challenge via a $200,000 scholarship.  Ortiz has some previous experience in TCR equipment, having raced in SRO America’s TCR class part-time last year. – Phil Allaway