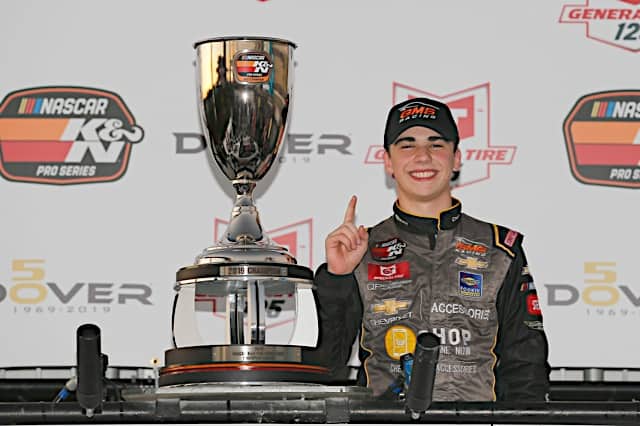 Mayer will defend his title in the newly re-branded ARCA Menards Series East next season. Mayer noted that division is of foremost importance to him and his GMS Racing team.

In addition to winning the series championship this season, Mayer has four career East wins, 13 top fives, and 14 top 10s in 14 races.

Additionally, Mayer will compete in ARCA Racing Series Showdown. The Showdown, newly re-branded from the ARCA Menards Series Sioux Chief Short Track Challenge, will consist of 10 races within the 2020 ARCA Menards Series schedule, and it, like the Short Track Challenge, will crown its own champion as well. Therefore, Mayer will compete for two championships next season.

The 2019 Herr’s Potato Chips 200 at Lucas Oil Raceway was Mayer’s 10th career ARCA start. In 10 starts, he has a career-best finish of second place at Salem Speedway in April. He has nine top-10 finishes, including third place in the most recent ARCA race at Lucas Oil Raceway.

Lastly, Mayer will make five starts in the NASCAR Gander Outdoors Truck Series next season. Those races will be on tracks one mile or shorter because of his age, but the exact races Mayer will compete in the Truck Series will be announced at a later date.

Speaking about his 2020 plans, Mayer said, ““Everything is going according to plan right now so GMS Racing wants me back next year. We’re definitely performing as we should and I feel like we can get more wins next year with them. Every ounce of stock car racing I’m doing right now will be with GMS Racing and I cannot be any happier to be with them.”

“I drove for JR Motorsports last year so my relationship is already amazing with them,” Mayer added. “They love racing with me and having me on their team. I, too, love racing for them because they give me the best equipment possible. Having that relationship is definitely going to help me up through the steps going into Trucks with GMS Racing and maybe even the NASCAR Xfinity Series with those guys.”