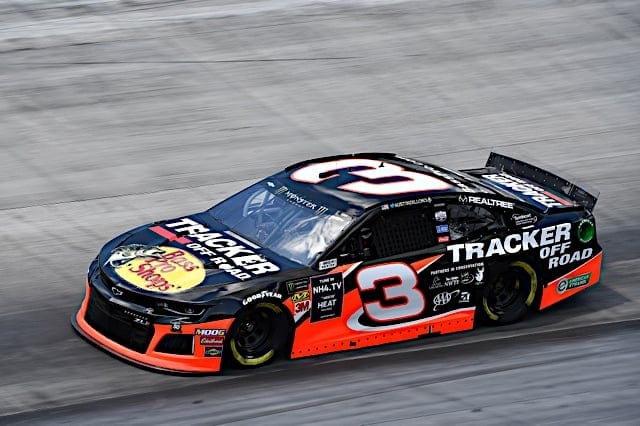 Richard Childress Racing is celebrating its 50th anniversary in 2019.  Starting out as an owner/driver, Childress built his organization into one of the mightiest teams in NASCAR history.  His achievements with Dale Earnhardt at the wheel of the No. 3 Chevrolet are the stuff of legend.

But as great as RCR has been over most of its existence, the last five seasons have been anything but great.  With a new driver lineup in the works for 2020, Childress’ team is facing an uncertain future.

Last month, RCR made the surprising announcement that rookie Daniel Hemric would not return to the No. 8 team.  The team then confirmed last week that his seat will be filled by Tyler Reddick, who will compete for Rookie of the Year in the Monster Energy NASCAR Cup Series come 2020.  Reddick, the 2018 Xfinity Series champion, is once again contending for the title in that division.  Through 29 Xfinity Series races, Reddick has posted five wins and an incredible 24 top 10s.  With those numbers and last year’s championship in hand, he’s earned a shot to compete in NASCAR’s premier division.

However, Hemric looked ready for the Cup Series at this time last year.  He might not have won any Xfinity races in 2018, but he was one of the other three drivers who battled Reddick for the championship at Homestead-Miami Speedway.  Moreover, Hemric earned 16 top fives compared to Reddick’s seven, as well as 23 top 10s compared to Reddick’s 20.  In a division that is often overrun by Cup Series regulars, Hemric’s stats from 2018 are perfectly respectable, wins or no wins.

It is a shame to see RCR cut Hemric loose after one season, especially when there is no guarantee that Reddick will run any better next year.  In the first place, it took Reddick time to adapt to finishing well in the Xfinity Series on a consistent basis.  Don’t let the championship fool you.  Reddick may have had a fantastic finish to the 2018 season by keeping his nose clean through the playoffs, but he tore up a lot of equipment during the spring and summer.  Admittedly an aggressive driver, he will face a steep learning curve while figuring out how to conserve his equipment in the longer Cup Series events.

Additionally, the Cup Series has not been kind to rookies in recent years.  The 2019 campaign is the sixth season to utilize the elimination-style playoffs with 16 drivers.  That’s more than half of the full-time drivers competing this year.

Yet Hemric didn’t even come close to making the playoffs this season, despite his strong results in the Xfinity Series.  Fellow rookies Ryan Preece and Matt Tifft fared even worse.  In fact, the only rookie drivers who have reached the playoffs under the elimination format were Chase Elliott and Chris Buescher in 2016.  Anyone who is under the impression that Reddick will not face the same hurdles that every other recent rookie, including Hemric, has faced is sorely mistaken.

Yet whatever challenges Reddick may face as a developing driver and Cup Series rookie, they pale in comparison to the problems that his team must resolve if it is going to be competitive.  RCR deserves to celebrate its 50th anniversary and achievements of the past.  But the trouble is that so many of its greatest accomplishments are in the past and have little relevance to the organization as it exists today.

Even since Kevin Harvick and Jeff Burton left at the end of the 2013 season, RCR has looked like a rudderless ship.  This was a team that regularly competed for wins and championships less than 10 years ago.  Post Harvick and Burton, the team has earned a measly three wins in nearly six seasons: two by Austin Dillon and one by Ryan Newman.  In the annals of Richard Childress Racing history, the 2010s must be acknowledged as a period of decline.

Certainly, it hasn’t been all bad since 2014.  Newman nearly won the championship that season before getting outrun by Harvick with his new Stewart-Haas Racing team.  And what Dillon lacks in the number of Cup Series victories, he makes up for in winning marquee events.  If you could pick two NASCAR races to win, the Daytona 500 and Coca-Cola 600 would probably be on a lot of peoples’ lists.

However, any forward progress that RCR was making in the last few seasons has come to a screeching halt in 2019.  After making the playoffs for the last three seasons, Dillon was expected to at least contend for a playoff spot again.  Instead, he stands 22nd in points with only four top 10s 30 races into the year.  Compare that to Harvick who, in his last season at RCR, finished third in points with four wins, nine top fives and 21 top 10s.

Yes, Harvick alone won more races in his last year with RCR than the entire team has won since his departure.

For the time being, Childress seems content to rely on young drivers to turn his team around.  But there’s a strong argument to be made that RCR needs a veteran presence.

Roush Fenway Racing, a team that has experienced a similar decline, tried to rebuild with Ricky Stenhouse Jr. and Trevor Bayne after the departures of its accomplished veteran racers.  Newman replaced Bayne this season and raced his way into the playoffs.  Even though Newman was eliminated last week, it is safe to say he exceeded expectations for what the No. 6 team and RFR could accomplish this year.

Stenhouse, of course, was once tapped as the future of RFR, the driver who would lead the organization to wins and championships.  In nearly seven seasons, the only things Stenhouse has led RFR to are a pair of wins and one playoff appearance.  He, too, is seeking a new ride for 2020.

No doubt Childress has a lot of faith in Dillon, but his NASCAR career has shaped up to be a lot like Stenhouse’s.  Both have experienced success in the lower series but have never challenged for victories consistently.

What RCR may need more than anything else is the type of veteran racer who can elevate the team’s results and improve its equipment.  Dillon could turn into that type of driver someday, but it is unlikely to happen anytime soon.  And next year, he will once again be paired with a rookie teammate.

Ever since Harvick and Burton left, Richard Childress’ team has been stuck in a perpetual rebuilding phase.  Contending for championships, once a regular expectation for the team, has become an afterthought for an organization struggling just to get to victory lane.  Amidst the 50th anniversary celebrations, it feels like Childress is trying to recapture a past that is, sadly, gone.  While pining for the glory days of Earnhardt, the team can only fight through the remainder of a difficult season, knowing that it will once again start over in 2020.

Austin Dillon may have 2 cup wins, but if memory serves, he had to wreck the lead car, rather than a clean pass to win?

Childress is getting what he deserves for allowing his nepotism to override common sense. Dillon is not a top tier driver. He never will be. Until Childress takes his grandfather hat off and puts his business/competitor hat on, he is destined to be a second tier team.

Agree. Dillon got lucky and won his first race on a fuel mileage guess. Only 8 stayed out and Dillon feathered the gas the whole run. He got his only other win by slamming Almirola out of the way on the last corner. Since then he’s just a twentieth place car while getting the best cars grandpa can build for him.

So if your going 190 and another car cuts in front of you it’s either wreck him or get wrecked. Grow up and stop the whining. Remember what Brad done to Carl. Ok then

Brad had already taken the position and Edwards thought he could bully the rookie. Brad didn’t lift. I’m glad. Almirola wasn’t blocking, he already had the position because Dillon pushed him up there, huge difference. I don’t see how Childress keeps that car sponsored. Richard had his north Yellowstone ranch for sale for 12 million for 8 years, finally got 5 million for it last year. Maybe he’s using that money for Austin.

Part of the problem at RCR is the fact that since the 90s, HMS has been the default Chevy team. Starring with Junior Johnson in the 70s/80s, Chevy has always had a favored team; it was Junior in the 70s/mid 80s, RCR from the mid 80s to the early/mid 90s, (which is why Junior switched from Chevy to Ford for the 89 season), & HMS ever since. As long as they stay committed to Chevy, they’ll play 2nd fiddle to HMS. Even SHR switched from Chevy to Ford, & they were an HMS satellite team. But, they knew that with Chevy they’d never be anything more than an HMS satellite team.

There’s been rumors swirling since last year that Dodge may return & have been talking to Childress. We shall see. I do agree that having average, (at best), drivers & rookies isn’t helping.

Bill B
Reply to  MarkM

Everything you said made sense except for “Even SHR switched from Chevy to Ford, & they were an HMS satellite team. But, they knew that with Chevy they’d never be anything more than an HMS satellite team.”
How does Ford differ? I mean, how do they keep both Penske and SHR (and presumably Roush as well) feeling like they are both number 1 when there can only be 1 number 1? Why can’t the same work for Chevy?

If giving rides to your grandkids is what makes Richard Childress happy, despite the fact that hey are mediocre talents at best, then who are we to tell Richard who he should and shouldn’t hire or how to spend his money? Obviously, he doesn’t care if the #3 team wins championships anymore, he’d rather watch his grandson race. More power to him, I guess.

What surprises me more is the sponsors sticking around.

Your right. But we can sure make fun of him and laugh at how bad his grandkids are all we want. Richard is the one that has to cringe while smiling.

I was going to say the exact same thing. LOL