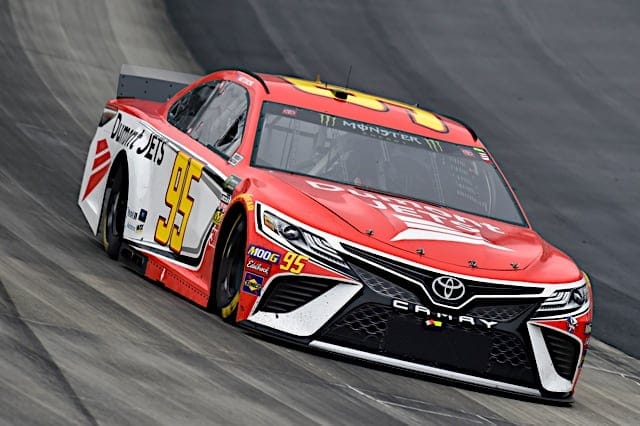 Matt DiBenedetto is going to lose his underdog status next year when he moves to the Team Penske-supported No. 21 car for the Wood Brothers team. At this rate, we could probably pull his card now.

The No. 95 Leavine Family Racing driver was again one of the frontrunners at Dover International Speedway on Sunday (Oct. 5) in the Drydene 400, finishing seventh. The result was DiBenedetto’s best finish at Dover by a long shot. In fact, prior to this season, DiBenedetto had never finished better than 27th on the one-mile oval.

After the race, DiBenedetto spoke about his day and the team’s overall goal for the rest of 2019.

“All day, inching forward, little by little,” he said. “That was the team, just so you know. Wheels [crew chief Mike Wheeler] and my whole group, pit crew, everybody, making really good adjustments. This was the first time we’ve had Dumont Jets on the car in quite a while and I was like, ‘this Dumont Jets car is flying.’ But no, it took a lot of discipline today. The car was really fast. Even faster than seventh place, but you get in situations with the dirty air and with the high downforce it was a lot harder to pass. The fastest drivers had to be a lot more disciplined. You had to stay behind them and not abuse your stuff and wait for traffic or situations to pounce.”

He also touched on what performances like his one at Dover have meant to the team.

“It’s been big,” he said. “It’s really neat. I love working with this team. They are such good people. I’m so appreciative to work with them. I’m so glad this whole second half of the season has really turned around where we have been knocking off a bunch of top 10s, so it’s really important to us. We’re trying to get in the top 20 in points. We’ve been climbing up big time the second half of the year running where we probably deserved to run. I hate that we aren’t in the playoffs, because we have been contending like a playoff car. But it is what it is. I’m just thankful we’ve had some good solid runs. This Toyota has been running fast.”

Behind DiBenedetto, it was a tough day for the rest of the underdogs. Ryan Preece managed to finish 19th, and rounding out the top 20 was Bubba Wallace. Ty Dillon was the only underdog to lead a lap as he held the top spot for one circuit during early green flag pit stops. He wasn’t able to get much else out of his day at Dover, winding up 23rd at the checkered flag.

The Xfinity Series hit the concrete high banks on Saturday afternoon, with some of the underdog class logging in solid performances. Ryan Sieg finished the day in 10th position but was disappointed that it wasn’t enough to advance to the second round of the playoffs.

Most of the races discussed in this segment are unexpected victories by unlikely drivers and teams. But this is a different story. This is the story of a driver and team who did almost everything right but came up just short in their pursuit of glory.

We’ve profiled the Stavola Brothers Racing team in a previous installment of History Lesson. They were the owners of Bobby Hillin Jr.’s car when he pulled off a surprise win at Talladega Superspeedway in 1986. Bobby Allison also ended up with a few wins for the team, but when his career ended in 1988, so did the competitive finishes. The No. 8 team had some good drivers, like Sterling Marlin and Jeff Burton. They just couldn’t break out of the middle of the pack to compete for wins.

In 1996, Hut Stricklin signed on with new sponsor Circuit City to drive the Stavola Brothers Thunderbirds. Stricklin had limited success in his career, and both he and the team both looked to better their fortunes.

But 1996 didn’t pan out the way either had hoped. Through the first 22 races, Stricklin finished in the top 15 only twice with a best of 11th at Bristol Motor Speedway in March. Then came the Southern 500 at Darlington Raceway.

Stricklin was solid throughout the race, but when he took the lead just after halfway, he began to assert his dominance. Stricklin led the most laps, finding himself in front for 143 of the final 175. But late in the contest, Jeff Gordon had done a better job conserving his tires and began to chase down the Circuit City Ford. With 16 laps remaining, Stricklin could no longer hold off Gordon’s charge. He finished a career best second, but it was little consolation for a driver who very well should’ve picked up his first win.

The Stavola Brothers folded their Cup team after the 1998 season, when they parted ways with Hut. While he continued to race for six more years after his Darlington near miss, Stricklin would never again finish in the top five in a Cup race.

7th place today! The ol @DumontJets car was FLYING today. Get it? Hahaha. Car was awesome. Team kicked butt to fight our way up there all day
?: NKP pic.twitter.com/FFPuT3wMgS

Roller coaster of a day at Dover Speedway but ended up wirh a top 10 finish. We got caught 2 laps down with an untimely caution after we had made a green flag stop but proud of the team for never quitting. Looking forward to closing the season strong. pic.twitter.com/gRxcxa5lSx