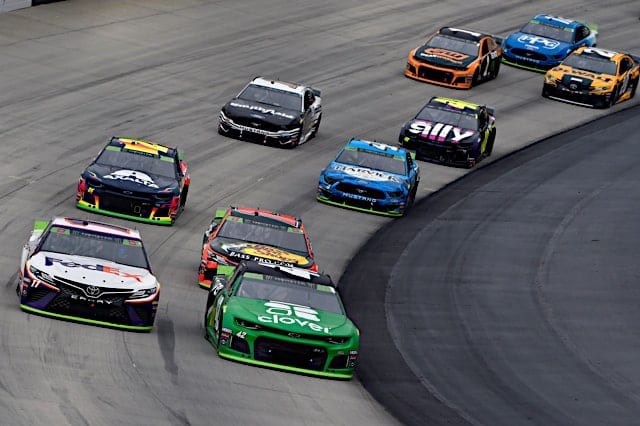 At this point of the NASCAR season, there aren’t really any surprises. The majority of the top-tier rides that are changing hands have been announced, and most of the action can be pretty accurately determined beforehand. The same group of drivers will be up front, while no one can pass anyone else on the track.

While this was Kyle Larson‘s first win of 2019, going back to the July Daytona race, if you throw out two wreck-related 33rds, his worst finish is 13th at the Charlotte ROVAL. That’s nine top 10s in the past 12 races. For the season, Larson has a pole, five stage wins, seven top fives and 15 top 10s. The Chip Ganassi Racing driver is farther into the postseason than he’s ever been before, now locked into the semifinals.

Team Penske had a rough day. Ryan Blaney‘s race ended early after a suspension problem left him 35th in a 38-car field. Joey Logano didn’t run much better, having to go to the garage before the green flag dropped and spending the race more than 20 laps down, angering former teammate Denny Hamlin in the process. Brad Keselowski ran 11th, even though he was off the lead lap by the end.

Larson’s CGR teammate Kurt Busch has cooled off considerably, thanks to a miserable September that saw a best finish of 18th at Richmond. But he still rallied for a ninth-place result on Sunday, his 15th top 10 of the year to go with a Kentucky win, three stage wins and five top fives.

For his career, Busch now has a dozen top 10s in 39 starts at Dover, including three of the past four races. Nine of those career top 10s were top fives as well.

While Ricky Stenhouse Jr. had a decent day by this season’s standards for him, finishing 16th (well above his average finish of 20.6), his fellow lame duck driver Daniel Hemric ran 21st, which is still better than than his average of 23rd. While their rides at Roush Fenway Racing and Richard Childress Racing has already been filled for 2020, their fates are currently unknown.

Matt DiBenedetto reeled off another top 10 for Leavine Family Racing again this week, his seventh time this season to accomplish that, with three top fives. The No. 95 is averaging an 18.7 finish this year, which is by far the best in team history.

Front Row Motorsports has been disappointing this year, and David Ragan‘s final full-time season has been no different. The No. 38 car ran 27th on Sunday, which is slightly worse than Ragan’s season average of 26.1. He has only five finishes within the top 20 and a best finish of 15th, along with five DNFs.

The Harvick Beer scheme was hilarious to see on an actual car, given how diecasts and video games use the driver’s name instead of beer advertisements (since they’re both primarily marketed towards a juvenile audience). So Kevin Harvick‘s No. 4 obviously gets the Paint Scheme of the Week.

Since Anheuser-Busch decided to promote Busch over Budweiser several seasons ago, I’ve always thought that seemed unnecessarily complicated, given the success of Kurt and Kyle, and that Budweiser is a far more well-known brand. Also, it feels like every other race car is blue, so the Bud red stood out.

@MonsterMile I am genuinely curious. Not trying to be facetious

Miles the Monster is a cool trophy, and the gold skin for the track’s 50th anniversary is a nice touch. But former Frontstretcher John Haverlin has a good point here: Why don’t they keep a stash of likely winners’ diecasts to replace the one in Miles’ hand?

Read about @RyanJNewman and the No. 6 @Acronis team's weekend at @MonsterMile #CyberFit

As has become a Roush Fenway tradition during October, their cars are using hot pink numbers, which is a nice gesture that clashes horribly with their otherwise-normal paint schemes.

An onslaught of Will Ferrell references will be hitting Twitter this week. Talladega Nights doesn’t hold up very well as a film, but remains popular within the stock car racing community.

While the Xfinity Series is off this weekend, the Gander Outdoors Truck Series and the MENCS go south to Alabama after being up north this past week. Talladega Superspeedway will be sure to eat up vehicles and ruin someone’s championship hopes.

The Truck Series’ Sugarlands Shine 250 will go green around 1:30 p.m. ET on Saturday, Oct. 12, with TV coverage on FOX Sports 1. Austin Hill grabbed his first win of the season at Daytona. Could he repeat at the other colossal venue?

Matt DiBenedetto could make some noise and get his first win. Also, someone will make the rest of the garage furious due to their on-track actions.