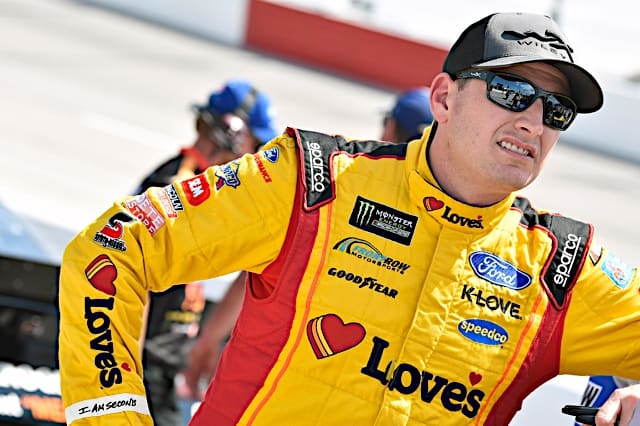 Despite starting the season with a top five in the Daytona 500, 2019 has not been what Michael McDowell expected. He sits 28th in points, two spots lower than he finished the past two seasons, and his average finish is the lowest it’s been since 2015 when he ran part-time for Leavine Family Racing.

But one bright spot happened two weeks ago at the Charlotte Motor Speedway ROVAL. The 12-year Monster Energy NASCAR Cup Series veteran came back from being hospitalized for kidney stones to finish 12th one day later in the Bank of America ROVAL 400.

This past weekend at Dover International Speedway, McDowell spoke to Frontstretch about the struggles in dealing with the kidney stones, the struggles at Front Row Motorsports, the new rules and his 2020 plans

Michael Massie, Frontstretch: So I have to ask about the elephant in the room: the kidney stones.

Michael McDowell: Yeah, that was not fun. Last Friday was rough at the ROVAL. I’ve never had it before so I didn’t really know what they were or what to expect. But it was a painful process. But luckily for me, they went pretty quickly, and I was able to get back to the track that day and still qualify and have a pretty successful weekend.

Massie: Were you scared it was appendicitis or something at first?

McDowell: Yeah, like I said, I’ve never had it, so I didn’t know. I just knew I was in a lot of pain and I was sick and throwing up. There was just a lot going on at once. So they were fearful of appendicitis, but it turned out just to be kidney stones. That’s definitely the better of the two, and I was able to get back to the track that day.

Massie: Do you think it distracted you at all from the race?

McDowell: Not from the race, no. It distracted me from Friday practice because I didn’t get to do it. So I lost a Friday practice, which hurt us in qualifying, which I think does affect the race. But I think, all in all, I’ve been doing this a long time and been very fortunate not to have anything that’s taken me away from a practice or qualifying or a race — that’s the first time. So looking back, you think about, in life, there’s not too many jobs like 0urs where regardless of how you feel, you have to be there, you know what I mean. So like I said, it’s just one of those things you wish didn’t happen, but it did.

Massie: Well, you had your second-best race of the season last weekend. What is it about health issues where a driver steps their game up?

McDowell: Yeah, I don’t know. I mean I’ve seen those trends, too. Like when Brad [Keselowski] at Road Atlanta at the test there and came back and won Pocono [Raceway]. You see that — I think that one is is that, from my situation — not speaking into Brad’s or Kyle Busch when he came back from his broken legs, he went on a tear — but it gives you perspective and it makes you appreciate it. So when you do it every week and you’re in the grind, a lot of times, you just get worn out. But when you have something like that where it potentially takes you away from driving, you just realize how important it is to you and how much you love it.

If anything, it might help you just refocus on that — it’s really cool what we get to do, to give it all you got all the time. But for me particularly, the ROVAL, we knew it was going to be a good race for us. Those are good races for me in general. So it’s not surprising that it was good, and I don’t think it was really inspired by the kidney stones. But it does give you perspective when you’re sitting in a hospital bed and you’re like, ‘Man, I might not be able to race this weekend.’ It just makes you appreciate the opportunity you have.

Massie: How have you felt about the season as a whole?

McDowell: I’m fairly disappointed with our season, in general. Last year, I felt like we were getting some good momentum and finding some good speed. And this year, we’ve had some ebbs and flows and ups and downs. I’m really happy with our group. I really like Drew Blickensderfer and all the guys … It’s taking time to build where we are right now. We’ve shown really good speed in qualifying — a lot of top-10 runs, top-15 runs in qualifying with this new package. Just haven’t quite gotten the balance and feel that I need in the race and in traffic. But we’ve had some good moments, and you build on those. Obviously, the last few weeks have been good, just building some momentum and some consistency. But yeah, we’re not where we want to be, and I don’t think that’s a secret. We all want to be further up in points and further up where we run every weekend. But we still have races left here, and I think we can build momentum going into 2020.

Massie: Do you think adding a third car kind of set the team back a little bit?

McDowell: You know, it may have, it may not. I wouldn’t be the best to really give any comment on that, because I just don’t think about stuff like that. And the reason I don’t is they said we’re gonna run three and we’re gonna run three. So I just go head down, focus on … If I look back and you can ask Donnie Wingo and Jerry Freeze and other guys, they might say, ‘Yeah, that was a big undertaking and maybe it hurt some of our production and just development in general.’ But I don’t know those things to be true, so I just focus on what we can focus on.

Massie: Is there anything you guys have already started doing for next year to make things better?

McDowell: Yeah, you’re always progressing. Obviously, with the rules package coming out this week and there being a lot of development freezes. You had to be pretty proactive in the last few months to make sure you knew what direction you were going into the future so that you could get those things submitted and locked in. We definitely have some things that we’re working on, everybody does. But I do feel good about the direction we’re going. We’re getting a better feel for what we need in the cars. No doubt, it’s hard where we’re at in the sport. We’re racing against JTG [Daugherty Racing], RCR [Richard Childress Racing] and Roush [Fenway Racing], and those are the cars we’re racing around right now with less resources and less people. So I feel like if I look at it from a distance, I go, ‘Hey, we’re doing pretty good.’ If I look at it real close and as close as I am, we’re not achieving our potential. So we still have more to go.

Massie: You mentioned the rules package, and obviously, we’re going to the Next-Gen car in 2021. How will that affect this team? Do you think it will even up the gap at all?

But if you just look at the Indycar model, you’ve got teams like Team Penske and [Chip] Ganassi [Racing] and a few others that are front runners every weekend, and they probably have the most people and have the best preparation. But you also see teams like Dale Coyne and Sebastien Bourdais win races, and they have a lot less people and lot less money to do it.

And so I hope that the Next-Gen car creates that opportunity where when a team like Front Row goes to the ROVAL or goes to Bristol [Motor Speedway] or Richmond [Raceway], that we might have one of those stand-out nights where we can win a race. And I would say in the current landscape, that’s virtually impossible. And we see that with the teams that are around where we’re at right now. You’re not getting a lot of surprise winners anymore. But I’m hopeful that the Next-Gen car will create those opportunities where if you nail the setup and you have a good day and you got a good driver, that you can win a race and not be one of the big four teams.

Massie: What do you think stops those surprise winners? Because I remember in the early 2000s, you had Johnny Benson and Ricky Craven pull off some upsets.

McDowell: Just the technology, people and amount of dollars it takes to be competitive. I mean not that it wasn’t expensive back then, but the rules were more open, so you could hit on one or two things that might give you an advantage going to a particular racetrack. But now we’re in such fine details of getting every last ounce and pound and count of downforce and drag off that the teams that have 400 people and 100 of them being engineers really have an advantage when it comes to wind tunnel testing and building parts and pieces.

I mean we’re 3-D printing parts and pieces, and there’s just so much that goes on that is different than it was 20 years ago. You know you can’t just go build a light-weight car in your garage and build a big motor and go run anymore. It just doesn’t work like that. So I think that’s why you don’t see it. Talladega [Superspeedway], Daytona [International Speedway], you might see it. Road courses, you used to see it. But even now, it’s not because all the drivers are really good and the teams are still way ahead, even at the road courses. So I’m hoping that that Next Gen car is that point where, for myself, I can go win a couple races. And if you have quality people, I think that should be an option, where right now, it’s virtually impossible.

Massie: Are you signed up to drive for Front Row Motorsports again next year? Or have you been approached by any other teams?

McDowell: I probably better not to go into details on it. My plan is to be here next year, and hopefully, that all works out.