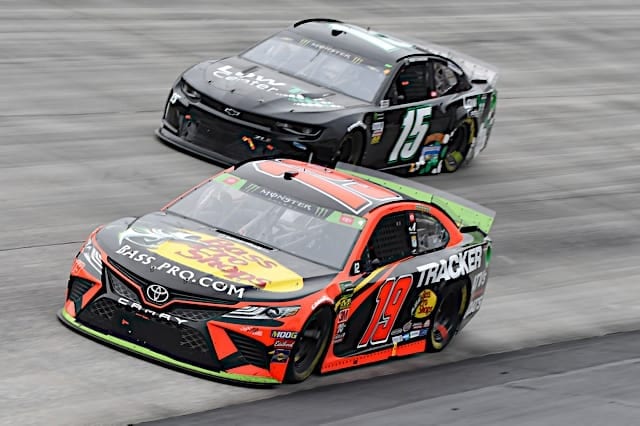 For the first time in 75 events, Kyle Larson took home a Monster Energy NASCAR Cup Series checkered flag last weekend at Dover International Raceway. As the only MENCS competitor locked into the next round of the playoffs, Larson won’t have to worry about the impending chaos of Talladega Superspeedway. However, he did end up barrel rolling down the back straightaway on the last lap of the spring race at Talladega earlier this season. Will he keep all four wheels on the ground this time?

In a shocking sequence of events, Alex Bowman avoided any sort of visible conflict with any other competitors, something that had not been done in three weeks. Reaping the benefits, Bowman increased his playoff stock as the No. 88 Chevrolet crossed the finish line. With this result being his 10th top 10 of the season, can Bowman better the competition this weekend?

While Bowman avoided conflict at Dover, Joey Logano found it. After a bizarre parts failure sidelined the No. 22 for the first 22 laps of the Drydene 400, Logano was criticized by many of the frontrunners after racing them hard in the waning laps. With all the finger-pointing after Dover, will this carry over for Logano at Talladega?

Although he failed to make the playoffs, the ever-popular Matt DiBenedetto impressed his fans with a hard-fought seventh-place finish. Arguably one of the best superspeedway racers statistically this season, DiBenedetto will look for another good finish for Leavine Family Racing at Talladega. With Dibenedetto changing teams this upcoming offseason, is it feasible to say that he has a legitimate shot at getting LFR their first win this weekend?

Despite having a disastrous pit stop after a big fall by his rear tire changer, Truex bobbed and weaved through lapped traffic to rally back up to second. Unfortunately, it was lapped traffic that also proved to be a hindrance for Truex as he tried to capture the most important position: the lead. As the slower cars got in his way, Truex couldn’t muster up first place in the race, but the No. 19 driver still sits first in our Power Rankings this week.

He wants to seal the deal at Dover once more.@MartinTruex_Jr takes over P2. pic.twitter.com/UREjPpzZgj

Hamlin celebrated his 500th start at Dover with the team that gave him his first start and all 498 starts in between. While he hoped to top the celebrations and join Richard Petty and Matt Kenseth as the only MENCS drivers to win in their 500th, the celebrations were halted as Hamlin became irked at the lapped car of Logano for refusing to yield to the fast No. 11 machine, which may have cost him a better finish. Despite the issues, Hamlin brought home his FedEx Toyota home in fifth.

You know you have made it when you have a beer named after you. Enough said.

Anyone else wanna crack open a #HARVICKKKKK when they look at this ??! ? @BuschBeer | @KevinHarvick pic.twitter.com/zY9HPvG1tJ

Think about this for a second. On pole day, Larson was absolutely crushed when Hamlin won the pole after he declared to Hamlin that he would win the pole. To make matters worse, Hamlin’s pole-winning effort forced Larson to postpone his tee time down at the links, a disaster for any avid golfer.

But then… on race day, in the ultimate act of redemption, Larson stormed passed Hamlin to claim a much-needed victory. With a no-steering wheel burnout and his wife shotgunning beers, what a difference a week makes.

While Dover has not been the best of tracks for Kyle Busch, the Candyman did slot his Toyota into the sixth position after a mediocre day. Although Rowdy did not make much noise at Dover, it is a guaranteed fact that he will this weekend at Talladega, even though that could just be contributed to the higher speeds. Despite the increased volume, time will tell if that noise will come in the form of front-running performance this weekend too.

That’s about all I could get out of our @interstatebatts Camry. It doesn’t help when u speed on pit road, we were able to recover n drive our butts off to get back to where we did. Adam n the guys did a great job getting it ready 2 race, made some good adjustments n executed well pic.twitter.com/iV07yuENfv

Although he did actually stay away from conflict this race weekend, Bowman still had water splashed on him. But, this act was all in the name of fun and games as the ever-sneaky Corey Lajoie pulled a fast one on the showman in the media center. Remember when Hendrick Motorsports cars carried primary sponsorships from Aquafina? Perhaps Bowman is making a case that it should come back.

According to the man himself, Keselowski is actually excited to go to Talladega for a playoff race. He might be alone on a desert island because he is possibly the only playoff driver to possess such excitement. However, this excitement is perhaps viably justified. After all, Keselowski has five wins at the Alabama track, the most of any active driver. He deserves to have confidence.

Held serve today in the first round of the nascar playoffs with an 11th place finish.

Now on to a track I’ve been looking forward to for awhile now @TalladegaSuperS ?????? pic.twitter.com/eDA29ineH3

According to a “credible” expert, Logano was in a position to get the 24 free passes. Unfortunately for Logano, 24 other drivers finished off the lead lap ahead of him. But, he deserves an A+ for driving the wheels of his No. 22 Ford.

Elliott got eight laps out of his ill Chevrolet before his powerplant let go. With a seven-point deficit to the playoff cutline, Elliott heads back to Talladega as the defending winner. Can Georgia’s favorite son traverse back into Alabama and sweep the season at Dega?

COME HERE I NEED YOU IN DELAWARE pic.twitter.com/dFF8tUtiAs

Like Elliott, Byron hopes to capitalize on the treacherous Talladega circuit. While he does not share the same deficit in points as his teammate does, he does face a significant age deficit to Elliott, thus it might be a good idea to keep young Byron out of the Talladega infield. Just saying.

On this week’s edition of Bowyer’s social media chronicles: Brett Griffin’s hatred of fantasy football, a school bus, and Harry Hyde’s bullet hole in the side of the Dover garage.

Plus, Cash rides a motorcycle, Cash signs some autographs and Clint gets hypnotized.

So, DiBenedetto finished ahead of big names such as Keselowski, Kurt Busch, Byron, Jimmie Johnson and Aric Almirola. As a reward, DiBenedetto earned a modest $20 for a hard day’s work. Matt, you need a raise.

Wheels is a man of his word https://t.co/sOcx6UgDSg