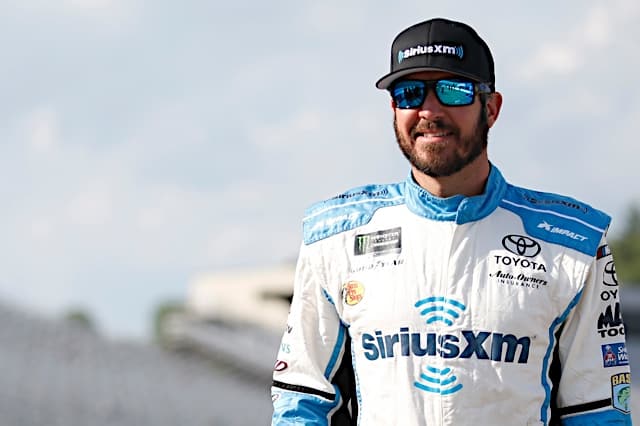 Under the current playoff system, it’s hard to pick a favorite, because one mistake by any driver at Homestead-Miami Speedway can end it for even the most dominant championship contender. But as of this minute, it’s hard to say the road to the title doesn’t go through Truex. His six wins is two more than any other driver, and since the playoffs started, his worst finish is seventh at the Charlotte Motor Speedway ROVAL. While it’s true that two of his teammates have more top fives and top 10s this year, Truex has been nothing but rock steady when it counts, and he and crew chief Cole Pearn are one of the most formidable combinations in the garage.

Like most of the field, Truex has to survive Talladega Superspeedway so that he doesn’t have to worry about points at Kansas Speedway, but a bad finish this week won’t drop him below the cutline heading to the heartland. Along with teammate Kyle Busch, Truex has enough playoff points that he can probably punch his ticket to Homestead, and as of now, he’s the one with momentum on his side. Of course, that can change in a heartbeat — just ask Chase Elliott.

In case you don’t think the title favorite status is still fluid, remember that Busch looked unstoppable early this summer. But he’s been inconsistent of late.  His playoff finishes have been up and down: 19th, second, 39th, sixth. Busch has complained bitterly about the current racecar package, though he had plenty of success with it early on. Has he gotten so wrapped up in those struggles that it’s become a self-fulfilling prophecy? Is he distracted by having not one, but two of his Joe Gibbs Racing teammates keeping step with him every step of the way this year? He’s not used to that.

Now, a win for Busch could easily set him on the right track to a second title, helping him clear his head and enjoy a little momentum. He’s got plenty of points. He’d have to have two terrible races in the Round of 12 or 8 in order not to be in the Champion 4. But he’ll need a little shift in his luck to bring home the big trophy.

The next race is at Talladega, so the answer could be either everyone in the playoffs or no-one in the playoffs, depending on your point of view. On one hand, Talladega is as much crapshoot as race. Any of the contenders could get caught up in a Big One and see any advantage gone. Kyle Larson is safe thanks to his Dover win, and Busch has enough playoff points to be safe this week if disaster strikes. But that leaves even Busch little room for any issue at Kansas. Truex, Denny Hamlin and Kevin Harvick have a cushion as well, but like Busch, one bad race means even a mediocre Kansas could leave them out in the cold. And anyone who doesn’t have enough points to come out on the good side of the cut line can’t rest easy this week.

But, on the other hand, Talladega is a prime opportunity for the drivers near that line to capitalize on anyone else’s issues and vault into a better position before the elimination race at Kansas. Right now, Ryan Blaney is 22 points in arrears, but a good run this weekend could erase all of that if a few others don’t make it to the end.

4. Will we see a multi-time champion emerge?

There is not a driver in this year’s playoffs with more than one title.  The only active driver with more than one is Jimmie Johnson. But five former champions are still in the hunt: Truex, Busch, Brad Keselowski and reigning champ Joey Logano. Logano is currently in danger of elimination, tied on the cut line with William Byron, who currently holds the tiebreaker thanks to his Dover finish. Teammate Keselowski has been solid but his three wins came early this year and he hasn’t looked as strong recently. For sure, their experience in winning a title at zero hour gives them an advantage.

Again, it’s hard to point away from Truex or Busch in particular as title favorites, but Denny Hamlin would like to have a hand in things, and he’s been good enough to do that. If Chase Elliott can rebound from Dover, he might have a shot. If Larson can make good on his Dover win and close when it counts, he’s also a threat. In other words, the would-be repeaters look like favorites, but there are no done deals here.

5. What needs to happen at Talladega?

For those drivers with plenty of points, survival is really the only thing that matters here. A win would be nice, but whether it’s worth the risk is something some teams will decide against. For those mid-pack playoff drivers, even at this point back to Elliott, seven below the cut, they also have to survive, but they also need to race for every available point. They need to take more risks, but they also need to finish the race.

22 points back, Blaney has the toughest rope to walk because, while he can easily erase that deficit if several of those ahead of him get caught in a wreck (which is completely possible), he can also make it a lot bigger if he gets in one himself. He’s almost in a must-win situation as it is, so he can’t really afford to ride in the back and see what happens. He’s the highest risk driver in the playoffs.

But Talladega is also the perfect track for a non-playoff or already eliminated driver to make a statement with a win, and unlike the 12 still in the title hunt, they can take all the risks they want. That’s not to say they won’t or shouldn’t respect the playoff drivers, but they also have every right to run their own agendas. There are a handful of drivers with something to prove: Johnson, Daniel Suarez, Matt DiBenedetto and Bubba Wallace come to mind here.

This week’s race could create a very different picture of the field than the status quo. Hang on.

You do enough to leave a comment on it ;)

Let’s repeat the same things that have been written for the last 15 years.

One storyline no one is talking about is the newfound speed of the Chevys since the playoffs started, and the fact that the Fords seem to have lost the horsepower they enjoyed in the first half of the season.