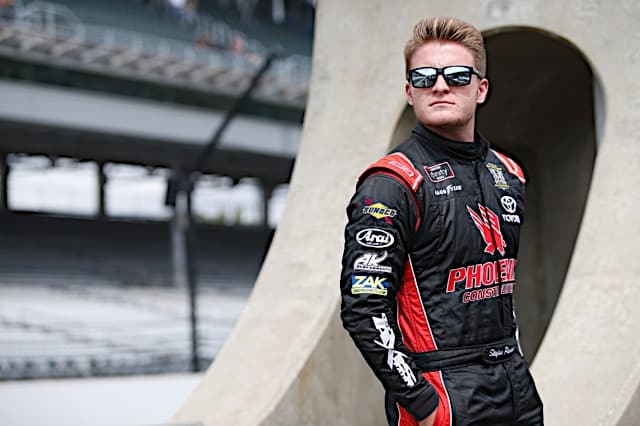 Stefan Parsons was a late bloomer – not in the sense of hitting a growth spurt or maturing later in life, but that he didn’t strap in behind the wheel of a race car until right before his 13th birthday.

Now, to make it in NASCAR is his life.

Parsons, 21, has grown up around NASCAR his whole existence. Former Monster Energy NASCAR Cup Series winner Phil Parsons is Stefan’s father. NASCAR Hall of Famer Benny Parsons, known for winning 21 Cup races and the 1973 Cup championship before dipping his toes into broadcasting, is his uncle. Racing is in the Parsons’ blood.

But in order for Stefan to race, it took a little persuading to his parents from former Cup driver Ken Ragan, David Ragan‘s father, to even get him into a race car. Starting off in bandoleros before moving to legends cars and late model stocks, he’s happy to have started later in his life.

“I was always envious of people my age getting to race,” Parsons recently told Frontstretch. “I look back at it now and I’m thankful that I did start as late as I did, because I’m 21 and I’m just now breaking into [Gander Outdoors] Trucks and Xfinity [series] and I feel like I have more years to prove I belong here, work hard, get in seats and good situations.

This season, Parsons made the jump to run a partial Xfinity schedule after getting his feet wet in the Gander Outdoors Truck Series last year. In five races for BJ McLeod Motorsports this season, the North Carolina driver has a best finish of 12th in his series debut at Daytona International Speedway, along with two additional top-20 efforts, both 19th-place finishes, including one last weekend at Dover International Speedway. His worst result yet is 22nd which came at Darlington Raceway.

The opportunity to race in the Xfinity Series this season came from a meeting with team owner BJ McLeod prior to the spring race at Bristol Motor Speedway. And though racing was agreed upon, Parsons wanted to make an impact instantly, thus he began working for the team.

“I traveled with the team and worked as a mechanic the whole summer, got to know everybody on the team and just be in the garage and be seen,” Parsons said. “That’s really what it’s all about – not only proving that you’re willing to work hard for the sport, but being in the atmosphere and being around. Even if you’re not driving a race car, being there and showing your face is a lot better than sitting at home on your couch for the weekend.”

The persistence of wanting to race and be a part of NASCAR has always been there. Growing up, Parsons learned to be a mechanic by working on his own cars. And though he’s not mechanically inclined to do everything on a race car, in the meeting with McLeod, he wanted to prove he’d do anything it took to be at the racetrack weekly.

Ultimately, all Parsons has ever wanted was the opportunity to compete in the national touring series and prove himself. Here is his chance.

“I wanted to be at the track every weekend and I wanted to work and show BJ and other people that I want this,” Parsons said. “I’m not just going to sit around and wait for an opportunity to come to me, I’m going to try to go out there and get it and work hard to do it, kind of the old-fashioned way of doing it.”

Confidence is something Parsons doesn’t lack. Though he has a total of just nine national touring starts – all for smaller teams by working his way up the ladder – deep down, he believes he belongs. This rings especially true after his respectable 22nd-place run in late August at Darlington, one of the most challenging racetracks in NASCAR.

“I feel like I’ve proven to a lot of people that I am ready for this and I’ve run respectable and proven that I belong here, at least I believe that I do,” Parsons said. “I’ve had other people tell me.”

From a budget standpoint, BJMM isn’t a top-20 Xfinity team. Admittedly so, McLeod believes his team is a mid-20s organization.

Vinnie Miller, the team’s lone full-time competitor, sits 21st in the championship standings and has four top-20 finishes, just one more top-20 result than Parsons. Matt Mills, who has run in 25 of 29 races this year, has five top 20s.

Because of that and Parsons’ willingness to adapt, he believes he and BJMM has overachieved in the times he’s been in the car.

As of now, Parsons doesn’t know when his next race will be. But with an average finish of 18.6 this season, he’s proven he can wheel.