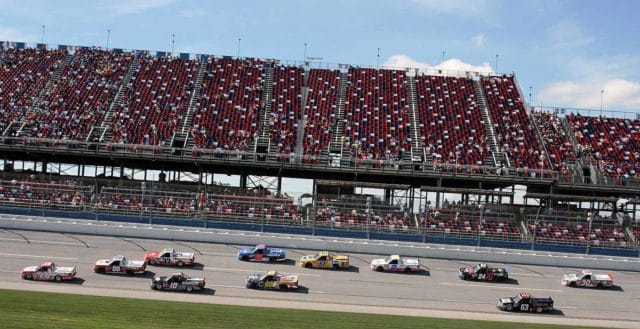 The Gander Outdoors Truck Series heads to Talladega Superspeedway this weekend, and the remaining playoff drivers have just one goal: survive. The series kicks off its Round of 6 Saturday afternoon (Oct. 12), but the good news for the championship hopefuls is that no champion has won at the superspeedway in the same season they won the title.

Another round of the playoffs features a vastly different variety of racetracks in Talladega, Martinsville Speedway and ISM Raceway (Phoenix) ahead of setting the Championship 4 that will face off at Homestead-Miami Speedway next month.

Brett Moffitt currently sits in the catbird seat, though he’s far from safe heading into what is the largest wildcard in the championship battle. He holds a 23-point advantage over Matt Crafton, who is slotted fifth. And while he does have that cushion, one wrong move, whether by him or another driver, could spell disaster for the defending champion. Unfortunately, history does not bode well for Moffitt as he’s never finished better than 17th (Talladega last Fall) in a superspeedway race.

Meanwhile, the drivers who sit second through sixth in the standings find themselves separated by a mere 12 points. Austin Hill leads that group in second, six markers ahead of Crafton. Ross Chastain and Stewart Friesen hold a five- and three-point advantage over Crafton, respectively. Out of this trio of drivers, Hill is the only one with a win at a superspeedway, and Chastain hasn’t run a Truck Series race at Talladega since 2016.

Don’t forget about Tyler Ankrum, either. Despite being quite close to the cutline when the checkered flag flew at Las Vegas Motor Speedway, his championship hopes remain alive. But Ankrum is likely the one who will have the largest learning curve heading into Talladega. After all, he just turned 18 in May, meaning he’ll be making his first superspeedway start this weekend.

None of the drivers in the Round of 6 have previous wins at Talladega. In fact, the only active full-time drivers to visit victory lane at the 2.66-mile oval are Johnny Sauter and Grant Enfinger, both of whom were eliminated after Las Vegas thanks to engine failures Ilmor Engineering accepted responsibility for.

With all of that said, there will be 32 trucks on track when the green flag drops over Talladega. And given that superspeedway races tend to equalize the field and close the gap between the haves and the have-nots, it’s certainly possible that anyone who’s able to avoid any carnage, regardless of whether they’re racing for the championship, could step into victory lane. Interestingly enough, a quick look at the statistics ahead of this race sees Bryan Dauzat leading the way when it comes to average finish at the track following an eighth-place run in this race last season.

In the last five visits to the track, the Truck Series has seen right around 20 trucks finish the race at Talladega Superspeedway. So a team’s ability to make repairs in time under the Damaged Vehicle Policy could turn out to be just as important as staying out of trouble altogether, especially for the championship hopefuls.

And while I’m not saying the six drivers racing for the title are in big trouble here, none of them have enough of a cushion to take major chances Saturday afternoon. In fact, it wouldn’t be surprising to see them group together and try to stay out of trouble to have a shot at duking it out for the checkered flag.

Wow,
No one there.
Waste of a lot of petrol.