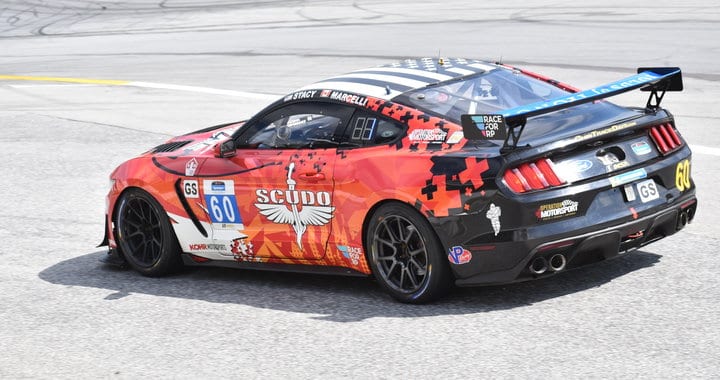 The first practice of the day began at 8:45 a.m. local time under cloudy skies.  These conditions were not really representative of the conditions likely to be experienced during Friday’s two-hour race, but everyone was chomping to get out and sort out their cars.

For much of the session, Moorespeed’s Spencer Pumpelly was quickest in his Audi.  With 14 minutes remaining in the session, Automatic Racing’s Akhil Rabindra turned in a lap at 106.425 mph in his No. 09 Aston Martin.  That lap held up for the remainder of the session to top the chart.

In TCR, KMW Motorsports with TMR Engineering’s Trenton Estep was quickest in his Alfa Romeo with a lap at 103.602 mph, good for 25th overall.  That lap was one-seventh of a second faster than JDC-Miller MotorSports’ Stephen Simpson in the best of the Audis.  Teammate Britt Casey Jr. was third, followed by the Hyundai of Mark Wilkins and LA Honda World Racing’s Tom O’Gorman.

By early afternoon, the sun was out and the conditions were much more in line with race day.  With that in mind, teams were ready and raring to go.

Marcelli turned in his session-topping lap only a few minutes into the session on his second lap at speed.  That lap is nearly two and two-thirds of a second faster than last year’s pole time, set by Compass Racing’s Paul Holton.

Marcelli’s lap was more than four-tenths of a second faster than Motorsport In Action’s Corey Fergus in his McLaren 570S GT4.  Sebastian Priaulx, who is making his IMSA debut this weekend, was third fastest in the Multimatic No. 15, while Park Place Motorsports’ Trent Hindman was fourth in his Porsche.  TeamTGM’s Owen Trinkler was the fastest Mercedes in fifth.

TCR saw Bryan Herta Autosport’s Hyundai Veloster N TCRs top the chart.  Wilkins was quickest in class with a lap at 103.193 mph, good for 23rd overall, but not the fastest TCR lap of the day.  Wilkins’ lap was four-hundredths of a second faster than teammate Mason Filippi.  Casey was third again, followed by O’Gorman and Simpson.

The session was interrupted by a red flag due to a crash for LA Honda World Racing’s Mark Pombo in the No. 52 Honda Civic Type-R TCR.  The team is currently hard at work repairing the car.

A notable absentee from the speed charts all day has been CarBahn Motorsports’ No. 39 Audi for point leaders Tyler McQuarrie and Jeff Westphal.  They chose to sit both sessions out in an attempt to protect their points lead, a strategy used last year by TeamTGM.